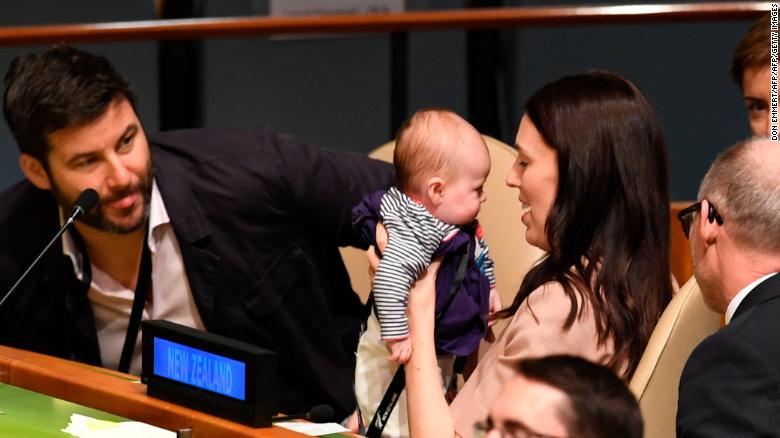 UNITED NATIONS, Sept 25: New Zealand Prime Minister Jacinda Ardern, who gave birth while in office, has made history by bringing her three-month-old daughter into the United Nations assembly hall.

Ardern, 38, was photographed kissing and coddling Neve in the assembly hall next to partner Clarke Gayford at the Nelson Mandela Peace Summit.

Neve looked on as her mother addressed the assembly while Gayford, whom the couple say is the main caregiver for their daughter, held the baby.

Gayford, a television fishing show host, tweeted: "I wish I could have captured the startled look on a Japanese delegation inside UN yesterday who walked into a meeting room in the middle of a nappy change. Great yarn for her 21st," he wrote.

He posted a picture of the baby's mocked-up UN diplomatic photo ID that described her as "New Zealand first baby."

Samantha Power, a former US Ambassador to the UN under former President Barack Obama, tweeted: "I cannot stress how much the @UN - and the governments that comprise it - need this."

Ardern said it was "a practical decision" to take Neve into the General Assembly, according to the New Zealand Herald. 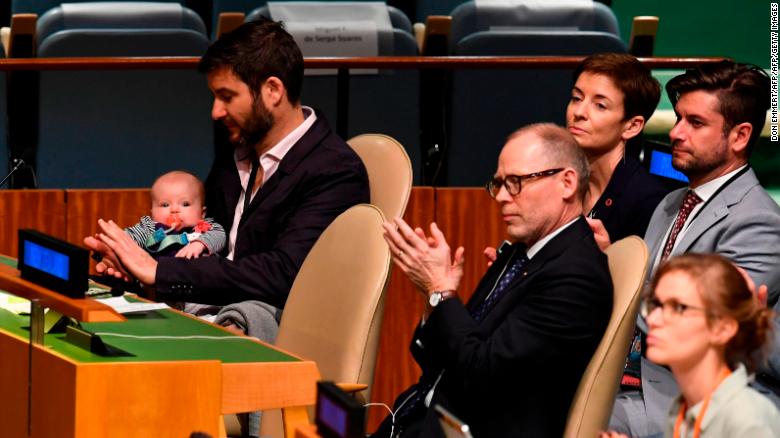 "Neve is actually nearby me most of the time in New Zealand, she's just not always caught. But here, when she's awake, we try and keep her with me. So that was the occasion."

Ardern, the first world leader in nearly 30 years to have a child while in office, has said that she hoped that while she was at the vanguard of leaders having children while ruling, she predicts that "one day it will be normal."

Ardern has a reputation as a parsimonious PM who curbs ministerial expenditure.

"There is no spousal program for this, so we just made a judgment call that we would cover his travel for this trip. He will be going to some things, but he's primarily traveling to care for Neve," Ardern told the New Zealand Herald.

"We are playing it by ear. There is no set plan, it's just whether or not she's getting enough sleep, where I am for feeds. They might be with us a lot, they might just be in the hotel.

"It depends what the jet lag does to them both. She's a good sleeper and we don't know whether that will mean she ends up sleeping a lot in the day rather than the night."

Ardern returned to the office last month after a six-week absence after giving birth, during which Deputy Prime Minister Winston Peters acted as caretaker.

Although Gayford is take care of the main parenting duties, because Ardern is breastfeeding, their daughter will accompany her on official business, the couple have said.

It marked the first victory for the Labour Party in nine years. She led the group for three months before being elected Prime Minister.

In her statement to the UN, Ardern praised Mandela, saying: "If Mandela could make peace, so could the rest of South Africa. That one act of both triumph and reconciliation said so much about who Nelson Mandela was: His capacity to forgive, his commitment to reconciliation, and his ability to lead and inspire against all odds."

KATHMANDU, Sept 18: Prime Minister K P Sharma Oli will be addressing the General Debate of the 75th session of the... Read More...