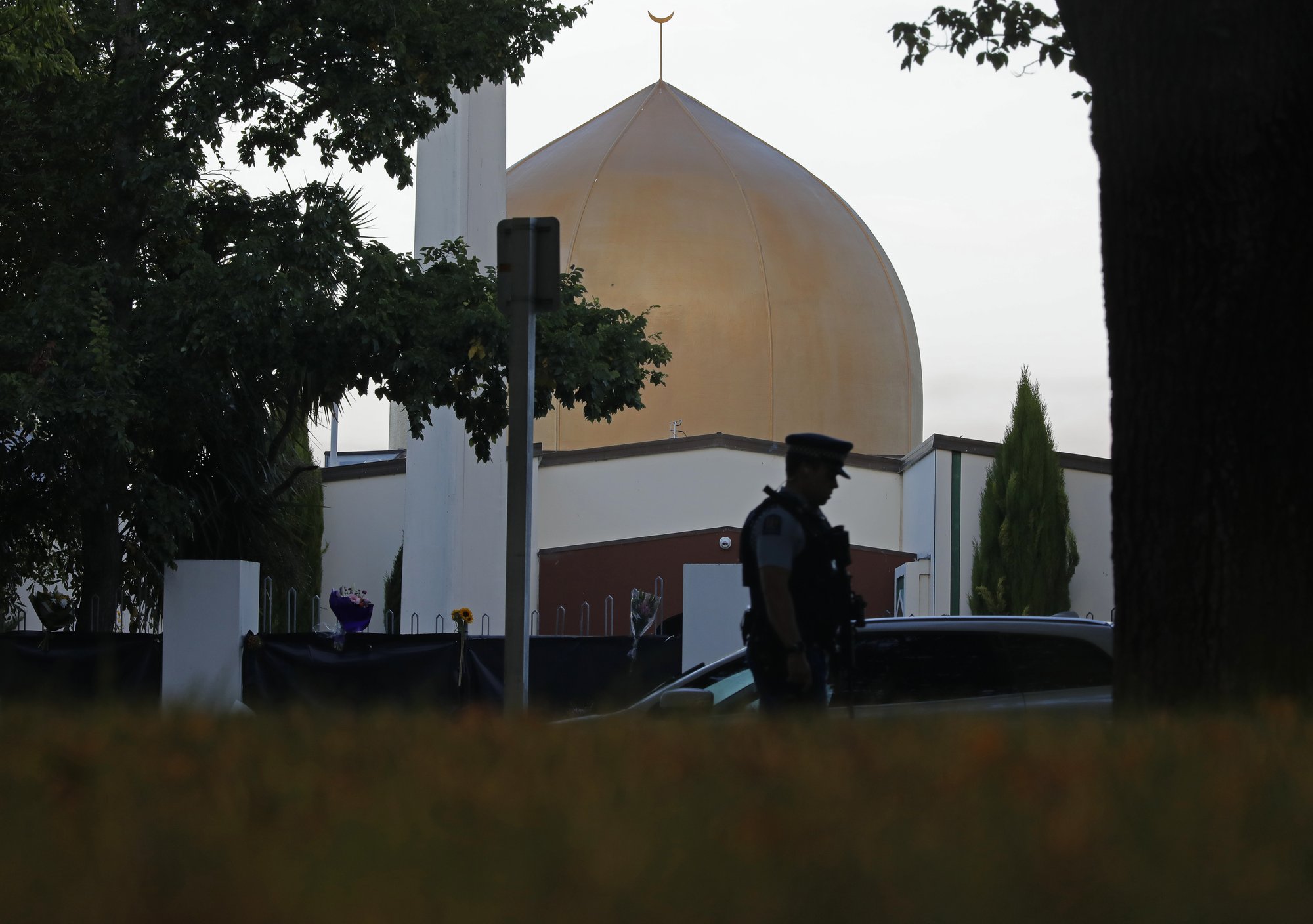 FILE - In this March 17, 2019, file photo, a police officer stands guard in front of the Al Noor mosque in Christchurch, New Zealand. New Zealand's major media organizations pledged Wednesday, May 1, 2019, not to promote white supremacist ideology when covering the trial of the man charged with killing 50 people at two mosques.(AP Photo/Vincent Yu, File)

WELLINGTON, May 1: New Zealand’s major media organizations pledged Wednesday not to promote white supremacist ideology when covering the trial of the man charged with killing 50 people at two mosques.

The five organizations that signed the agreement said they were aware that accused gunman Brenton Tarrant might try to use the trial as a platform to promote white supremacist or “terrorist” views.

The organizations said the commitment extended to coverage of Tarrant’s 74-page manifesto and broadcasting symbolic images. That clause came after Tarrant made a hand gesture at his first court appearance, which is sometimes associated with white supremacists.

Tarrant, a 28-year-old Australian, has been charged with 50 counts of murder and 39 counts of attempted murder following the March 15 attacks in Christchurch. He has not yet entered a plea and remains in a high-security prison in Auckland pending his next court appearance on June 14. His trial will likely get underway next year.

The organizations that signed the agreement include the country’s two main television news stations, its two major newspaper companies, and its public radio station.

John Gillespie, the head of news and current affairs at Television New Zealand, said it would likely be a challenging trial given the number of people affected by the harrowing shootings.

He said the five news organizations didn’t want the accused gunman to be able to use the court as a platform to encourage like-minded people with extremist political views. He said they also wanted to let the judge know they had thought carefully about their coverage.

Gillespie said he didn’t worry that media, which usually compete on stories, were collaborating on the agreement. Each organization would still bring its own voice to its work and pursue its own stories, he said.

“The collaboration was well-needed and timely,” Gillespie said.

But free speech advocates have argued that New Zealand’s Chief Censor David Shanks went too far when he banned Tarrant’s manifesto soon after the attacks. The ban means anybody caught with the document on their computer could face up to 10 years in prison, while anyone caught sending it could face 14 years.

And Danish journalist Claus Blok Thomsen, who works for the Politiken newspaper and covered the trial of Norwegian right-wing extremist Anders Breivik, accused of killing 77 people in 2011, told The Associated Press in March that there are dangers in censoring Tarrant. He said media agreed to similar restrictions in covering Breivik, which pleased many so-called experts but angered some of the families of victims.

“They said when we start to censor ourselves, we just make him into a martyr,” Thomsen said. “We are not able to learn how mad this guy was, what his thinking was, until everything is out in the light.”

Gillespie said he thought the protocols were broad enough that they could show something of what the accused gunman was thinking and the terrible flaws inherent within that.

WELLINGTON, May 21: New Zealand police said on Tuesday they were charging the man accused of murder in shootings at... Read More...