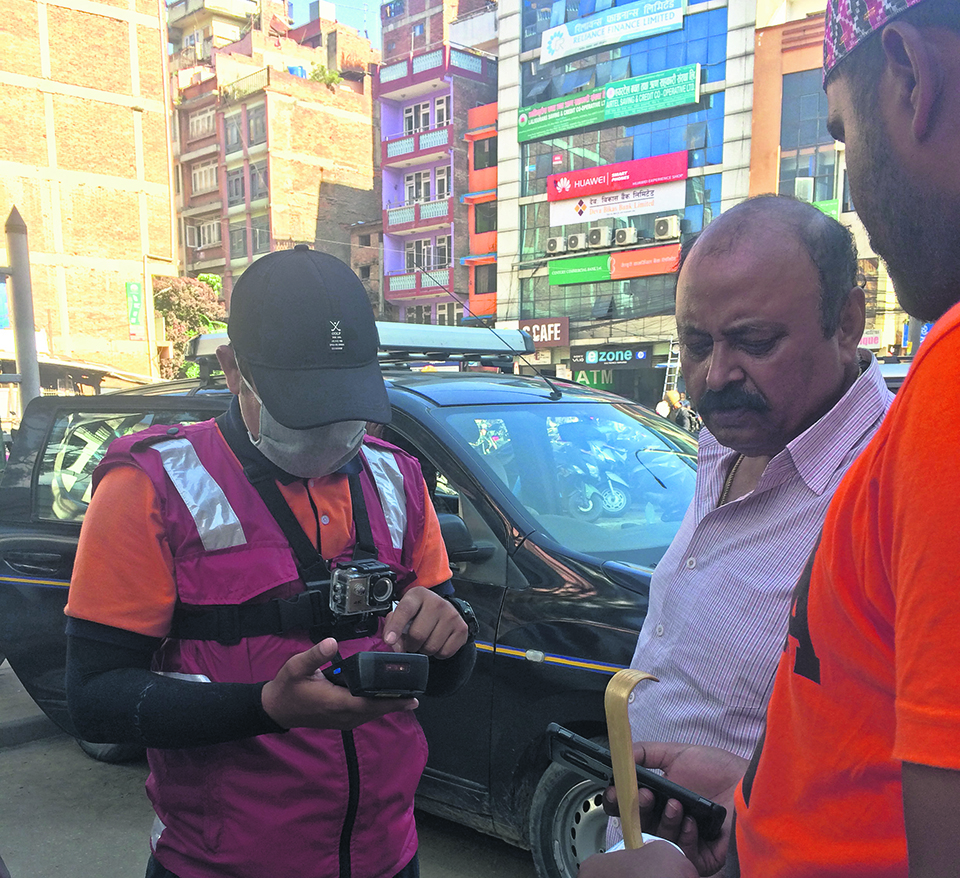 138 parking slots for motorcycles, 50 for cars

KATHMANDU, June 25: With Kathmandu Metropolitan City introducing smart parking system at and around the New Road area since June 16, the management of parking areas and vehicular traffic in one of the busiest areas of Kathmandu has become effective.

Smart parking is a system that allows the public to park their vehicles by booking parking spots through an app called 'Park KTM' that has download size of 6.44 MB and already has over 5,000+ downloads on Google Play [Andriod application distribution service] until Tuesday. The Kathmandu Metropolitan City in collaboration with a company named Wheelers Truly Yours Pvt Ltd initiated this system in order to manage public parking lots in the capital. Initially, it is being implemented at five different alleys including in the areas surrounding Bishal Bazar, Indrachowk, Dharmapath, Pako and outside RB Complex.

Two-wheelers are charged a flat rate of Rs 25 and four-wheelers Rs 80 for up to one hour. Vehicles unparking even a few minutes after one hour need to pay the fee for another full hour.

“The primary objective of smart parking is to provide efficient, safe and easy parking service right at people's phone screens from any location and stop the practice of haphazard parking at random places,” said Ishwar Man Dangol, spokesperson of Kathmandu Metropolitan City office.

Through the Park KTM application one can book a parking spot in the allocated areas. With almost 100 staffs working in five different areas of parking; all these staff were trained for one month by the KMC.

Easily identified by the color of uniform, two types of staff can be seen in the parking areas. The ones dressed in red or orange are volunteers whereas those seen in black uniforms are security staff. The volunteers' job is to issue bills and collect parking fee from the parked vehicles whereas the security staff assist in parking and unparking the vehicles.

Volunteers are equipped with the devices named Point of Scale (POS). When app users book a parking spot, volunteers get notification on their smart devices. These devices have internet connection and SIM cards. POS devices contain full information about how many people booked parking spot and how many spots are available in real time. The amount of space available for parking is also displayed on digital boards that indicate the area for smart parking. These boards are positioned at starting point of each lane.

But many people are still unaware about the new parking system. The parking staff said fewer people have been booking the parking spots through the mobile phone application.

“Around 75 percent of vehicles using the parking spots do not use the app. But recently, due to publicity and media coverage of the new parking system, app users are gradually increasing,” said Binay Dhungana, one of the volunteers working at a bike lane near Dharmapath.

Two-wheelers are charged a flat rate of Rs 25 and four-wheelers Rs 80 for up to one hour. Vehicles unparking a few minutes after one hour need to pay the fee for another full hour.

Some people Republica spoke to in the parking area criticized the charges. “Although the fee is reasonable for those parking their vehicles for longer, it is quite expensive for those who park for only a few minutes” complained Amul Rawal, an app user. “The parking charges for a bike Rs 25 for an hour is too expensive.”

“Some people complain with us about the fees, but we are just workers and do as instructed,” said Kirti Man Maharjan, a parking volunteer.

They said, initial response indicates that the system can be effective to do away with the chaotic jam in the area, if managed properly.

Smart parking system has also helped traffic police officials deployed in the area, which is one of the busiest areas of the city. “Earlier we just used to instruct the people to park their vehicles properly without taking the road space. But, now there are the parking staff,” said Traffic police official Bhim Lal Panthi, stationed at the main thoroughfare of New Road.

Panthi, who has been managing New Road area traffic since the past one year, said he appreciates the parking initiative of the Kathmandu Metropolitan office.

1.6 million doses of COVID vaccine to be administered to people above 55 years
14 hours ago
Supreme Court denies issuing interim order as demanded by the Thakur-led faction to halt EC’s recognition process
15 hours ago