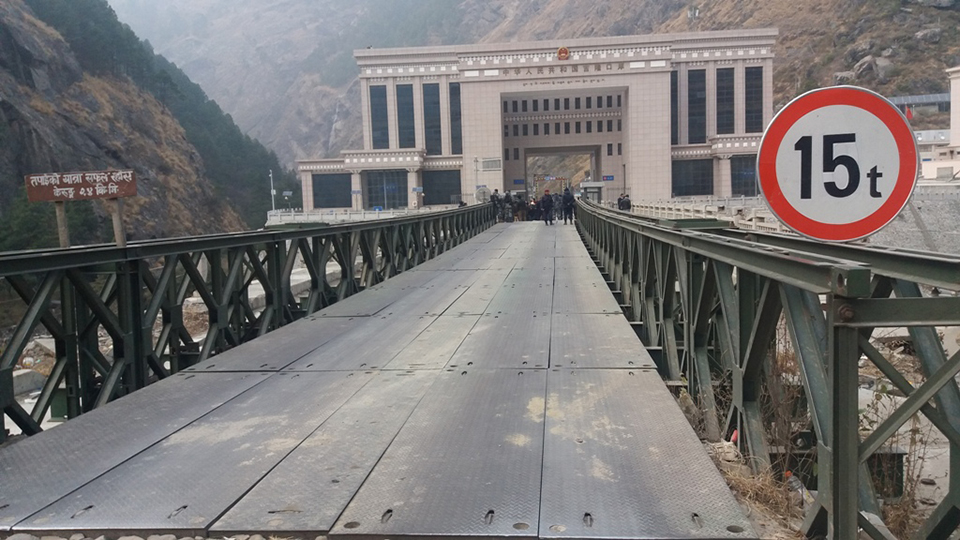 The existing friendship bridge of Rasuwagadhi will be replaced by a new one. | Photo: Himnath Devkota/Republica

RASUWA, Nov 15: The construction of a new friendship bridge that connects Nepal with its northern neighbor China has kicked off in Rasuwagadhi.

This bridge will replace the existing bridge, which has been serving as Nepal's international trade point with China. The new bridge will be constructed 5 meters north from the current bridge. The Chinese government has already laid the foundation of the bridge while the Nepalese side is yet to begin the process. Krishna Paudel, Chief District Officer (CDO) of Rasuwa, informed Republica that preparations are underway to complete the work within six months.

"The Chinese government has already started construction works in the Chinese side of the border," said CDO Paudel, adding," But it might take some time for the Nepalese side as the historic Rasuwagadhi lies on the way of the bridge."

A team from the Department of Archaeology will have to make a field visit of the site so that the bridge would not affect the historic Rasuwagadhi.

CDO Paudel informed that the team would visit the site in a few days as they have already sent a letter in this regard.

Construction of this bridge will enhance relationship between the two countries and play a pivotal role in promoting trade and business. Not just that, this is believed to contribute to the One Belt, One Road initiative of China.

The project should have been started in September and completed by May 2019 as per the agreement between the two countries. Though the work could not start on time, both the teams have aimed to complete it within the deadline.

This bridge will be 114 meters long and 9.5 meters wide. The agreement for the reconstruction was signed on June 21. After the destruction of Tatopani border point due to the 2015 earthquake, this customs point has been serving as Nepal's major trade point with China.