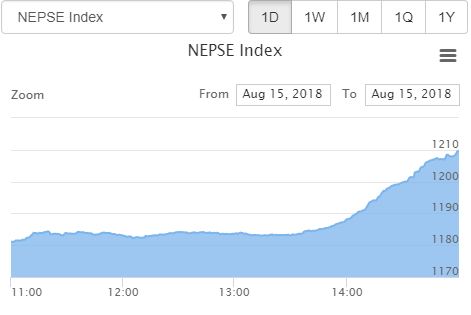 The capital market regulator, which had been witnessing continuous fall, has shown signs of improvement. The Nepse went up 16 points on Sunday, 10 points on Monday and six points on Tuesday.

With the Nepse index climbing up, there is a significant rise in the transaction of shares. Issuing a press release on Wednesday, the benchmark index said a total of 1.68 millions of shares worth Rs 360.162 million was traded in the market today which is the double the transaction compared to that of Tuesday’s.

With all the trading groups ending on a green zone, non-life Insurance group was the highest gainer with 205 points while insurance group went up 129.82 points today.

Nabil Bank made the highest transaction worth Rs 16.8 million while Prime Commercial Bank sold its shares worth Rs 16 million, said Nepse on Wednesday.