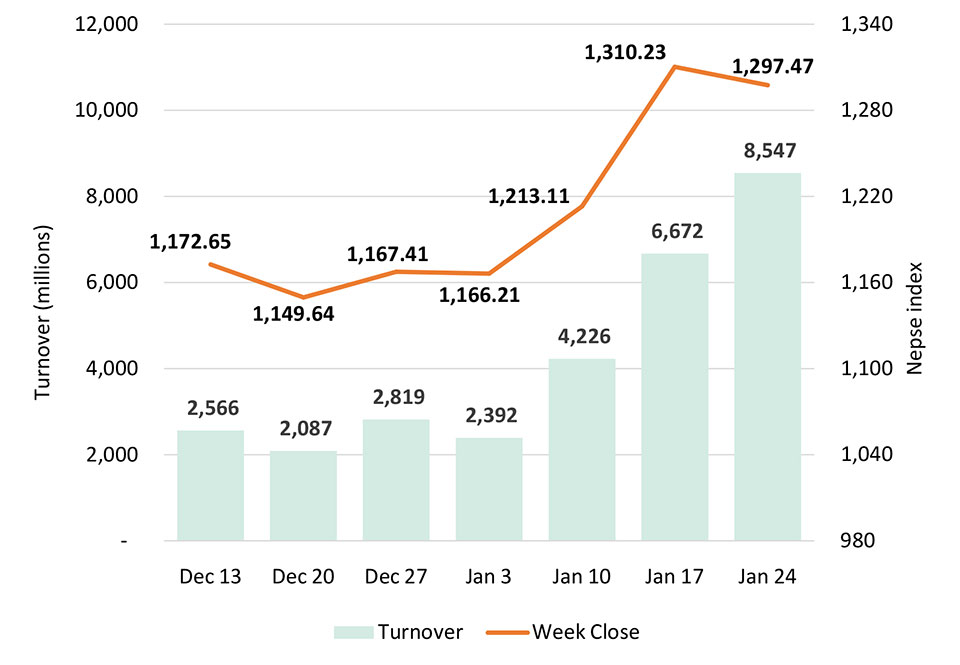 KATHMANDU: Local stock kicked off the week on a remarkably positive footing as the Nepal Stock Exchange (Nepse) index rallied over 33 points on Sunday. However, the index pulled back sharply on Monday sliding over 26 points. While Tuesday was marked by a 3-points gain, equities came under pressure on Wednesday and Thursday. The major average extended its decline with consecutive losses of 7 points and 16 points in the respective sessions. Overall the index closed the week down 12.76 points or 0.97% at 1,297.47 points.

The Nepse index which added almost 100 points in the week earlier, witnessed a modest correction mainly on the back of profit booking seen in most of the traded sectors. The rally which began in the month of December lost some steam in the review period with investors slightly holding back on taking long positions. This is also partly because of the index trading around its yearly highs. On a more positive note, market participation is at its all-time high level. This week the bourse posted a record turnover of over Rs. 8.5 billion.

With the end of second quarter, few commercial banks and microfinances have begun publishing their earnings. So far, micro sector lenders' performances have been firmly upbeat with most reporting substantial year-on-year growths in their after tax profits. However, commercial banks financials remain slightly subdued owing primarily to higher cost of funds and persisting liquidity crunch seen in the past couple of years. Nonetheless, the liquidity situation in the economy is gradually showing signs of easing, which can act as an impetus for the commercial banks to better their performance in the upcoming quarters.

On the ARKS technical analysis front, the market formed a long wick bearish candlestick on the daily time frame as the index pulled back after reaching its 20-month high on Sunday. Weekly Relative Strength Index (RSI) has also reverted from its upward direction which suggests the market losing some momentum. Nonetheless, the dip can only be taken as a correction as long as the index hovers above support zone of 1,280-1,300 points. Hence, investors are suggested to watch these key levels to gauge possible movement of the equity index in the coming weeks.

KATHMANDU: The index fell sharply since the beginning of the trading hour with the Nepal Stock Exchange (Nepse) index losing... Read More...

KATHMANDU: Local came under considerable pressure on Sunday. After losing around 14 points in the morning session, the Nepal Stock... Read More...

KATHMANDU: Stocks remained mostly unchanged in the beginning trading hour of Sunday’s session. After a small dip in the Nepal... Read More...