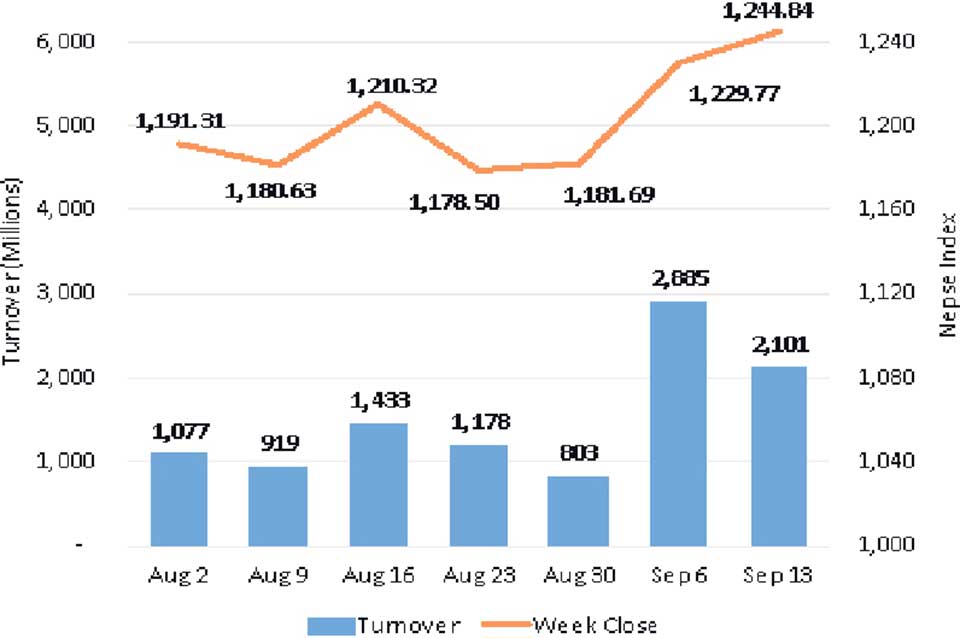 KATHMANDU, Sept 15: The sole stock market of the country came under pressure in the initial trading sessions of the week. On Sunday, the Nepal Stock Exchange (Nepse) index posted a loss of more than 10 points followed by a drop of over 8 points on Monday. However, the index staged a recovery mid-week by gaining over 6 points on Tuesday. Subsequently, Wednesday and Thursday witnessed a rise of over 13 and 14 points, respectively. Eventually, the index closed the week at 1,244.84 points, up 15.07 points or 1.23 percent from the previous week's close.

The stock market added substantial 48.08 points in the previous week with majority of the gains coming from heavyweight banks. As a result, the index suffered in the beginning of the week on the heels of profit booking by traders. However, the retracement was followed by a further surge as the index climbed above the previous week's close to close at a 12-week high of 1,244.84 points. The weekly turnover fell by 27.17 percent but the bourse still managed to register an above average total turnover of Rs 2,101 million.

On the earnings front, Taragaon Regency Hotels Ltd published its fourth quarterly financials of the fiscal year 17/18. The hotel has reported a net profit of Rs 257 million – a drop of 8.44 percent compared to that of corresponding quarter previous year. In other news, NIC Asia closed its issue of '11 percent NIC Asia Debenture 2082-83' on Wednesday. Out of the total issue worth Rs 1.83 billion, 20 percent was opened to public while the remaining 80 percent was allocated for private investors. The issue got oversubscribed in both aspects.

ARKS technical analysis indicates the index adding to its previous week's gains. Consequently, the index has closed higher for a third straight week. Technical indicators also favor bulls at present, supported by substantial turnover in the bourse. However, a small retracement can also be expected before the market can stretch to the short term resistance of 1,270 points.

This column is produced by ARKS Capital Advisors Ltd www.arkscapitaladvisors.com