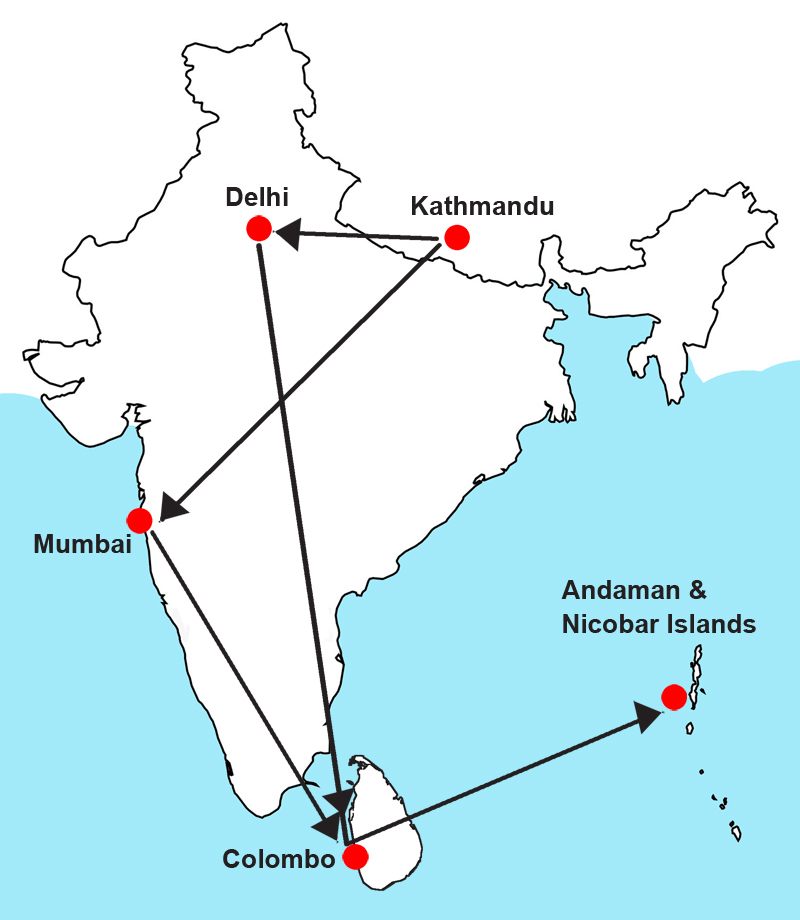 REPUBLICA, June 24: Human traffickers have been using the Andaman and Nicobar Islands in the Bay of Bengal as a new route for trafficking Nepali women abroad.

This came to light after the government was tipped off about 22 women stuck in Colombo, Sri Lanka in the first week of June. The government then sent a four-member fact-finding team representing the Ministry of Labor and Employment, Ministry of Women, Children and Social Welfare, Ministry of Foreign Affairs and the Nepal Police to Colombo. The they found that 14 of the women had already left Colombo by the time the team reached there.

“We could not do anything about the remaining eight women either as they had already acquired visas and were residing there legally,” a member of the team told Republica.

The team found that Nepali women have been using a Kathmandu-Delhi or Bombay-Colombo route to avoid criteria set by the government, according to Senior Superintendent of Police Sarbendra Khanal, who was one of the team members. The Nepali women go either to Bombay or Delhi  and continue on to Colombo where they spend a few days until their final destination and jobs are confirmed, according to him.

The team also learnt that traffickers are sending women by air or by sea, using Andaman and Nicobar as a transit point, Dilip Prasad Lamichhane, another team member, told republica. This was completely new information, he said, adding that they then realized international traffickers were involved in the use of this new route.

Uner an agreement between Nepal and India, Indian immigration authorities can stop Nepali migrant workers from going overseas if they fail to show a “no objection letter” issued by the Nepali embassy in New Delhi. So the traffickers have started using Colombo as an alternate route.

Lamichhane said that officials at the Ministry of Women and Children's Affairs in Sri Lanka provided information about the new route during informal conversations.

“The officials informed us that some women trafficked from Nepal take a direct air route to their destinations while some others are taken by traffickers via the Andaman and Nicobar Islands,” Lamichhane said.

The women using this route are suspected to be between 18 and 30 years of age on average, Lamichhane said.

The government has restricted Nepali women from going to Malaysia and the Gulf countries for employment since May 2014. Women have to be 24 years of age to work as housemaids in  the Gulf. So, impoverished young women who cannot find job opportunities in the country go abroad through informal channels, Lamichhane  said.

Nepali women are trafficked to work mostly as dancers, barmaids or housemaids, according to another member of the mission.

The team wemt  from Colombo to Malaysia and found thousands of Nepali girls working in dance bars, the team member said, adding that the Ministry of Labor and Employment has received more information from Gulf countries where Nepali girls are working as housemaids.

The fact-finding mission suspects the involvement of international traffickers from Nepal, India and Sri Lanka in finding new routes for trafficking Nepali women through Colombo and  Andaman and Nicobar.

Over 1,200 Nepali women have been flown to the Gulf countries through Colombo, according to informal estimates by Sri Lanka police and other government agencies, the fact-finding team member said. This number could be higher as the Sri Lankan authorities cannot keep formal records of women migrant workers who are sent to destination countries by sea route.

The government is working with the Sri Lankan government to crack down on  human traffickers, the member said.

The Andaman and Nicobar route is also used for trafficking male illegal migrants, it is leant.

Celebrating International Women’s Day on March 8 has now almost become a ritual. We talk about issues women have to... Read More...

CHANDRAUTA (Kapilvastu), Sept 3: Four women who were being trafficked to Turkistan were rescued from the Krishnanagar Check Point at... Read More...