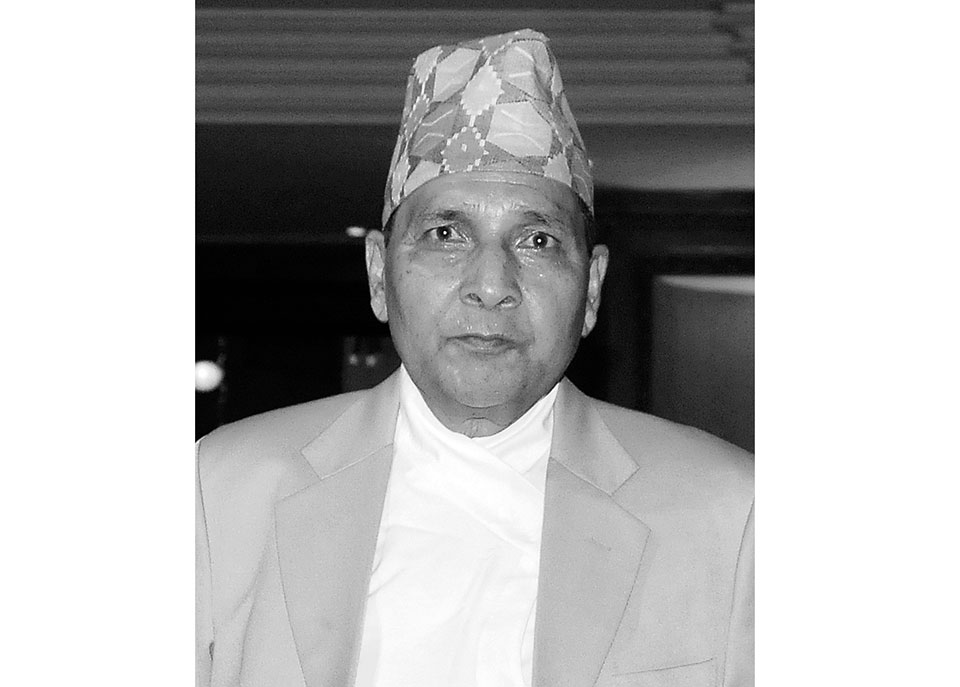 KATHMANDU, Oct 14: Nepal’s pioneer in promoting professional media and the founding Chairman of Nepal Republic Media (NRM), Hemraj Gyawali, passed away on Saturday evening. He was 79. Gyawali breathed his last while undergoing treatment at Shahid Gangalal National Heart Center where he had been taken to after complaining of chest pain. According to the medical team attending to him, he had a mild heart attack.

Gyawali, who remained active in the promotion of private media in Nepal, was the founding chairman of Nepal’s leading media house, Kantipur Publications, for over a decade before starting the NRM. Former senior bureaucrat Gyawali is a well-known figure in the fields of Nepali literature, culture, language and eastern philosophy.

While leading the country’s major media houses, he always advocated putting the people first and worked tirelessly to safeguard Nepal’s democracy. He did so by establishing two largest media houses following two popular political movements – Kantipur Publications after 1990’s political change and Nepal Republic Media after the political revolution of 2006. He always inspired journalists to cover issues of the general public and give them proper space in the media.

Editors who worked with him remember him as a publisher who never interfered with the editor’s freedom in the newsroom. Gyawali, according to them, always encouraged them to give enough space to opposition and minority voices.

Born on Chaitra 17, 1995 BS in Gulmi, Gyawali worked as a government official for 27 years and retired as a joint secretary.

Following the people’s movement and restoration of multiparty democracy in 1990, he played a crucial role in promoting professional journalism in Nepal. The Nepali media which was being run largely in a traditional manner was radically professionalized in terms of the quality of content as well as quantity following the establishment of Kantipur Publications.

Following the introduction of a federal republic system in the country in 2008, the NRM was established with Gyawali as its founding chairman with a vision of taking the Nepali media to a further new height. NRM which initially published Nagarik and Republica dailies along with their online editions now publishes the weekly tabloid Shukrabar, monthly magazine Paribar and runs Radio Nagarik.

Gyawali, who had a deep interest in Nepal’s society, culture, literature, language and eastern philosophy, was also active in the study and promotion of of the Sanskrit language. He was the chairman of Jayatu Sanskritum movement for four years. During his tenure, he took important initiatives for the promotion of Sanskrit including convening a national level conference.

Nepal’s noted media personalities respect him as the country’s pioneer in terms of professionalizing the media industry.

“He’s like a father to me,” said chairman and managing director of Kantipur Publications, Kailash Sirohiya, who worked for over a decade as the co-owner of the publications.

Gyawali is also remembered for his initiatives to revive the Sanskrit language in Nepal. He actively wrote articles for Nagarik Daily until a few weeks ago.

Yubaraj Ghimire, Editor, deschsanchar.com
He was the chairman of Kantipur Publications when I joined the media house as editor of Kantipur daily. I found him as a down-to-earth man. As an editor, I worked for three and a half years with him but never felt any sort of difficulties to work under his chairmanship.

As a publisher, he used to come to the newsroom but never intervened in editorial contents.

He had certain values while dealing with journalists - never intervene in news and views of the publication. Instead, he always supported the principle of giving space to opposition views. It was nice working with him. I never sensed any kind of ego or pride while working with him.

Prateek Pradhan, former Editor-in-Chief, Nagarik Daily
I remember Hemraj Gyawali as a pioneer publisher in broadsheet media in Nepal. That was a revolutionary move at the time because nobody was coming into broadsheet, it was very expensive and the market was untested.

Because of his magnanimous personality, his experience, his commitment and hard work, Kantipur at the time became the most successful media outlet in Nepal. And then later on, when he moved to Nagarik Daily, that also secured credibility and popularity because of his name.

He was a very supportive publisher in the sense that he always supported press freedom and always gave full rights to the editor.

During his tenure as publisher, I worked as an editor and we never had any kind of dispute on any issue.

He always listened to the editors, and let the journalists to do whatever they had to do professionally. I remember him as a very very good publisher. His passing is a big loss for journalism in this country.

Akhilesh Upadhyay, former Editor-in-Chief, The Kathmandu Post
My association with my former Chairman Hemraj Gyawali goes a long long way back, almost 20 years. He was a good man, very soft, and he always listened to the problems. He had a great commitment to cultural issues. He knew why and how they should be covered.

He used to worry that the new generation may not be quite in tune with our cultural landscape. Hence, he saw his responsibility as publisher was to keep them on track. So, he used to insist that these important issues are covered well. Irrespective of his generation, he was open for new changes in the media as well.

Raghu Panta, NCP leader, former minister
Hemraj Gyawali played an important role in promoting professional journalism. He was an intellectual so he used to spend most of his time reading books and writing articles. His demise is an irreparable loss to Nepali journalism and literature.

Basically, his initial struggle to establish private media organization and developing journalism will be remembered forever. I fondly recall talking with him often. I also used to enjoy reading his poems and articles.

Homraj Dahal, Nepali Congress leader, former minister
He played an important role to institutionalize professional journalism. His contribution toward promoting media is really remarkable. I hope the younger generation will also follow his path in the coming days.

Nawaraj Kattel, Jayatu Sanskritam, general secretary
Hemraj Gyawali was equally active in Jayatu Saskritam, the organization established for promoting the Sanskrit language. In 2004, he joined the organization as its treasurer. He took the charge of the organization in the capacity of its head after Shree Bhadra Sharma passed away. During his four years tenure at the organization, he greatly helped to increase the revolving fund and organize a Sanskrit conference.

Kishor Nepal, former Editor-in-Chief, Nagarik
He played an important role in developing the ignored Surkhet as a livable city. When he was the chief district officer of Surkhet, Gyawali established an airport in the district. This increased the direct access to Surkhet from Nepalgunj and Kathmandu for civil servants.

Also, he worked hard to press for privatization policy while he was working as a joint-secretary at the Ministry of Finance. Some blamed Gyawali of being loyal to the royal palace but he was fully committed to bureaucracy.

As a publisher, he never intervened in editorial contents. Instead, he used to keep writing articles. So, many people respect him. In another words, he became a guardian of Nepali journalism.

KATHMANDU, May 18: An act of physical assault against health professionals or employees over issues related to medical treatment is... Read More...

KASKI, May 17: The CPN-UML candidates for both posts of chairperson and vice-chairperson have won the elections in Annapurna Rural... Read More...

Jazeera Airways announces launch of service to GBIA
38 minutes ago