Nepal will play for a win against Lebanon: Shakya 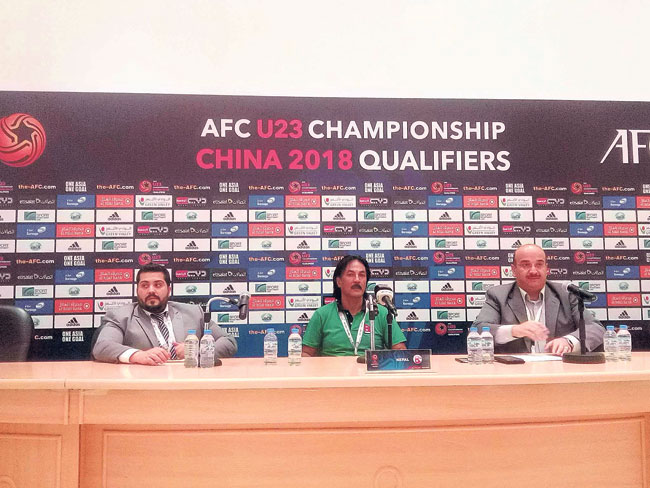 KATHMANDU, July 18: Nepal U-23 football team is already out of the race to qualify for the final round of AFC U-23 Championship 2018 to be held in China.

After suffering two straight defeats in Group D of the qualifiers against the United Arab Emirates (UAE) and Uzbekistan respectively, Nepal's aim for now is to return home with a point.

And head coach Raju Kaji Shakya says that his team is ready to accomplish the target of gaining a point beating Lebanon in the last group match at Tahnoun bin Mohammed Stadium, Al Ain.

“Lebanon is obviously stronger than us, but we will play for a win and hopefully we will go home with at least a point,” said head coach Shakya, talking to Republica from the UAE.
In Group D, the home team UAE which has accumulated six points from two matches is on top of the table on the basis of superior goal difference to Uzbekistan which also has equal number of points. Nepal, which has conceded seven goals in two matches, is at the button of the table below Lebanon which has conceded three goals less.

The group winner qualifies for the final round and the match between the top two teams on Wednesday will decide the winner.

The outcome against the UAE was a result of Nepali defenders making too many mistakes. However the youth team improved defensive performance against Uzbekistan to concede lesser goals.

“Our performance against Uzbek side was improved one than the opening match, the changes we made in defense and midfield helped us to concede fewer goals,” added Shakya.

After the match against Nepal on Tuesday, Uzbekistan head coach Ravshan Khaydarov also praised the Nepali defense. “After the first match when Nepal conceded five goals, they prepared very well against us and defensively they were very good,” Khaydarov said.

However Shakya said that the defensive part of his team still needs to improve to produce a win against Lebanon which lost the matches against Uzbekistan and the UAE with the scorelines of 3-1 and 1-0 respectively. “The first goal we conceded against Uzbekistan was due to our poor marking. In the second goal as well, players should have done well,” further added Shakya. “We will have to be careful and stay defensively compact.”

Anjan Bista, who has been playing as the second striker behind skipper Bimal Gharti Magar in 4-5-1 system won't be available against Lebanon as he conceded yellow cards in a row in the last two matches. Shakya said that he is yet to decide about Anjan's replacement but added there could be more than one change in the team that played against Uzbekistan.

“We have been failing to hold the ball possession and we have been slow in attack throughout this tournament. Our plan is to improve in those parts when we take on Lebanon,” Shakya shared his plan.

However, Shakya said that there won't be any change in the playing style despite the changes in the team. Bimal Gharti Magar who didn't play full 90 minutes on Monday is fresh to start against Lebanon. “He seemed tired so I brought him a bit early in that match but he is ready to start on Wednesday,” informed Shakya.

Nepal to play friendly against India

KATHMANDU, May 17: Nepal's national football team is set to play a friendly match against India on June 6 in Mumbai.... Read More...