KATHMANDU, March 10: Nepal is taking on Kenya in the ICC World Cricket League on Saturday and Monday at the TU Cricket Ground. Republica looks into some crucial issues for Nepal regarding the Saturday's match.

Kathmandu witnessed sudden change in weather on Friday and the day remained partly cloudy with drizzle. The Meteorological Forecasting Division has said the weather conditions on Saturday would remain similar to that of Friday.

However, Nepali team's Technical Analyst Raman Shiwakoti opined that the match will take place unless and until there would be more adverse weather conditions on Saturday than Friday. "If the weather remains similar to today, there will be the match even by reducing some overs of the match. In such case, Duckworth-Lewis Method also could be applied," said Shiwakoti.

If the rain washes out the Saturday's match, the match would takes place on Sunday.

Nepali team skipper Paras Khadka, who recently went through a surgery of appendicitis, has joined the team after it returned from the practice tour to India. However, there is still doubt whether Khadka will play on Saturday's match. "In last three days, I'm improving a lot. However, more than my fitness how team approaches the match is crucial for us," said Khadka.

Coach Jagat Tamata said that the team will decide only on Saturday morning whether Khadka will play or not. However, the team management informed that Nepali pace bowler Karan KC will not play the Saturday's match because of health concerns. Tamata also claimed that there is no fitness concerns regarding rest of the players.

Home crowd has been biggest strength of Nepali team while playing at the TU Ground. The crowd could play a crucial role in Saturday's match also.

Opening pair in Nepali batting line up had been a concern since long. Coaches had tried several options in the past. This time coach Tamata is more likely to pick technically sound batsman Gyanendra Malla and debutant Sunil Dhamala for opening the Nepali innings.

If the opening pair becomes able to give a momentum to the team, Nepal could excel in batting with its experienced middle order.

History doesn't help any team to win the match but sometimes it comes into play at psychological level.

Nepal is a team that played World T20 once whereas Kenya was a superpower among associate nations of the ICC as it had played five consecutive World Cups from 1996 to 2011. Kenya had also reached semifinals of the World Cup cricket 2003.

Looking into the head-to-head records in 50-over matches, Kenya has superiority over Nepal. The two teams had clashed twice in January 2015 during the ICC World Cricket League Division 2 and Nepal had suffered loses on both the occasions. 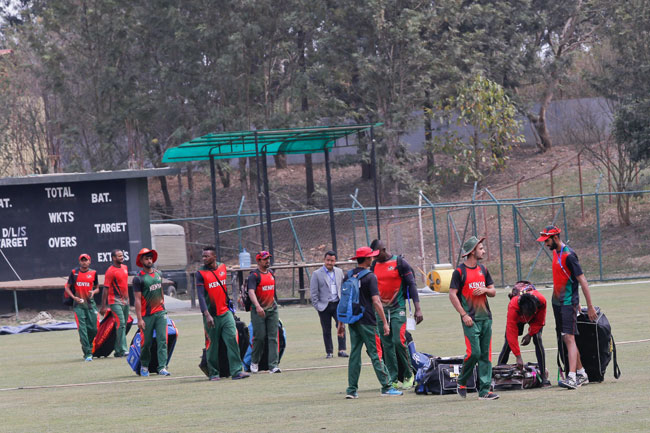