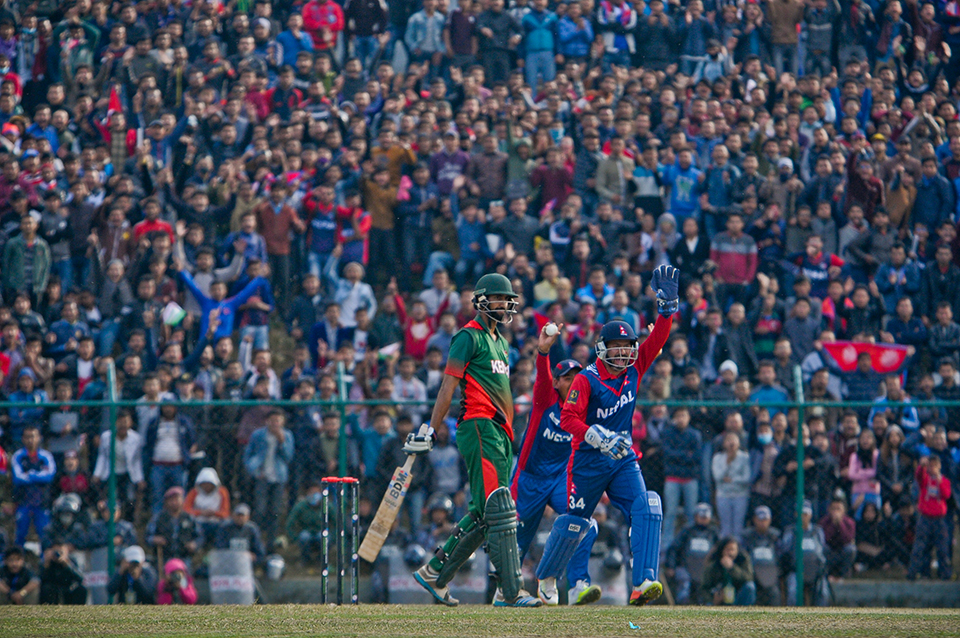 KATHMANDU, March 13: A crucial third wicket partnership of 111 runs between stand-in skipper Gyanendra Malla and Dipendra Singh Airee, and four-wicket haul by Sharad Vesawkar  gave Nepal a much-needed victory in the ICC World Cricket League Championship as it registered a convincing seven-wicket win over visiting Kenya on Monday at the TU grounds, Kirtipur.

Opener Gyanendra (64 not out) and teenager Dipendra (62 runs) shared a 111-run partnership for the third wicket as Nepal made 160 runs in 30.2 overs in its run chase to surpass the target of 156 runs with seven wickets in hand. Nepal was tottering at 14/2 in 3.4 over but the duo stretched the score to 125/3 before Dipendra was sent back to the pavilion in the 27.2 over.

Earlier, part-time spinner Sharad shone with the ball claiming four wickets as Nepal bowled out the East African side for 155 runs in 46.1 overs after inviting the visitor to bat first in front of the jam-packed home crowd.

On Saturday, Nepal had faced a five-wicket defeat against the same opponent in a match interrupted by the rain thrice.

Following Monday's win, Nepal remained stable in the sixth position with eight points from 10 matches, two points behind fifth-placed Kenya. The top four finishers in the eight-team contest being played in double round robin format will book automatic berths for the 2019 World Cup Qualifiers.

The outcome has kept alive Nepal's mathematical hopes of entry into the qualifiers. However, Nepal needs to get winning results in the remaining four matches against Hong Kong and the UAE and also wait for favorable outcome from other opponents.

“We still have mathematical chances for qualification and we need to play better cricket for that,” Nepal's coach Jagat Tamata said. “Every department -- bowling, fielding and batting was at its best today. We came up with improved show than on Saturday.”

“Gyanendra came up with superb show and played long innings after a big gap. He proved his worth. Dipendra was also superb and he has proved he could be a pillar in our middle order,” Tamata added.

In the absence of regular skipper Paras Khadka, who is currently recuperating from appendicitis surgery, stand-in skipper Gyanendra played a patient knock to record Nepal's first win over Kenya in fourth encounter of 50-over format. He hit eight fences and a six off 93 deliveries.

Eighteen-year-old Dipendra, who came at number four after Nepal lost two early wickets, cracked eight fours and a six after he was caught by Gondaria off Obuya's delivery in the 27.2 over. Sharad quickfired 24 runs facing 11 balls. He hit four boundaries including a boundary in the first ball of the 31st over and a six in the following ball which became sufficient for Nepal to surpass the target.

“I am happy for the win and support from the spectators. I had thought we could win if we save wickets. I hit fours in order to release pressure,” said Dipendra, who was playing his second match for the national team after marking his debut against same team on Saturday.

Opener Sunil Dhamala (1) and Sagar Pun (5) were out cheaply.

“In all, we came up with great teamwork. We were good with ball and Dipendra was at his best. We called in the team because of his potential,” said Gyanendra. “We were defeated in the first match due to small mistakes and we amended it today.” Speaking about his innings, he said, “I was determined to play long innings today because of late I had been out for just 20/30 runs. I was determined to play long innings once I got settled with the bat.”

Earlier, Mehboob Alam, who made comeback in the team after 2015, proved his worth taking first two wickets. He removed Kenya opener Alex Obanda (9) and Dhiren Gondaria (0) in the fourth over with just 14 runs on board.  He gave away 11 runs in his seven-over spell with five maiden overs.

However, the other opener Irfan Karim (38 off 77) and Collins Obuya (48 off 78) consolidated the innings with 79-run partnership for the third wicket before the latter was stumped by wicket keeper Binod Bhandari as Kenya made 93/3.

“Breaking the big partnership was a key moment of the match,” Nepal's captain Gyanendra Malla said.

“We lost two early wickets, there was no meaningful partnership besides one,” Kenya coach Thomos Odoyo said. “We kept on losing wickets. Batting was below par. They played better than us. The toss is very important in this wicket.”

He was also full of praise for the home spectators. “The crowd is amazing. We don't expect it in associate nations. We hardly get 500 people (in Kenya). It normally pushes home team. They are lucky to get such crowd,” he summed up.

Following Collins' wicket, Kenya lost wickets in regular interval and Karim, the second highest scorer was sent back to the pavilion as well. He was caught by Sagar Pun off Sharad. Skipper Rakep Patel (21 runs), Karan Kaul (14 runs) and Nehemiah Odhiambo (unbeaten 15 runs) were the other remarkable contributors for Kenya.

Kenya lost last four wickets scoring just two runs. Sharad pocketed three out of four wickets. He gave away 28 runs in his 7.1-over bowling spell. Basant Regmi pocketed two wickets in his eight-over spell giving away 24 runs with a maiden over. Sandip Lamichhane grabbed one.

Nepse inches up 2.16 points as daily turnover soars to Rs 1.56 billion on Sunday
8 hours ago

Govt to do all it can to boost security personnel’s morale: Home minister
9 hours ago