Nepal targeting yet another SAFF final with attacking display 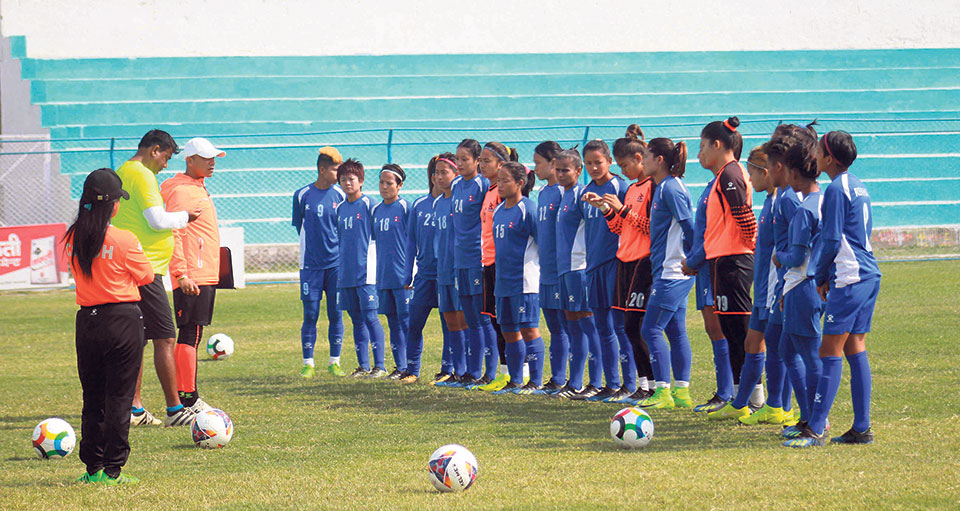 KATHMANDU, March 20: When Nepal takes on Sri Lanka in the first semifinal of the SAFF Women’s Championship on Wednesday, the team will be looking to reach the final of the tournament with attacking football.

Nepal, targeting its fourth final in the fifth edition of the tournament, will leave no stones unturned to comfortably seal a final place by overcoming a defensive Sri Lanka side, who, head coach Hari Khadka believes, does not have a single individually talented players who can cause problems to the Nepali defense.

"We look stronger than Sri Lanka so far in this tournament. Well, we should never underestimate an opponent, but we are technically better," Khadka claimed.

His statement comes after the completion of the group stages with Nepal being only the second team of the tournament who is yet to concede a single goal. However, India, who will be facing Group A runner-up Bangladesh defeated by Nepal, has scored 11 goals in two games, while Nepal has scored six goals in the same number of games.

With Nepal in a good form heading into the semifinals, Sri Lanka managed to win only one as it defeated Maldives 2-0 in its first Group B match and has also conceded five goals from India.

Talking about its proper preparation for the semifinal, Khadka added that the team will play with the tactics it has successfully trained with overcoming its past mistakes.

"We will play our game with the tactics we have trained with throughout the tournament. We will use our technical aspects to rectify our previous mistakes," Khadka further added, "We will reach the final defeating Sri Lanka."

Nepal has been unable to win the tournament despite reaching the final for three times. It lost all its final matches against India.

When asked about what the team targets from the tournament, Khadka said that the team will target the semifinal first to defeat Sri Lanka and then to reach the final regardless of the other team to play for the summit clash between India and Bangladesh.

"We have first targeted to win the semifinal and reach the final. We have not thought about who we will be facing as we have been presenting ourselves as the title contender," Khadka said, adding, "Sri Lanka is more of a defensive side and they look for counter attacks. We will be playing attacking football to break their defense."

Nepal has been thorough on goals as four of its six goals in the tournament have come from braces from Sabitra Bhandari and Manjali Kumari Yonjan.

Bangladesh head coach Golam Rabbani Choton recently claimed that Bhandari is the best South Asia player at the moment after her terrific display against the team when she scored a goal and assisted one.

Bhandari will be looking to add more goals to her tally from the game, while Nepal will be trying to absorb Sri Lanka’s Chalani Kumari Ekanayake, who also has two goals to her name in the competition.

Khadka added that the team will not only play attacking football, but will also present a resilient-defensive performance by not conceding a goal.

"We are targeting a clean sheet along with our attacking tactics. We will attack most of the times, but we want a clean sheet as well," he added, "Sri Lanka does not have individual players who can beat our defenders. All we need to do is be cautious in their counter attacks."

He added that his team has technically-gifted attacking players who can damage Sri Lanka’s defense and change the face of the game.

I voted for democracy in America
17 hours ago

How long can I expect a COVID-19 illness to last?
16 hours ago