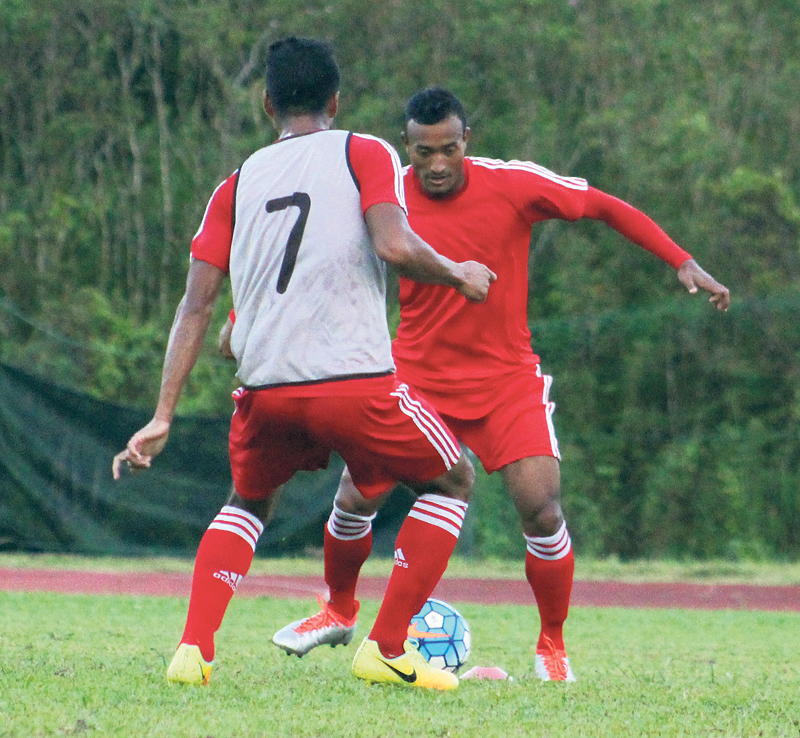 KATHMANDU, Nov 15: With just a step away from making history of winning the first ever Asian football title, Nepal faces Macau in the final of the AFC Solidarity Cup on Tuesday. After lifting the SAG and Bangabandhu Cup earlier this year, Nepal is playing its third final of the year and first ever Asian final in its history.


The coach, however, was cautious about the physical superiority of its opponents.
“I don't think it will be easy to beat them. But we still have chance to win. Striker Nicholas Mario Tarrao is the most important player of Macau. He is tall and dangerous player. If the defenders play well then we have a chance,” said Koji, referring to the threat from Tarrao, who is also the highest scorer of the tournament with four goals in his name.
Looking at the past encounters, Nepal holds a better record over Macau.

In the five matches between the two sides, Nepal has won thrice, lost once and the other match was drawn. The last time these two sides met was during the AFC Challenge Cup match in 2008 which saw Nepal record a 3-2 win. Nepal sits 186th in FIFA ranking, 10th position above Macau and has scored 16 goals against its final opponent while conceding seven goals.

Macau, however, is the highest scoring team in the ongoing tournament with eight goals. Contrary to it, Nepal has conceded the lowest two goals in the tournament.

Koji's counterpart Tam Lao San hasn't felt the heat of the final as his side has already met its target of reaching the semifinal. “As we play amateur football in Macau, we had never reached the semifinal before. So our first target was to reach the semifinal. We did it and winning the semifinal came just as a bonus for us,” said San.

Tagging Nepal as a stronger opponent, he has suggested his side to play without any pressure. “In general, Nepal is a strong and balanced team. But it does not mean we are not good. As both teams are set to play the final, both want to lift the trophy. So I have asked my players not to take too much pressure,” added San.

En route to the final, Nepal played a 0-0 draw against Timor Leste and eased past second-string Brunei 3-0 to top Group A and qualify for the semifinals. In the semifinal match, Nepal overcame Laos 3-0 in penalties after a 2-2 draw in regulation and added time.

Given the withdrawal of Pakistan at the last moment, Group A had only three teams unlike Group B with four. Macau started its campaign with a 2-1 win over Mongolia in the newly launched tournament that came as replacement of the AFC Challenge Cup, which was scrapped last year. Macau defeated Laos 4-1 and settled for 1-1 draw against Sri Lanka to qualify as group winner. In the semifinal, Macau edged past Brunei 4-3 on penalties after the match ended in a 1-1 draw.

Head coach Koji is likely to field the same starting lineup that he used in the semifinal against Laos during the final clash against Macau. He is likely to continue Bharat Khawas and Nawayug Shrestha upfront while Bimal Gharti Magar, who notched a goal in the last match, could play the role of an attacking midfielder. Kiran Kumar Limbu will take the charge of the post. Koji is also likely to continue the back four of Biraj Maharjan, Rabin Shrestha, Ananta Tamang and Aditya Chaudhary wich has been good so far in the tournament despite conceding two goals against Laos.

Nepal's head coach Koji is also hopeful that winning the Solidarity Cup will spur the authorities in Nepal to rebuild football infrastructures destroyed by the earthquake.
“Last year, there was a big earthquake and the national stadium was damaged.  So we can't organize games in Nepal, which are important for football's future in Nepal,” added Koji.