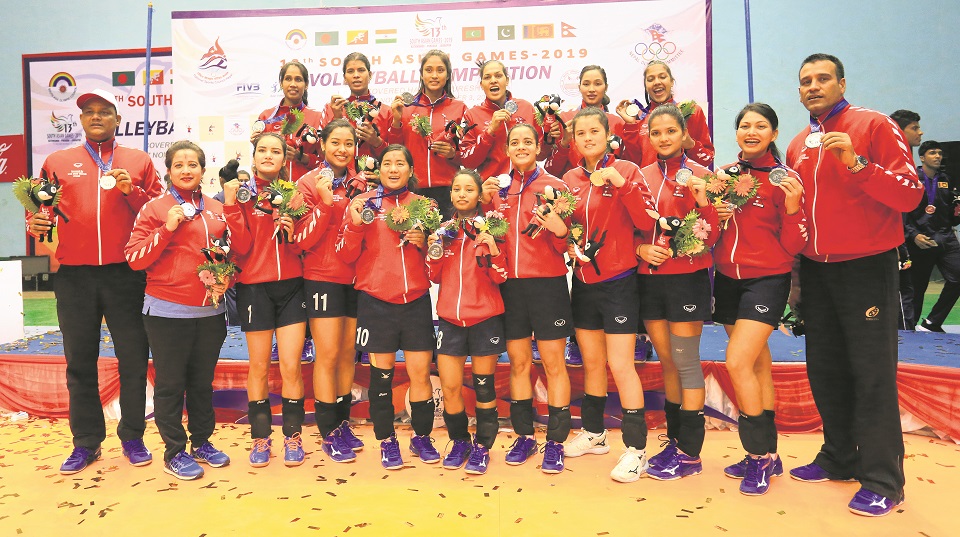 Members of Nepal national women’s volleyball team pose for a group photo after winning the silver medal during the 13th South Asian Games at the NSC’s covered hall in Tripureshwar, Kathmandu on Tuesday. Dipesh Shrestha/Republica

KATHMANDU, Dec 4: Nepal suffered an agonizing 3-2 set loss at the hands of India leaving the host’s dream of winning the gold in women’s volleyball unfulfilled at the 13th South Asian Games (SAG)

In the final match of the National Sports Council (NSC)’s covered hall at Tripureshwar on Tuesday, despite taking the lead after going down 1-0, Nepal could not present a strong challenge in the last two sets and lost the game 3-2. With that, Nepal's wish of winning the gold medal in women’s volleyball couldn't materialize.

However, Nepal bettered its group stage defeat at the hands of India when it lost in straight sets 3-0. Nepal lost the first set 25-17, but made a solid comeback in the second and the third to keep India under pressure. Nepal registered an exciting 25-23 second set win, followed by a 25-20 third set victory to take a 2-1 lead against the champion.

However, after that, it could not continue the same rhythm in the fourth set. Even though the set became competitive with Nepal registering back to back points, the Nepali team’s
receiving was below par and the spike could not help the cause and lost points.

India presented a good performance in the sets and was successful in holding the Nepali challenge. Winning the fourth set 25-20, India drew the game 2-2.

India confirmed its gold in women’s volleyball after getting a comfortable 15-6 win in the final set.

Despite presenting a tough challenge against the title favorite, Nepal was limited to a silver medal, which also happens to be the first silver in volleyball.

Likewise, India has won the gold medal in men’s volleyball as well after it defeated Pakistan 3-1 earlier on the day.

Despite taking the first set lead 20-25, Pakistan could not hold on longer and lost all the remaining sets. India beat Pakistan 25-15 in the second set, 25-17 in the third and confirmed its gold medal with a stunning 29-27 fourth set win.

Emotions hit hard
Nepali women’s volleyball team had nearly reached the last stage to win the gold in a cold weather at the covered hall. There were tears in the eyes of all the players having missed a golden opportunity to win the gold medal. The spectators were left stunned seeing the players in that state.

Some praised the players for playing better than they did in the first game against India, while some criticized for not performing on par with the previous sets. It was naturally difficult for the players to not have secured the title after coming so close to winning it--that too, when the game was being organized at home.

Captain Aruna Shahi, who was in the thick of things when the team won the Asian Volleyball Confederation (AVC) Central Zone Volleyball Championship in Bangladesh, was unfortunate to win the title in the home court.

IPO of CEDB Hydropower allotted, lucky 234,195 investors get 10 units each
20 hours ago

What next: Midterm elections or a full-term Oli govt?
13 hours ago

How long does protection from COVID-19 vaccines last?
23 hours ago

India reports daily rise in coronavirus cases of 343,144
23 hours ago