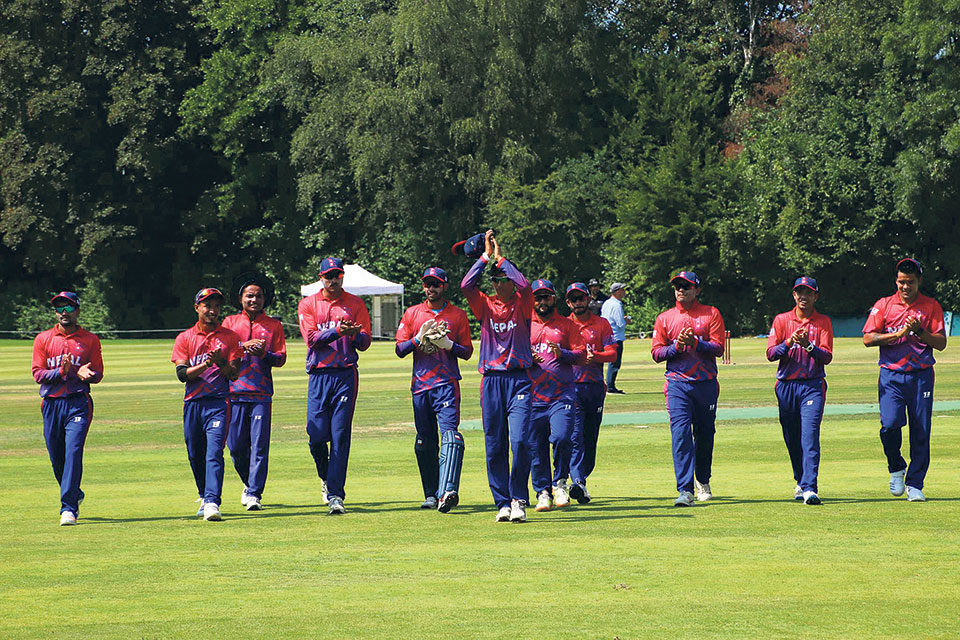 Players of Nepal applaud the fans at the end of the first innings during their one-day international cricket match against the Netherlands in Amstelveen, the Netherlands on Wednesday. Photo Courtesy: Raman Shiwakoti

KATHMANDU, Aug 1: Nepal suffered a disappointing 55-run defeat at the hands of the Netherlands in its first ever ODI cricket match in Amstelveen on Wednesday.

The Netherlands, who won the toss and elected to bat first, presented a target of 190 runs after losing all its wickets in 47.4 overs. In reply, Nepal failed to chase the target getting all out on 134 in 41.5 overs.

Michael Rippon was the standout player for the home team as he scored a half century, hitting 51 runs off 76 balls including two fours. Bas de Leede was the other big hitter for the Netherlands as he scored 30 runs off 60 deliveries which included a four and a six, while the opening batsman Stephan Myburgh added 29 runs off 32 balls with a six and four boundaries to the Netherlands’ total before he was bowled by Nepali teen sensation Sandeep Lamichhane.

All the other batsmen failed to even reach the double figure as skipper Pieter Seelaar scored five, Paul van Meekeren was not out on three, the other opener Daniel ter Braak hit one, and Shane Snater was sent back to the pavilion on duck after he was bowled out by captain Khadka.

Khadka was the pick of the Nepali bowlers as he claimed four wickets giving away 26 runs in the 10 overs he bowled. He had an economy of 2.60 letting two fours and one six. Likewise, Sompal Kami took three wickets giving away 34 runs in 8.4 overs which also consisted of a maiden over, while Karan KC, Lamichhane and Basant Regmi pocketed a wicket each for Nepal.

In reply, only four batsmen were successful to take their tallies to double figures for Nepal as the other four batsmen failed to even score a single run.

Vice-captain and opener Gyanendra Malla scored a half century hitting 51 runs off 61 deliveries including eight boundaries. He was supported by Dipendra Singh Airee, who scored 33 runs off 48 balls with a six and two fours.

Likewise, the other opener and wicket-keeper batsman Anil Sah hit 21 runs off 32 deliveries which comprised of three fours, while captain Khadka could not match his incredible bowling performance with his bat as he was caught out by Rippon after he scored 12 runs off 21 balls with a four.

Veteran bowler Shakti Gauchan scored not out nine runs off 44 balls, while Sarad Veswakar hit four runs off 15 balls coming down the order. Lamichhane managed to add a run to the Nepali total.

Aarif Sheikh, Kami, Regmi and KC were all out for ducks which saw Nepal struggling on 104-6 after losing Airee, who showed some signs of recovery. But, after Airee was out, the wickets kept falling and the score was 123-9 at the end of 36.3 overs.

Klaassen, Rippon and Seelaar led the bowling attack for the Netherlands as they shared nine wickets between them. However, the pick of the bowlers was Rippon who took three wickets giving away 23 runs in 10 overs with three maiden overs and 46 dot balls. He also had an economy of 2.30, slightly better than Khadka’s.

Likewise, Seelaar was superb in bowling as well, as he picked up three wickets giving away 20 runs in nine overs including a maiden over and an economy of 2.22, the best by any bowler in the match who bowled more than two overs, while Klaassen also pocketed three wickets giving away 30 runs in 10 overs including a maiden. Also, Leede took a wicket giving away three runs in 1.5 overs. Rippon was named the man-of-the-match after his commanding all round performance.

Nepal will be looking to rectify the errors in its second ODI match against the Netherlands which will be played on Friday.