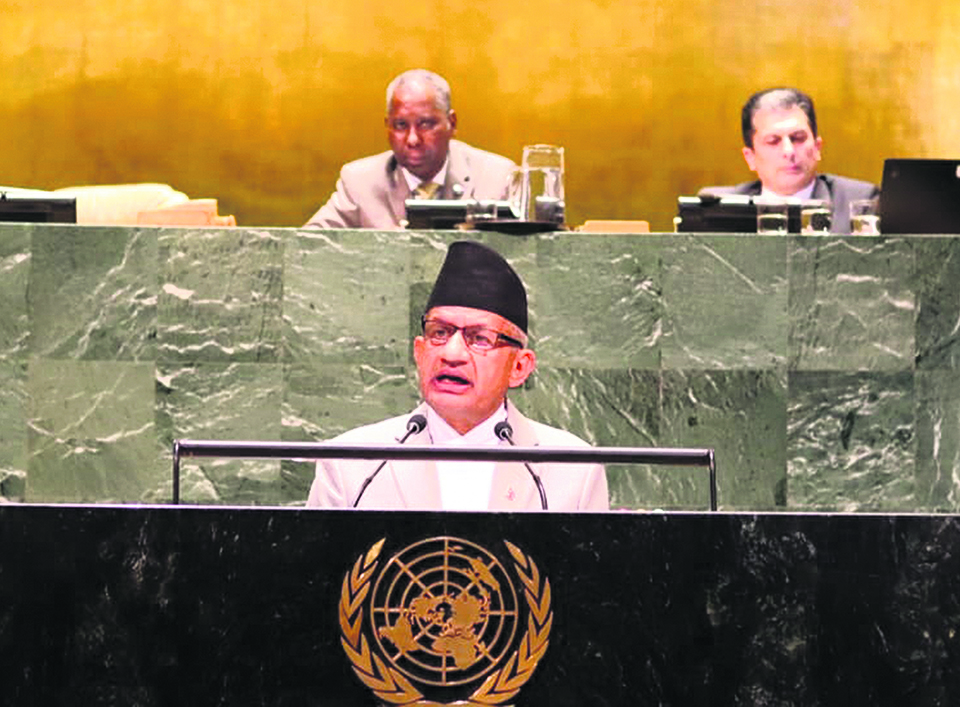 NEW YORK, Sept 29: Minister for Foreign Affairs Pradeep Gyawali has placed emphasis on regional economic cooperation through SAARC, BIMSTEC and the Asia Cooperation Dialogue (ACD) among other platforms , while addressing the 74th session of the United Nations General Assembly.

Without mentioning the context of India and Pakistan, Minister Gyawali said regional cooperation would help  global efforts for peace,  security and economic development.

“Nepal believes that regional processes complement global efforts for peace, security and economic development. We strive to enhance regional economic cooperation under SAARC, BIMSTEC and ACD. As the current chair, we are effortful to revitalize the stalled SAARC process,” said Gyawali at the UNGA.

Nepal has been stressing the reactivation of the South Asian Association for Regional Cooperation (SAARC) amid the souring relations between  two member states India and Pakistan over the Kashmir issue.

Gyawali informed the UNGA that Nepal is fully committed to concluding the remaining tasks of the transitional justice process.

“We are fully committed to concluding the transitional justice process in line with the Comprehensive Peace Accord, the directive of the Supreme Court, relevant international commitments, the concerns of the victims and the ground realities,” he said.

Gyawali was of the view that Nepal’s democratic transformation presents a uniquely successful, nationally-led and owned peace process that will be useful for other  countries in conflict also.
Highlighting the government’s initiatives for bringing foreign investment into the country, he said Nepal has created an investment-friendly atmosphere with substantive policy and legal reforms and provided a one-window service for foreign investment.

“Building on the historic political transformation, the government of Nepal is now focused on the economic agenda to sustain the political gains under an overarching national aspiration of ‘Prosperous Nepal, Happy Nepali’,” he added.

Gyawali underlined the need of multilateralism to achieve the SDG goals. “Nepal pins  great hope on the centrality of the UN for galvanizing multilateral efforts to address the cross-cutting and global challenges, such as poverty reduction and achieving SDGs,” he said.

Drawing attention to climate change in mountainous countries, Gyawali said the poorest and most vulnerable countries were hit hardest by the impacts of climate change. “Despite their negligible emissions, they face the consequences which are disproportionate, unjust and undue,” he added.  “Home to Mount Everest, the highest peak in the world, Nepal lies at the hot spot of climate change. The Himalayas, as the barometer of climate change, are witnessing the melting of glaciers and drying up of  fresh water.”

He informed the international community about the government’s decision to convene a global dialogue in April next year under the theme of climate change.

‘Govt’s commitments to TJ at international forums just a formality’

PM may skip UNGA for 'lack of any new issue'

KATHMANDU, Aug 4: Prime Minister K P Oli has not missed any international forum ever since his ascent to power in... Read More...

Amid COVID-19 fears, MoHP all set to begin RDT and PCR in Kailali, Kanchanpur and Baglung
3 hours ago

One after another, Oli's key aides court controversy
15 hours ago