‘Nepal’s Switzerland’ in the making 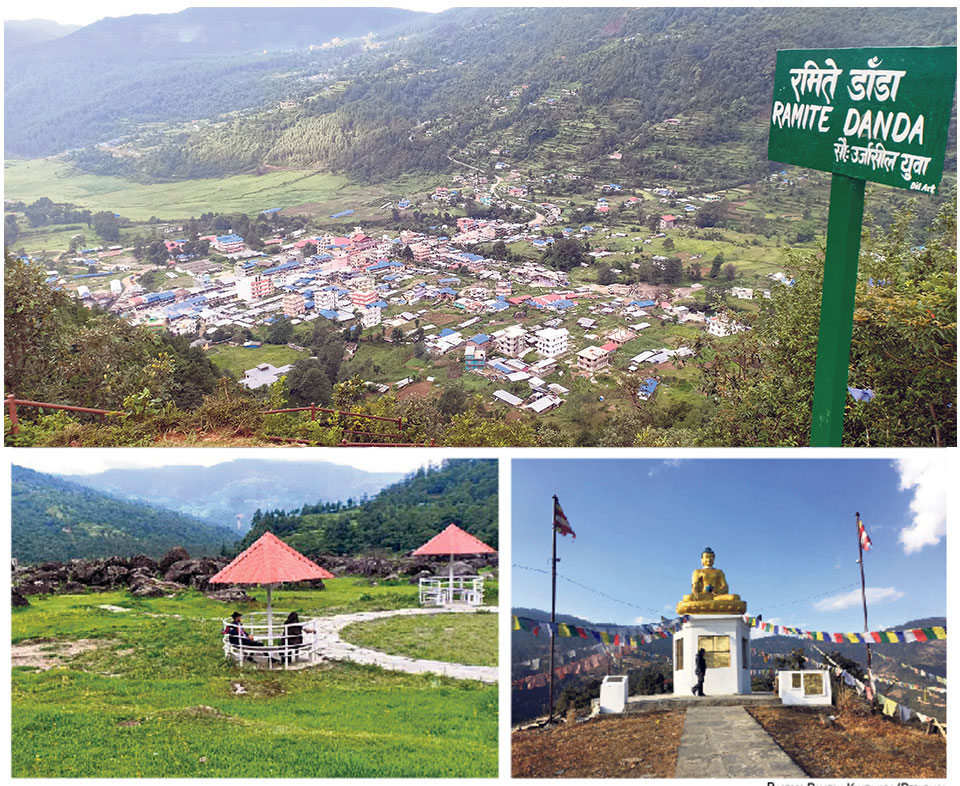 A view of Jiri from the newly-built Toni Hagen Ecological Park (top), visitors are seen in another newly-built Stone Park (above left) and the Buddha Park in Jiri Municipality in these recent pictures. Photos: Ramesh Khatiwada/Republica

DOLAKHA, June 30: In their policies, the local, provincial, as well as the federal government, have prioritized tourism. But an actionable strategy and plan to achieve the goal remains elusive for most of the local and provincial governments except in the case of Dolakha district. Due to its focus on building infrastructure to support its ambition to grow the local hospitality industry, locals say that the district is validating titles given to it:  Nepal’s Switzerland and gateway to Mount Everest.

“We are building all these infrastructures as part of our broader strategy to develop Jiri as Nepal’s Switzerland. We have huge tourism potentials. The only thing that we need to do for harnessing its full potential is to channelize our energy and resources strategically,” said the Mayor of the municipality, Tanka Jirel. “We are working in full swing, and people have now started to notice the results.”

The municipality is building eight big parks, and it claims that once completed these parks will be a huge pull factor for tourists. Along with that, it is also preparing a detail project report (DPR) for constructing an artificial lake with an area of two square kilometers.

“The big parks are situated near the entrance of the municipality. Construction of Buddha Park is now in the final stage. Construction of other parks is also moving ahead in full swing,” he said.

Lincoln Market is very famous in Jiri. Mayor Jirel stated that a park in the memory of late Toni Hagen, a Swiss geologist, and pioneer of Swiss development assistance in Nepal, is also being constructed.

“An ecological park in the memory of Tony Hagen is being constructed at Ramite Danda. From this park, tourists can view the Lincoln Market and the Jiri valley. Its scenic beauty is mesmerizing,” he said. “A huge Nepali flag at the ecological park gives a different type of feeling. It gives a sense of thrill and awe, looking at this flag in that park.”

Another remarkable park in the making is Tenzing – Hillary Memorial Park. It is being constructed at the place where the duo stayed overnight in Jiri on their way to summit Mount Everest and eventually became the first known individuals to reach its summit.

The municipality is also building Haleshwar Park at Mali, and Stone Park at Shyama. Both of these parks carry archeological and cultural values. “These parks are home to beautiful and precious stones and we are preserving them for our future generations,” Mayor Jirel said.

Along with that, Bauddha Stupa at the Budhha Park is one of the major attractions for visitors. The tall Buddha’s statue installed at this park gives a sense of peace and calm to the visitors. “The park is being constructed with financial assistance from Taiwanese religious gurus. Along with Baudhha stupa, there will be a stupa of Guru Padma Sambhav at this park,” Mayor Jirel informed.

Stating that the new generation of Nepalis is increasingly taking interest in touring, Jirel said that it is essential to build infrastructures and attractions for such internal tourists.

“Unlike in the past, Nepalis today love traveling to various places inside and outside the country with their family and friends. To attract these domestic tourists, we should invest in infrastructures and offer packages that respond to their needs and preferences,” he said.

Dolakha Film City to be showcased in investment summit

DOLAKHA, March 14: Dolakha Film City has been included among the list of projects to be showcased in the investment... Read More...