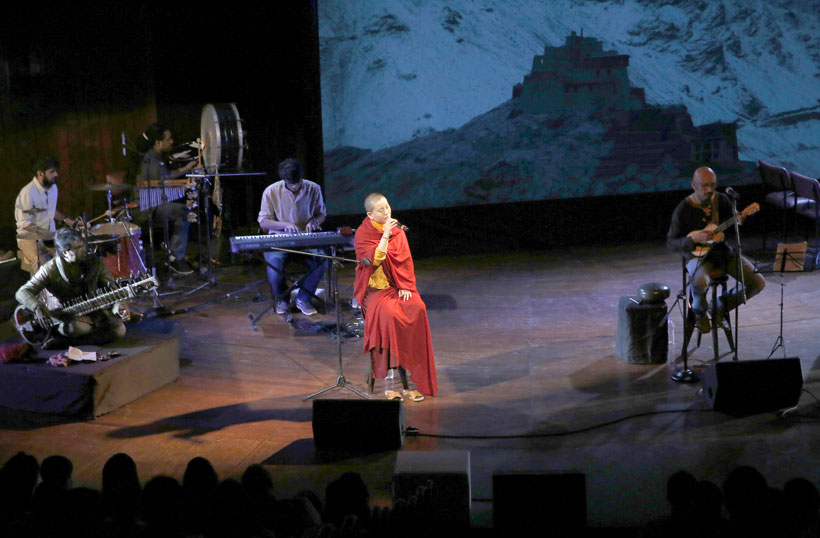 KATHMANDU, Oct 16: There is one Buddhist nun everyone in Nepal knows by name — not because she's a religious icon and a UNICEF goodwill ambassador, nor for her work running a girl's school and a hospital for kidney patients.

Ani Choying Drolma is famous as one of the country's biggest pop stars.

With more than 12 albums of melodious Nepali tunes and Tibetan hymns that highlight themes of peace and harmony, the songstress in saffron robes has won hearts across the Himalayan nation and abroad.

"I am totally against the conservative, conventional idea of a Buddhist nun," the 45-year-old nun said. Some people "think a Buddhist nun should be someone who does not come out in the media so much, who is isolated ... always in a monastery, always shy. But I don't believe in that."

Neither do her fans, who greet her with a roar of applause whenever she walks out on stage, and fall silent as she closes her eyes to sing.

"Every time I get frustrated with life or get angry, I just listen to Ani's music and I calm down," said one fan, Sunil Tuladhar. "She is my music goddess."

But with a career deviating sharply from what conservatives in Nepal believe to be the proper path of a Buddhist, she's caught criticism as well. One Buddhist monk at the famed Swayambhu Shrine questioned how she can reconcile the simple life of a religious ascetic with the fame and wealth she's amassed over her two-decade musical career.

"How can a nun be making money by selling her voice, living a luxurious life and yet claim she is a nun?" Surya Shakya asked.

Despite her fame, Drolma looks every bit the typical Nepalese Buddhist nun, with her hair shaved short and an ever-present smile. She travels the world giving concerts in countries including the United States, Brazil, China and India.

Popular composer Nhyoo Bajracharya, who has worked with Drolma, describes her music as a fusion of traditional Tibetan and Nepali styles. "They are religious songs, slow rock with flavors of blues and jazz combined," he said.

But Drolma believes her singing goes beyond delivering a catchy tune. Her 2004 hit "Phoolko Aankhama," which means "Eyes of the Flower" in the Nepali language, features lyrics that touch on religious teachings: "May my heart always be pure/May my words be always word of wisdom/May the sole of my feet never kill an insect."

Her singing offers listeners a way to practice meditation and "is about invoking a spiritual quality," she said in a recent interview with the Associated Press. "That is what I rejoice in."

She refused to say how much money she has earned from album sales and concerts, but said she donates much of it to education charities through her Nun's Welfare Foundation and runs a kidney hospital.

Still, compared with most Nepalese living in this impoverished mountain nation, Drolma lives like a rock star — with a luxury car and a new home in an upscale neighborhood of the capital of Kathmandu.

Drolma said she was 13 when her mother allowed her to join the Nagi Gompa nunnery to escape from an abusive father. She also dreaded getting married, as she would likely have been forced to do as it was the custom in Nepal at the time.

"I had the impression that getting married was the worst thing to do in life," she said.

At the nunnery, just north of Kathmandu, she learned to chant the Buddhist scriptures. But while most recited the lines quickly, she stood out — chanting melodiously and drawing the other nuns' admiration.

In 1994, American musician Steve Tibbetts visited the nunnery and, being impressed with her voice, recorded her singing. He returned after receiving interest from U.S. record companies, and recorded Drolma's first album, "Cho," released in 1997.

The album royalties and performance fees that came after left Drolma a bit stunned. Most Nepalese have humble lives, with a quarter of the country's 28 million people living in poverty and heavily reliant on subsistence farming and remittances from family members working abroad.

"The question was, what do I do with the money?" she said. "I realized that this money can help me fulfill my dream, so that is how I started the school."

She set up an educational foundation and opened the Arya Tara school, on a mountainside just south of Kathmandu. The boarding school offers about 80 girls, aged about 5 to 18, free lessons in Buddhist scripture as well as math, science and computer skills. The foundation also covers the cost of sending the girls to college.

The students, similarly clad in saffron robes, giggle and smile when talking about Drolma.

"Ani is more than my mother. My mother gave me birth, but Ani raised me, gave me education, took care of me and is the only reason that I have reached this far," said 17-year-old Dolma Lhamu, who is now enrolled in college.

Drolma is similarly adored at the kidney hospital she runs in Kathmandu, where hundreds of patients receive free dialysis twice a week.

She said it's her work at the hospital and school that keep her singing and accepting invitations to perform. For the critics who question her globe-trotting lifestyle or high income, she has little patience.

"People in society will have different opinions," she said. "I try my best to see how I can improve my attitude toward life, toward people and toward the world, and to find ways to make the best use of my life.

"I am famous today, but tomorrow people will not know me. It fades away. That is the reality," she said.

KATHMANDU, Oct 13: There is one Buddhist nun everyone in Nepal knows by name — not because she's a religious... Read More...

Taken together, Delhi and the cities bordering it — Faridabad, Gurgaon, Ghaziabad, Noida, etc — make up the world’s second... Read More...