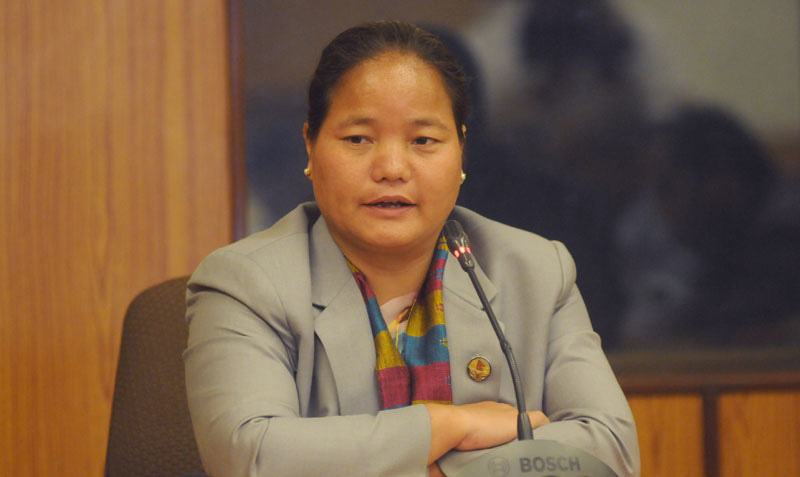 KATHMANDU, April 3: Speaker Onsari Gharti has said the Nepal's constitution has granted opportunities for equality to all Nepali citizens.

Taking part Sunday in the General Debate on "Redressing Inequalities: Delivering on Dignity and Well-Being for All" under the 136th Inter Parliamentary Union (IPU) Assembly being held in Dhaka, Bangladesh since April 1, the Speaker said, "The Constitution of Nepal has adopted various inclusive provisions of social justice, particularly for women, indigenous nationalities, marginalized communities or disadvantaged segments of the society as well as for those living backward in order to mainstream them into the various State affairs."

The topic of this general debate, "Redressing inequalities: delivering on dignity and well-being for all" has a very wide scope of action as this issue is deeply associated with the Sustainable Development Goals- the SDG 10, that calls "Reduce inequalities within and among Countries, she added.

The Speaker informed the Assembly that country Nepal was working on harmonizing policies and programs to incorporate the SDGs into national development plans focusing on the objective of addressing poverty, reducing inequalities, and creating opportunities for all, adding that Nepal was very much aware that inequalities may cause conflicts and Nepali citizens have also observed that inequalities in social and economic sectors could lead to political unrest in a nation.
Other SDGs, in particular the SDG 1: "End poverty in all its forms everywhere", the SDG 5 "Achieve gender equality and empower all women and girls", and the SDG16 "Promote peaceful and inclusive societies for sustainable development, provide access to justice for all and build effective, accountable and inclusive institutions at all levels", are close inter-linked with the topic of this Assembly.

The main essence of these SDGs is to include all the segments of the society in order to redress inequalities. Any kind of unequal behavior and activities within the society, the country, and among the countries in the world remains the greatest threats not only to sustainable development but also for the global peace and harmony, the Speaker asserted.

In many developing countries, large segments of our population are still far behind with regards to the generation of minimum income for their daily livelihood. The level of economic, social, and political participation of deprived population of the society is quite far behind in comparison to the people having multiple opportunities. Therefore, inequality among human beings is an alarming issue at the national level as well at the global level debates, according to the Speaker.

Stating that we may all share the similar thoughts that ensuring of equal opportunities especially in the economic, social, and political sectors of society would definitely assist to reduce the multiple inequalities that continue to prevail in our societies, the Speaker said it was therefore vital that respective parliaments, as the representative body of their people address these inequalities through the making of necessary laws, budgetary sanctions and oversight to the policies and programs of the governments.

The Speaker went to say that another important measure to redress inequalities is to ensure social justice, dignity and protection to those in need which contributes to nurturing human dignity and well-being for all in the society. To this end, the benefits and bonus of development and growth must be shared justifiably and not be concentrated within a select few in the society and nation.

The Speaker expressed her belief that all segments of the society must benefit from the growth and advancement. The government needs to adopt appropriate policies and programs of social justice to ensure benefits sharing of the overall developments without discouraging entrepreneurship. I believe, the similar approach of reducing inequalities can be applied to minimize existing gaps among the least developed, developing, and developed countries across the world.

We all share the view that inclusion in socio-economic and political sectors along with State institutions plays a significant role in reducing inequalities and overcoming deprivation. The issues of inequality need to be urgently addressed at the local, national, regional, and at the global level. This forum of global Parliamentarians needs to work more in assessing our efforts to redressing economic, social, political and other forms of inequalities, she added.

She said she was very much confident that the 136th IPU Assembly would result in constructive exchange of ideas and adoption of more pragmatic resolutions for addressing inequalities across the societies and nations in the world in the days ahead.
The Assembly will run until April 5. RSS

BAGLUNG, Nov 12: Former Speaker Onsari Gharti has said that the constitution has moved ahead towards its practical implementation along... Read More...

GULARIYA,Oct 3: The Nepal's Constitution has been published in the Tharu language spoken in western Nepal. ... Read More...