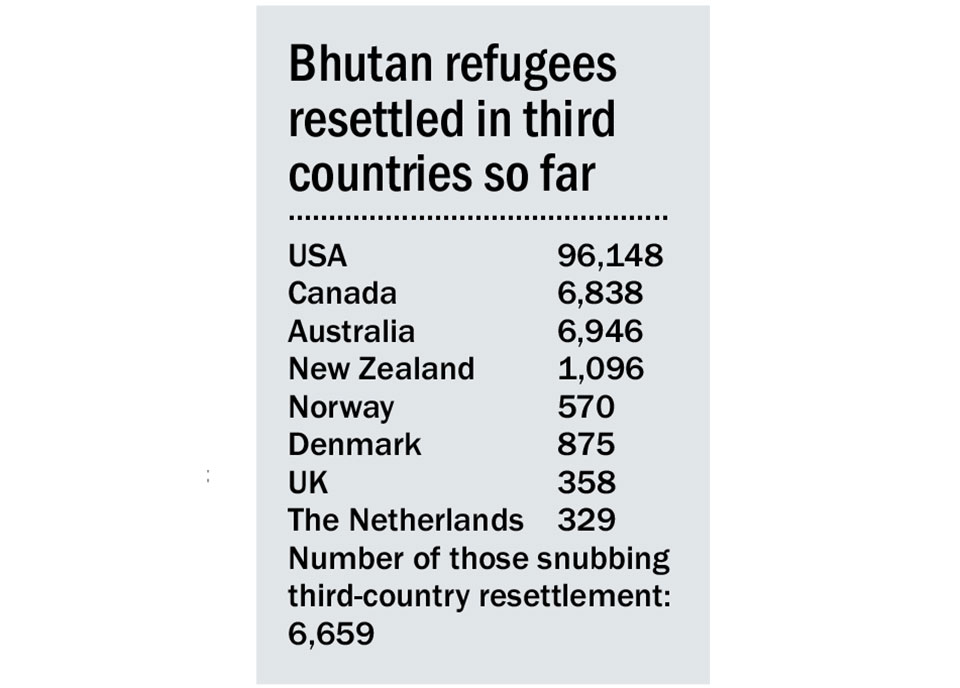 KATHMANDU, Nov 5: As the new government led by Lotay Tshering of Druk Nyamrup Tshogpa (DNT) party gets a full shape in Bhutan after the third democratic elections last month, Nepal looks forward to holding fresh talks with the Druk government to resolve the nearly three-decade-long Bhutanese refugee problem once and for all.

Senior government officials in Kathmandu say they are expecting cooperation from the new government in Bhutan to repatriate little over 6,000 refugees, who declined to be part of the third country resettlement program that is set to conclude next month.

Altogether  6,659 Bhutanese refugees, who either wish to return home or stay in Nepal, are currently living in the camps at Beldangi and Shanischare in eastern Nepal, according to the United Nations High Commission for Refugees (UNHCR)-Nepal.

Home Ministry spokesman Ramkrishna Subedi said the priority of Nepal government is to facilitate their repatriation as per their wishes. “Since those who chose a third-country resettlement have already been resettled in various eight countries, our priority now is to repatriate the remaining refugees through negotiations with the Bhutanese side,” said Subedi.

Prime Minister Tobgay then had assured to discuss the future of the remaining refugees once the ongoing third country resettlement program was over. Officials at the Ministry of Foreign Affairs (MoFA) said the matter, however, was not discussed in detail during the meeting with the chief advisor to the Interim Government Chief Justice Dasho Tshering Wangchuk, who led Bhutanese delegation in the fourth BIMSTEC Summit held in Kathmandu in August, as Bhutan was then awaiting a democratically elected government after election.

Foreign Secretary Shanker Das Bairagi said repatriation of those not willing to go to third countries is the long-held position of Nepal to permanently resolve the refugee issue. “Since a new government is already is in place in Bhutan after the elections, it is appropriate time to hold fresh negotiations to resolve the issue,” he said.

Officials in Kathmandu are optimistic that Bhutanese side will demonstrate requisite gesture this time to resolve the issue now once and for all.

As the donors, one after another, are withdrawing their support for the remaining refugees with the third country resettlement program coming to an end in December, Nepal is under pressure to work out a transitional arrangement for the refugees. As for instance, the World Food Program, according to officials, announced to suspend its physical and technical support by December-end. MoHA has asked some Rs 70 million from the Ministry of Finance to give continuity to the services being provided to the refugees by the WFP.

According to Senior External Relations Associate at UNHCR in Kathmandu Deepesh Dash Shrestha, UNHCR, in partnership with the government and development partners are working to promote self-reliance and empowerment as part of alternative durable solution for the refugees. “As a part of the local solution, UNHCR is engaged in mainstreaming refugees’ access to national services and governmental institutions in sectors such as health and education,” he said.

Besides supporting to strengthen the capacity of the local health institutions in sectors such as health and education, the UNHCR said it has also been implementing livelihood initiatives. But as Nepal is opposed to any forms of local integration till date, these measures are less likely to be helpful in finding durable solution to the problems of those still living in the two refugee camps.