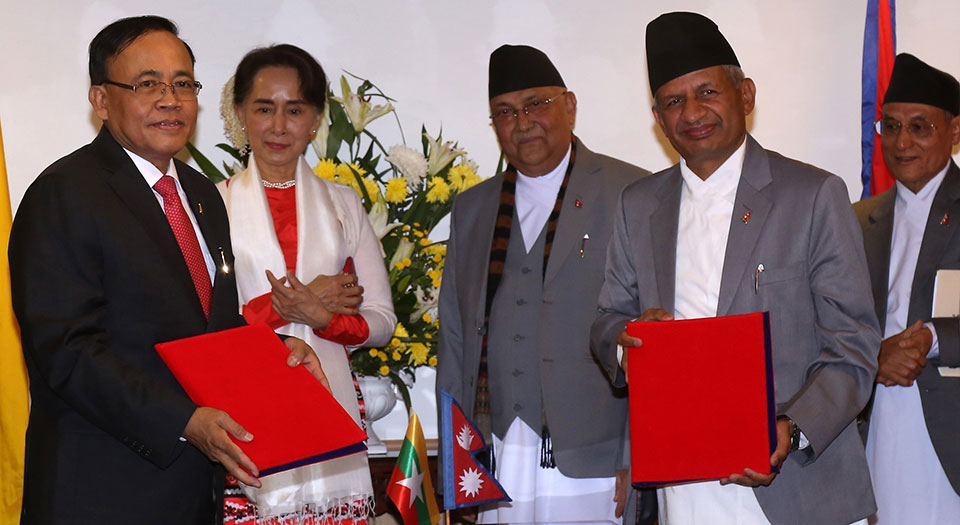 KATHMANDU, Nov 30: Nepal and Myanmar have signed an agreement on trade and investment today. This is the first time such agreement has been reached between the two countries.

The agreement was signed following the one-on-one meeting and the bilateral talks between Prime Minister KP Sharma Oli and the State Counsellor of Myanmar, Aung San Suu Kyi, in the presence of the two leaders.

The Myanmar leader is currently on an official visit to Nepal at the invitation of PM Oli and in connection to taking part in the Asia Pacific Summit. She arrived in Kathmandu on Thursday.

Minister for Foreign Affairs Pradeep Kumar Gyawali and Minister for International Trade and Cooperation, Kyaw Tin signed the agreement on behalf of Nepal and Myanmar, respectively.

The agreement has paved the way for more bilateral investment and trade especially in food grain, tourism and cultural exchange between the two countries. The Federation of Chambers of Commerce and Industry of the two countries already have an agreement on trade and exchange since the past.

Dr. Rajan Bhattarai, foreign affairs advisor to Prime Minister Oli, who was present in the bilateral meeting, said that discussions were held on the occasion to expand the trade and economic relations as well as to establish air connectivity between the two countries. At present, lentil and food grain is supplied to Nepal from Myanmar, and the agreement is believed to help stabilize the price of lentil.

Dr. Bhattarai said direct air services would be started between Nepal and Myanmar once the international airport is constructed in Lumbini. He added that an understanding has been reached whereby Myanmar would extend cooperation to increase the number of visitors from Myanmar to Nepal in view of the Visit Nepal Year 2020 that the government of Nepal has announced.

The foreign affairs advisor of the Prime Minister expressed the belief that trade and investment would grow between the two countries in the coming days as Nepal, a country where the Buddha was born and Myanmar, a predominantly Buddhist nation, have sentimental as well as business ties.

Myanmar has constructed a temple in Lumbini, the birthplace of Gautam Buddha.

PM Oli and Myanmar State Counsellor Suu Kyi also held discussions on the topic of both sides working to further activate the Bay of Bengal Initiative for Multi-Sectoral, Technical and Economic Cooperation (BIMSTEC).

Then Prime Minister of Nepal, Sushil Koirala had paid an official visit to Myanmar in 2014 during the BIMSTEC Third Summit held in Myanmar. Myanmar’s Prime Minister U Sen Wing had visited Nepal during the coronation of King Birendra of Nepal in 1975.

Then Kin Birendra Shah had made a State visit to Myanmar in 1980. Nepal and Myanmar established diplomatic relations on March 19, 1960.

Myanmar had submitted its proposal for membership of the SAARC in 2008.

It is estimated that there are around 200,000 people of Nepali origin in Myanmar earlier known as Burma.

Kathmandu has changed: Suu Kyi
Visiting State Counsellor of Myanmar Suu Kyi remarked that the Kathmandu she experienced during her previous visits looked different in many ways.

Suu Kyi had accompanied her British husband to Nepal for his research in 1973. Suu Kyi who is of Buddhist faith has her Guruma named Anagarika Dhammbawati in Nepal.

PM Oli had presented Suu Kyi a copy of Social Studies book of grade 9 in Nepal which documents her life and times. 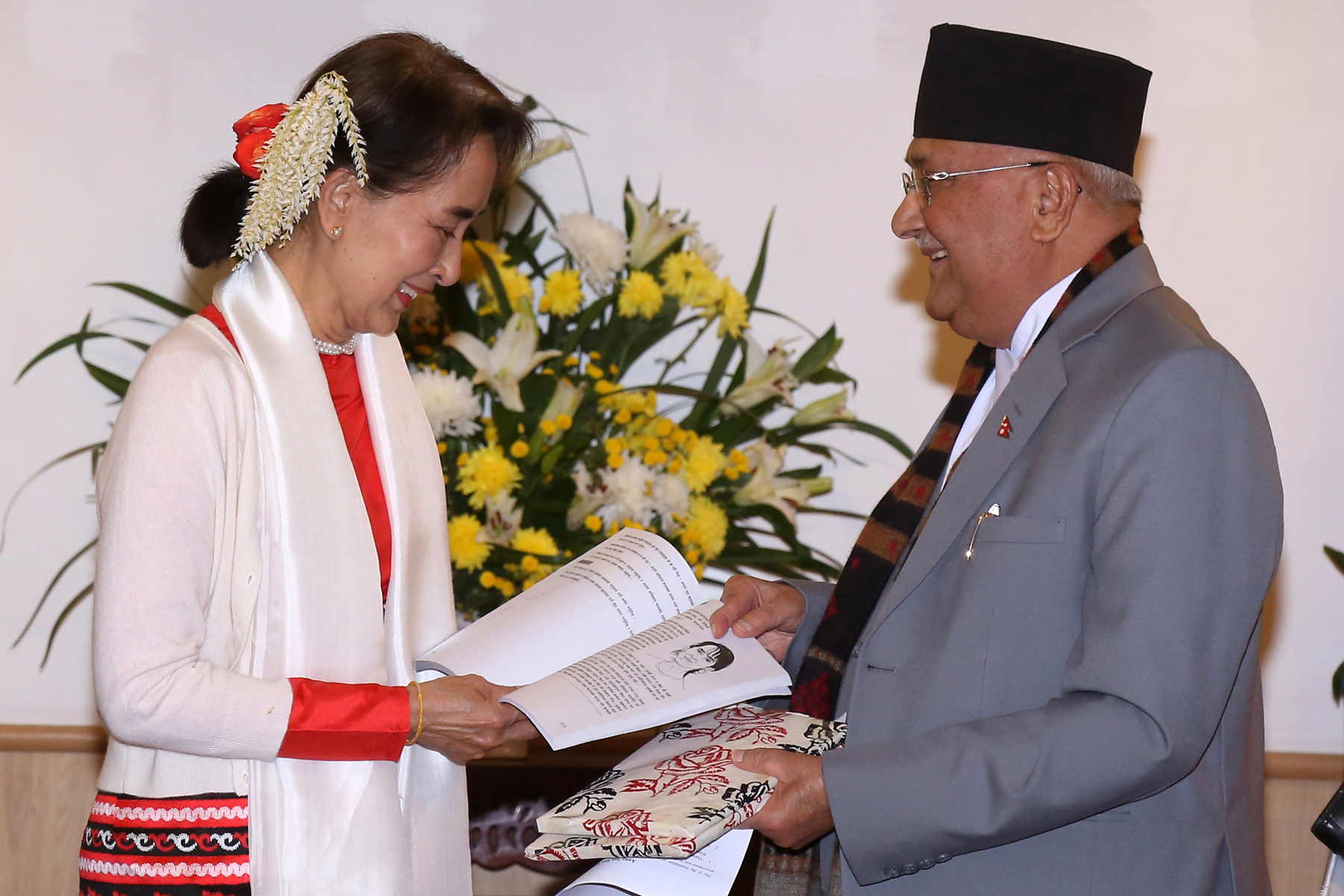 Myanmar, Nepal set up first ever Chamber of Commerce to promote investments

KATHMANDU, Nov 22:  Myanmar and Nepal have set up the first ever Chamber of Commerce established in Yangon since the... Read More...