Nepal kicks off SAFF U-15 C’ship against Maldives today 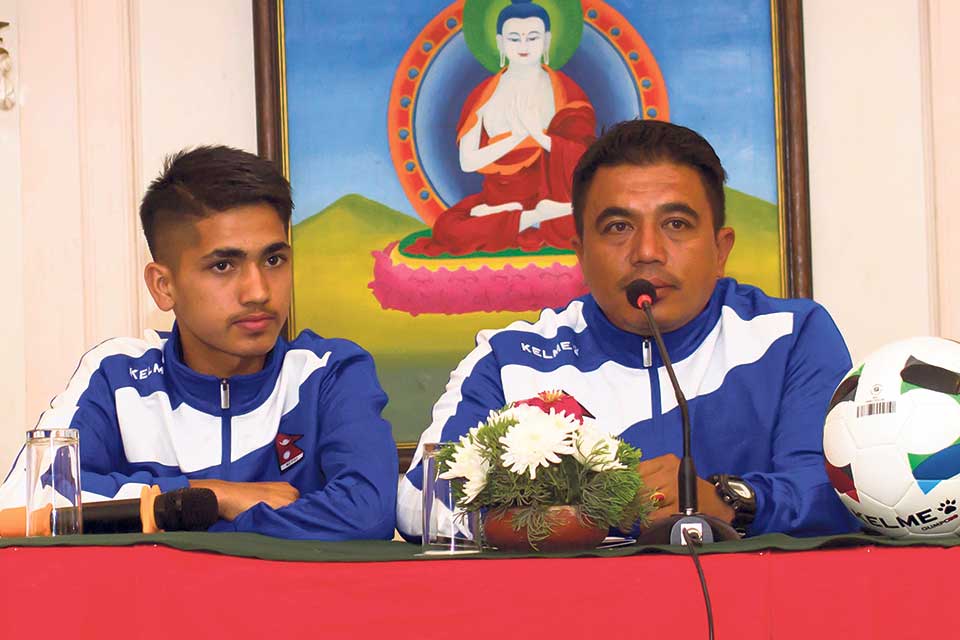 KATHMANDU, Oct 25: Nepal U-15 men’s football team is starting its SAFF U-15 men’s championship campaign against Maldives on Thursday.

Nepal head coach Sanoj Shrestha said that the target of the team is to win the title.

Speaking at a pre-match press conference in Kathmandu, Shrestha said that the team is comprised of academy players and the preparations have been good. Nepal is pitted in Group A along with Maldives and Bangladesh.

“Most of the players in our team are from the All Nepal Football Association (ANFA) Academy and I have been watching them train for a year. We held the selection before Dashain and we also have five good position-wise players from various districts,’’ Shrestha said, adding, “We will give our best performance in the tournament and our target is to win the title. The age-group competitions are always tough, but we have fit players for every position including the substitutes.”

Meanwhile, Maldives head coach Ibrahim Halim said that his side prepared and trained for about two months. The team consists mostly of 13 and 14-year-old players.

“We trained for about two months prior to the tournament and we have young players in the side. Our target is to prepare well for other Asian Football Federation (AFC) tournaments,” Halim said. “The main problem is the climate here as it is rather cold here, but the adaptation to it is very important. Nepal is a strong team in the age group level, and they are better than us. We will play to win and we have selected the players from inter-school tournaments. We need to take advantage of Nepal’s weakness,” he added.

Likewise, Bangladesh head coach Mostofa Anohiar Parrez said that the team is well prepared for the tournament and he is looking forward to see the Nepal-Maldives contest to analyze the match.

“We will first analyze the match between Nepal and Maldives in order to decide what tactics to use against those sides. Our target is to reach the semifinals of the tournament. That is our first target,” Parrez said.

The tournament hosted by Nepal consists of Maldives, Bangladesh, Pakistan, Bhutan and India. It will run till November 3.

The ANFA had announced the 23-member team for the tournament two weeks ago. It had held joint training sessions for 26 players from the ANFA Academy and 45 from different districts.

A total of 18 players from the academy and five from different districts were successful to get a place in the final team.

The Group B of the tournament consists of India, Bhutan and Pakistan.

Nepal will play its last match of the group against Bangladesh on October 29.

The top two teams of each group will reach the semifinals of the tournament. Nepal is the runner-up of the last edition of the tournament as it had suffered a defeat against India in the final.

Nepal to play against Pak after B’desh defeat