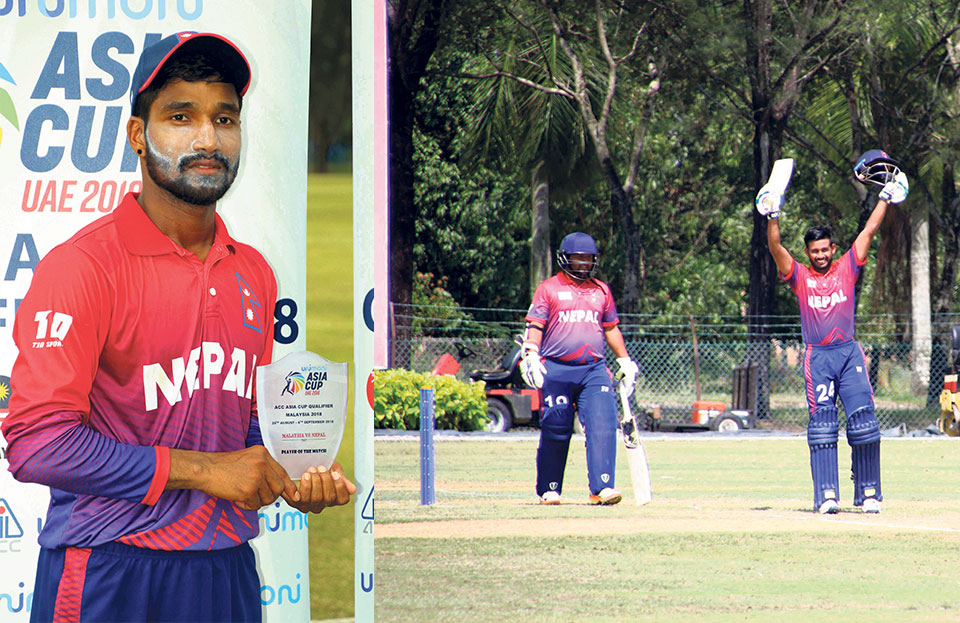 Nepal national cricket team’s Dipendra Singh Airee poses with his player of the match trophy after a 2018 ACC Asia Cup Qualifiers match against Malaysia at the Bayuemas Oval in Kuala Lumpur, Malaysia on Saturday. Nepal’s Aarif Sheikh raises his bat after scoring a half century during the match. Photo Courtesy: Raman Shiwakoti

KATHMANDU, Sept 2: Nepal national cricket team registered their first win at the ongoing ACC (Asian Cricket Council) Asia Cup Qualifiers defeating Malaysia by 19 runs in Kuala Lumpur on Saturday. A heroic 101-run partnership between Dipendra Singh Airee and Aarif Sheikh helped Nepal post 188 runs on board in a rain-shortened match of 30 overs each side against the host nation.

Chasing 189 runs to win, the division four team of Malaysia looked likely to pull off the chase when it scored 151 runs for the loss of five wickets at the start of the 26th over. However, two wickets from teen sensation Sandeep Lamichhane in his last spell of the day tilted the match in Nepal’s favor. He dismissed Syahadat Ramli and Ezat Idrus in quick succession for 16 and zero runs, respectively. The eighth and ninth wicket soon followed as Malaysia lost its way towards the end overs losing last four wickets for 13 runs. Malaysia was limited to 169 runs for the loss of nine wickets in their 30 overs.

Veteran left-arm spinner … was pick of the bowlers who scalped three wickets in a 6-over spell conceding 36 runs.

Faiz smashed two fours and a six in his 28-ball stay, whereas Singh anchored his innings through 34 balls at the crease including a four. Similarly, Muniandy was caught by Airee after 13-ball stay.

Sompal Kami picked up a brace with a wicket in either side of the Malaysian innings as he claimed the first wicket of the innings Shafiq Sharif and eighth wicket Anwar Rahman for nine and zero runs respectively.
Part-time off-spinners Sagar Pun and Dipendra Singh Airee chipped in with a wicket each.

Earlier, Malaysia won the toss and invited Nepal to bat first to take advantage of any dampness in the pitch due to the early rain delay. Nepal replaced Rohit Kumar Paudel and Karan KC with Anil Kumar Sah and Lalit Bhandari, respectively.

Nepal soon was on back foot as Malaysia produced a combined bowling effort, removing Nepal’s five top-order batsmen for 60 runs within 13 overs. Khakurel was the first wicket of the day following up his fifty by 9-run innings from 8 deliveries, which included two boundaries. He was dismissed by Idrus.
His new opening partner Sah made 16 runs on his return in the team from 33 balls before being adjudged LBW by Muniandy.

Gyanendra Malla, demoted to number 3, made 11 runs from 20 runs before giving Muniandy his second wicket of the day The Malaysian bowler further dismissed Sagar Pun for a golden duck to make it three.
After skipper Paras Khadka’s wicket, Nepali innings stood at meager 60-5.

However, a 101-run partnership between Airee and Aarif took Nepal’s score to 161 in 27.3 overs before Airee was clean-bowled by Idrus for 54 runs. Airee faced 51 deliveries and smashed 6 fours and a six in a coming of age innings.

Aarif continued pushing Nepal's score although wickets kept tumbling at the other end after Airee’s dismissal.

Aarif finished with 64 not out runs from 48 deliveries including five fours and two sixes. Nepal scored 188 runs in 30 overs for the loss of seven wickets.

Airee was chosen player of the match for his all-round performance of 54 runs and a wicket in the match.

OTHER MATCHES
In the other matches of the day, both Oman and Hong Kong registered big wins against Singapore and the United Arab Emirates (UAE).

Skipper Anshuman Rath and Babar Hayat smashed centuries in a win against the UAE in a 49-over match played at UKM-YSD cricket oval, Bangi, to keep their qualification hopes intact on Saturday.
Rath smashed 9 boundaries and 2 sixes scoring 102 runs facing 113 deliveries, whereas Hayat made 107 runs facing 105 balls including 2 boundaries and 9 sixes after the UAE won the toss and invited Hong Kong to bat first.

Hong Kong ended up with 275 runs for the loss of eight wickets in their 49 overs. In reply, the UAE folded out for 93 runs in the 25th over to concede a huge loss of 182 runs. Hong Kong’s Ehsan Khan was pick of the bowlers with four wickets. Hayat was adjudged the player-of-the-match for his blistering innings.
Similarly, Oman rocked past the Singaporean total of 215 runs in 26.4 overs to register their third win of the tournament.

Oman is the only unbeaten team of the qualifiers so far, after the completion of third round of league matches.

Oman opener Aqib Illyas smashed a whirlwind century of 108 runs from 71 deliveries to achieve the target quickly. The player-of-the-match smashed 12 boundaries and 6 sixes. Earlier, Bilal Khan picked up four wickets to limit Singapore to 215 runs for the loss of eight wickets in 50 overs after they won
the toss and elected to bat first.

QUALIFICATION SCENARIO
Nepal’s qualification to final chances hinges upon the results of other matches in the league.
Nepal will have to defeat both Hong Kong and Singapore with considerable margins to improve the paltry net run-rate of 0.555 and hope for Oman to win all their matches.

That way, the UAE will tie with Nepal on points and the net run rate will determine which team will qualify for final, given that both teams win their other league matches against Malaysia and Singapore.

Also, if the UAE happens to stumble against host nation Malaysia and Oman, and Hong Kong loses to Oman, a win against Hong Kong in the final league match will be enough for Nepal to reach the final, given Nepal wins against Singapore on Sunday.

FIXTURES
Nepal will face Singapore at Bangi on Sunday in a must-win match. Similarly, Hong Kong will face Oman and the UAE will play against Malaysia at Kuala Lumpur on Sunday.

ACC U-19 regional tournament: Nepal posts a target of 327 runs to Singapore

KATHMANDU, July 5: Nepal posted a target of 327 runs before Singapore in the group's concluding match held today under... Read More...

Defending champion Nepal to face Malaysia in the final