Nepal inches up one spot in HDI ranking 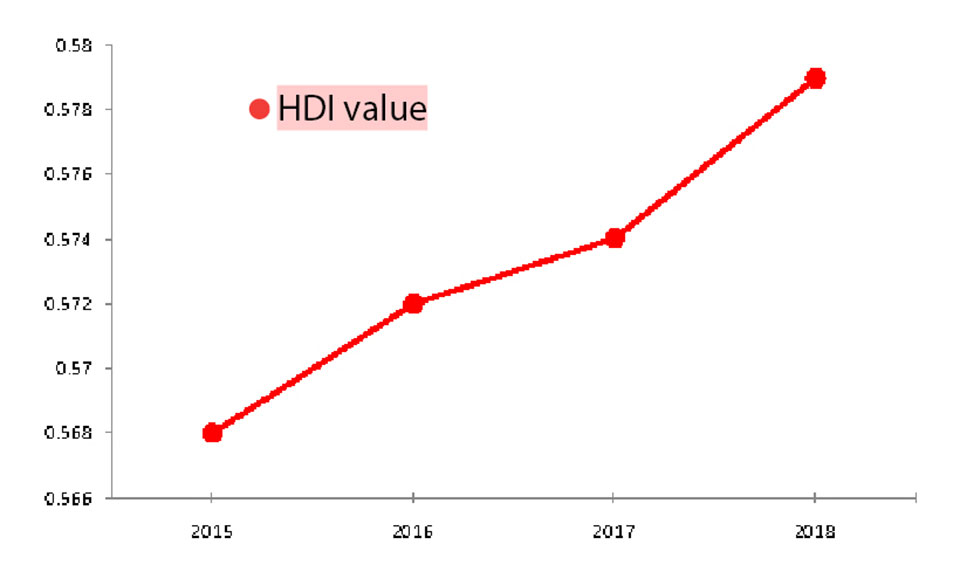 The Human Development Report unveiled by the United Nations Development Programme (UNDP) in Kathmandu on Tuesday revealed that the country's status in human development almost remained stagnant in 2018. The country's HDI stands at 0.579, only 0.005 points more than the index of 2017.

Similarly, gross national income (GNI) per capita in purchasing power parity of 2011 is the indicator to measure the standard of living.

The latest report shows that Nepal has just maintained its position in the Medium Human Development with the threshold of 0.55-0.69 points. Among SAARC nations, Nepal is ahead of only Pakistan and Afghanistan. Nepal's HDI is also far below the average index of 0.642 for South Asian countries that includes the SAARC member countries and Islamic Republic of Iran.

However, there was nominal progress in terms of life expectancy and education indicators, according to the report.

The gender inequality index of Nepal is 0.476 which reveals that there is still a huge gap between the HDI for men and women in the country. The HDI for men is 0.612 while that for women is 0.549.

The report has also pointed out that prevailing inequality is threatening human development. “The gap in basic living standards is narrowing for millions of people. However, inequalities surrounding education, and around technology and climate change, have sparked demonstrations across the globe,” reads the report.

Speaking at the report launching event, Minister for Finance Yuba Raj Khatiwada stressed the need for political, social and economic transformation for reducing existing inequality. “Institutional reforms in these areas are the foremost requirement that can help minimize the gap at various levels,” he added.

Khatiwada also expressed dissatisfaction with the developed nations for not providing the pledged financial assistance to underdeveloped countries which, in his view, could also help reduce the inequality. “In addition, there is a need for restructuring in global institutions and global policy making to reduce the gap among the countries,” he added.

Speaking at the event, Dagny Mjos, deputy head of mission at Royal Norwegian Embassy, Kathmandu, said Norway was able to reduce inequality through implementation of broad-based taxation system, tax incentive to the needy sector and maximization in woman participation.

Similarly, Sri Lankan Ambassador to Nepal, Himalee Subhashini, said that Sri Lanka was able to reduce inequality through huge investment in health and education services for a long time period.

Norway, with HDI of 0.990, stands at first position, while Sri Lanka is ranked 71st among 189 countries.

Human development should be seen as an extensive, innovative, appreciative and community procedure, rather than a simple expansion of health,... Read More...

JUMLA, Jan 12: The daughter security program is proving to become effective and fruitful. The initiative has been launched by the... Read More...