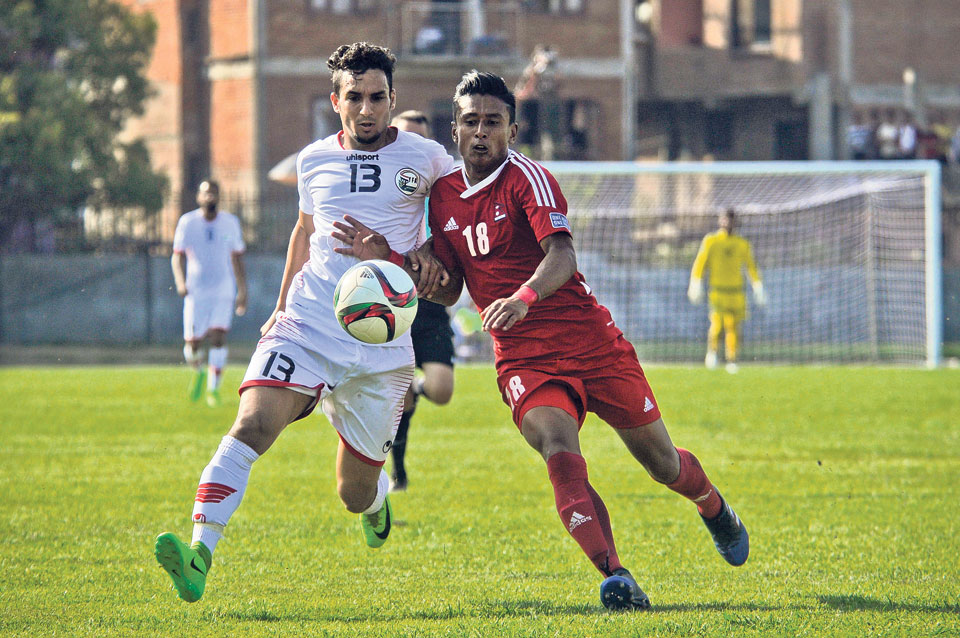 KATHMANDU, June 13: Nepal held Yemen to a goalless draw in its first home match of the AFC Asian Cup 2019 Qualifiers on Tuesday.

Displaying an improved performance than its recent friendly match against India which it lost 2-0 on June 6, Nepal was able to stop a comparatively strong Yemen team, ranked 45 places above it in the FIFA rankings, from scoring at APF Stadium in Halchowk, Kathmandu.

Nepal, which had lost its first match of the qualifiers against the Philippines, has now accumulated one point while Yemen provisonally stays atop the table with four points in Group F. However,  the result of the late match between Tajikistan and the Philippines on Tuesday evening could turn the table. Tajikistan is yet to gather any point while the Philippines has three points that came from victory over Nepal on March 28.

On Tuesday's match, Nepal enjoyed superior ball possession at the Armed Police Force (APF)'s stadium but couldn't create enough clear-cut chances. Nepal's forwards taking too many touches 18 yards from the post and failing to convert the chances also prevented Nepal from sealing victory in front of about 700 home spectators.
After the match, head coach Gyotoku Koji said that Nepal is still plagued by attacking woes. "Yemen is a different kind of team than India so we had changed our attackking style but still we failed to produce any goal. We have to improve this and for that we will work hard in training and get prepared for upcoming matches," said Koji.

However, the Japanese expressed his happiness over the result. "Yemen is a very strong team than us so a draw against it should be taken as a good result," said Koji, adding, "Our upcoming matches will be more tough than this. The next opponent Tajikistan is very strong so we must be ready."

Nepal will face Tajikistan in its third match of the qualifiers on September 5 in home ground.

Earlier, Yemen made a good start to the match making an impressive attempt in the 5th minute with its striker Ala Mohammed Abdullah Al Sasi charging the ball from close range but man-of-the-match Kiran Kumar Limbu made a brilliant save.

Koji had started Bharat in place of Bimal Gharti Magar to partner Nawayug Shrestha up front, while he brought in Bishal Rai instead of Heman Gurung to play in central midfield alongside Rohit Chand.

Meanwhile goalkeeper Kiran Kumar Limbu said that their friendly match against India played last week helped to sort out the weaknesses of the team in order to give improved performance against Yemen. "We had travelled to the Philippines without playing any friendly match. But we played against India before this clash and it helped us a lot to sort out the problems," said Kiran.

Yemeni head coach Abrham Mebratu said his team landed in Kathmandu with the objective of gathering full three points but said that a draw wasn't a bad result. "We came here for three points and a draw was our minimum target but it is not a bad result," said head coach Mebratu, adding, "We want to write history in Yemeni football by qualifying to the final rounds. Since we have many games left we are hopeful of reaching the target."
He also praised the performance of his players. "Despite observing Ramadan fast, my players played really well. We had some great chances to score but Nepali gaolkeeper made outstanding saves to prevent us from scoring," added Mebratu.

KATHMANDU, June 13: Nepal is seeking to score in the match of AFC Asian Cup 2019 Qualifiers match against Yemen.... Read More...