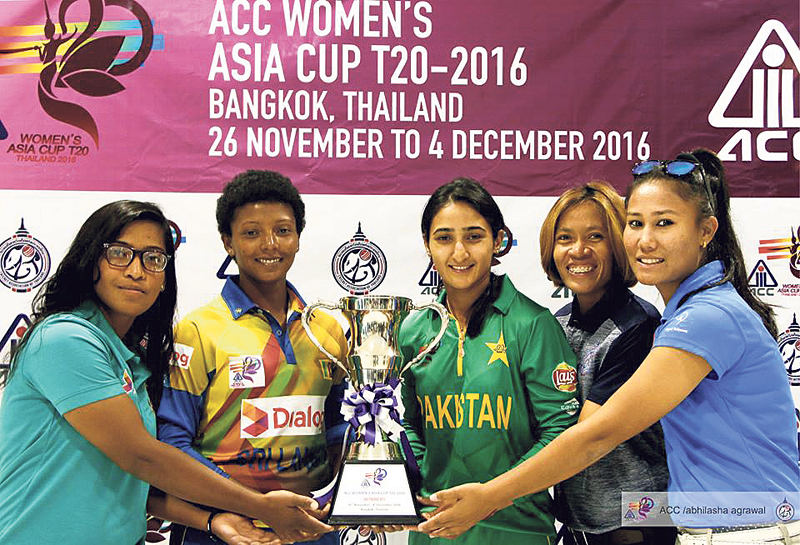 Nepal’s captain Rubina Chhetry (R) poses for a group photo along with captains of other participating teams of the ACC Women’s Asia Cup T20 2016 in Bnagkok, Thailand on Friday. Photo Courtesy: Acc

KATHMANDU, Nov 25: Nepali national women’s cricket team, which flew for Thailand to take part in Women’s Asia Cup T20, with the aim of beating at least one Test playing side will take on Pakistan in its opening match of the tournament on Saturday.

“This is the biggest tournament our team is participating so far and we have prepared well. Our primary target is to beat one of the Test-playing nations,” Head coach Raju Basnyat had said this before the team left for Thailand on Wednesday.

However, overcoming Test playing opponent like Pakistan in the Asia Cup will be a tough nut to crack for Nepal given its inconsistent batting lineup.

Nepali eves put up under par batting performance in the ICC Women’s World Cup Qualifying Series Asia Region in Hong Kong, though it finished runner up. The highest score Team Nepal managed was 108 runs against Thailand. Nirmala Shahi and Nary Thapa were the only batswomen for Nepal to make notable contributions in Hong Kong held from October 7 to 16.

Nirmala, who made 36 runs against Thailand in World Cup Qualifying Series Asia, is ruled out from the tour owing to injury. Nirmala is suffering from groin injury and will be out of action for next three weeks. Before leaving for Thailand head coach Basnyat and captain Rubina Chhettri had stressed on the need of improving weak batting in the Asia cup. “I have expected better performances from openers. If they start the game well it will be helpful for other batswomen too,” Basnyat had said.

However, Nepali batting line up was once again exposed when it faced Thailand in a practice match on Friday in Bangkok. Nepal was all out for 63 runs in the match against host team. Nary Thapa was the only Nepali player to contribute in double digit. She scored 17 off 23 deliveries while the second highest scorer Neera Rajopadhyaya contributed just seven runs.

Saturday’s match between Nepal and Pakistan will be the third meeting between two South Asian nations. Nepal had played two practice matches against Pakistan in 2011 to prepare for ACC Women’s Twenty20 Championship 2011 held in Kuwait. However, Nepal had lost both of the T20 matches by 83 and 116 runs respectively.

Nepal secured place in the Asia Cup by the virtue of runner up at the ICC Women’s World Cup Qualifying Series Asia Region behind Thailand. This is the second occasion Nepal is taking part in the Asia’s biggest women’s cricket competition.

Nepal had lost all its group matches against Bangladesh, Sri Lanka and China in the ACC Women’s Asia Cup T20 2012 held at Guangzhou, China.

Nepal will face Sri Lanka on Monday, two days after facing Pakistan. Similarly, it will vie against Bangladesh on November 29 and Thailand on December 1. Nepal will face India in its last group match on December 2. The top two teams from the group will vie for the title.