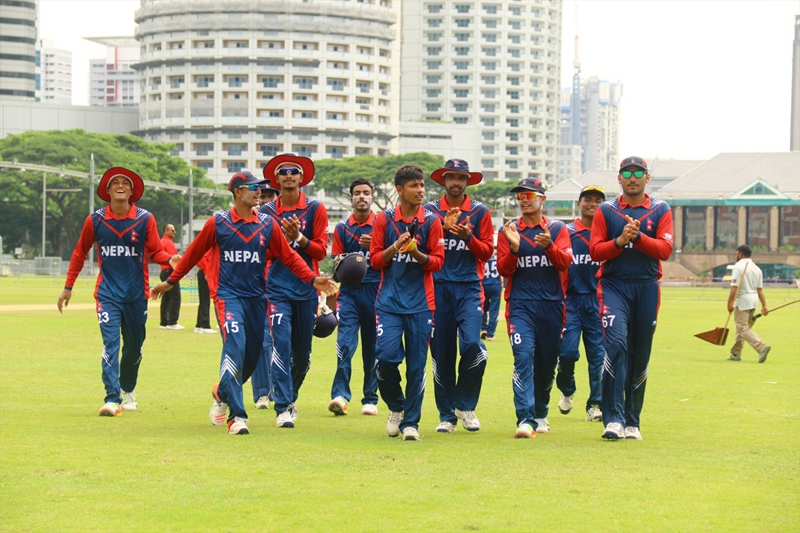 Nepali youth cricket team had landed in Singapore with the aim of qualifying for the world cup but a humiliating 141 runs defeat against Afghanistan has lowered its chances.
Nepal is currently in the second position in the table with six points from four matches while table topper Afghanistan has eight points from equal number of matches.

The Nepali team had started the campaign with four wickets win over home team Singapore and saw off Malaysia by five wickets in the second match of the qualifiers being held in double round robin league format. Nepal's only defeat in the competition came against Afghanistan in the third match while it regained its winning form registering 22 runs victory over Singapore on Friday.

Now, Nepal will have to beat Singapore again but with a big margin on Monday and also will have to overcome Afghanistan in a similar way in its last match one day later to keep its qualifying hopes alive. Since only one team will qualify for the world cup to be held in New Zealand next year, Nepal doesn't have option rather than winning the two remaining matches with big margin in order to make a better run rate than Afghanistan. Meanwhile, Afghanistan also will be in action against Singapore on Monday.

Nepal's batting has been a major problem since day one of the competition with none of the batsmen being able to reach impressive figure. Dipendra Singh Airee's 54 runs against Singapore is Nepal's biggest individual score until now in the tournament with none other batsmen have touched half century.  The second best performance from Nepali batsmen was 26 runs scored by Pawan Saraff and Sandeep Sunar against Afghanistan and Singapore respectively.

However, bowling has been a positive side of the Nepali team as skipper Sandeep Lamichhane has pocketed 16 wickets to be the qualifiers' highest wickets taker. Sandeep completed a five-wicket haul in the first two matches against Singapore and Malaysia. Likewise, Pawan Saraff has claimed seven wickets while Shahab Alam and Kishore Mahato have taken six wickets each until now.

Bangladesh will have to display both strong batting and bowling in the remaining qualifiers in order to repeat history by booking its place in the next edition of the world cup.

An opportunity has come to punish those who dissolved parliament: Minister Chaudhary
16 minutes ago