Nepal’s Sandeep Lamichhane (left) appeals for a wicket during the ICC Cricket World Cup League 2 one-day international match against the United States at the TU Cricket Ground in Kirtipur on Wednesday.

KATHAMANDU, Feb 13: Nepal secured a record-breaking win by eight wickets against the United States (US) to wrap up the ICC Cricket World Cup League 2 tri-series at TU Cricket Ground in Kirtipur on Wednesday.

The US was all-out for 35 runs, joint record-lowest in one-day internationals (ODIs), batting first before Nepal chased down the target in 32 deliveries to make it two wins in as many matches against the visiting side.

The US was bundled-out in 12 overs, which is a new record in ODI cricket for least number of deliveries before losing all 10 wickets.

Earlier, Afghanistan took 13.5 overs (83 deliveries) to dismiss Zimbabwe for 54 runs in Harare on February, 2017. Likewise, 35 is the joint-lowest score by a team in ODI cricket. Again, Zimbabwe holds the same record being dismissed for same score against Sri Lanka in Harare on April, 2004.

Leg-spinner Sandeep Lamichhane raked records in his career-best spell, registering best bowling figures by a Nepali bowler in ODIs. The player-of-the-match scalped six wickets for 16 runs in six overs, seventh best overall performance by a spinner in ODIs whereas fifth best by a leg-spinner behind the likes of Shahid Afridi, Imran Tahir, Anil Kumble and Rashid Khan.

None of the US batsmen were able to pick his deliveries, losing last nine wickets for 12 runs after Nepal won the toss and put the US to bat first. Xavier Marshall scored 16 runs adding 23 runs with Monank Patel for the second after the failed experiment of Ian Holland being promoted as an opener. Holland lasted six deliveries before edging a catch to Paras Khadka at first slip.

Lamichhane was aided by Susan Bhari’s immaculate line and length yielding four wickets in three overs, conceding five runs off it. Both spinners shared a maiden over each. Except Marshall, none of the US batsmen were able to cross four runs mark with Monank, Aaron Jones and Akhsay Homraj being dismissed on the score.

In a dominant display of spin bowling complemented by the US batsmen’s cluelessness, five were dismissed clean-bowled, two LBWs and three catches were taken at first slip by Paras Khadka. Only three bowlers were used with Karan KC delivering three overs for 13 runs.

Nepal had a tricky start of the chase with both the opening batsmen sent back to pavilion within two runs. Nepal captain Gyanendra Malla was clean-bowled for a run whereas Subash Khakurel was out duck in the fourth delivery he faced. Left-arm spinner Nostush Kenjige claimed both the wickets opening the bowling for the US.

Nepal is scheduled to travel to Namibia in April with Scotland being the third team in the tri-series. Similarly, the US will host Scotland and the United Arab Emirates next month in Lauderhill, Florida. Oman will enjoy a break in the League 2 matches before resuming it against Namibia and the UAE in a trip to the Middle-East in December.

The League 2 forms part of the qualification pathway to the ICC Cricket World Cup 2023. It started in August 2019 and will run till January 2022, with all matches played as ODIs. Each set of fixtures will take part as a tri-series in all seven countries participating in the league.

The top three teams at the end of the league will advance to the ICC Cricket World Cup Qualifier 2022 with four bottom teams moving to a play-off tournament, also taking place in 2022. 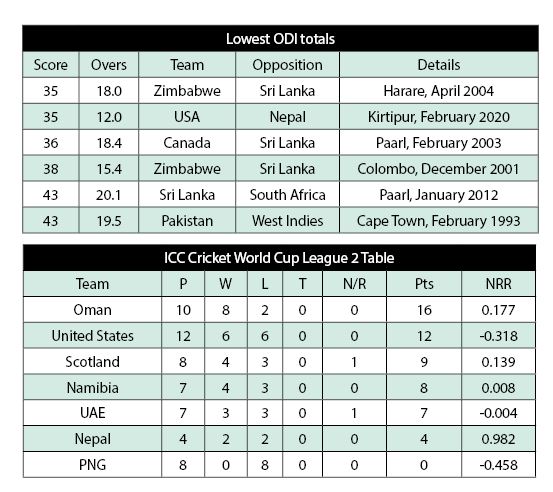 34 political parties and organizations to protest against MCC today

KATHMANDU, Feb 25: As many as 34 political parties and organizations are set to hold protests against the US-funded Millenium... Read More...