Economic Freedom of the World 2016 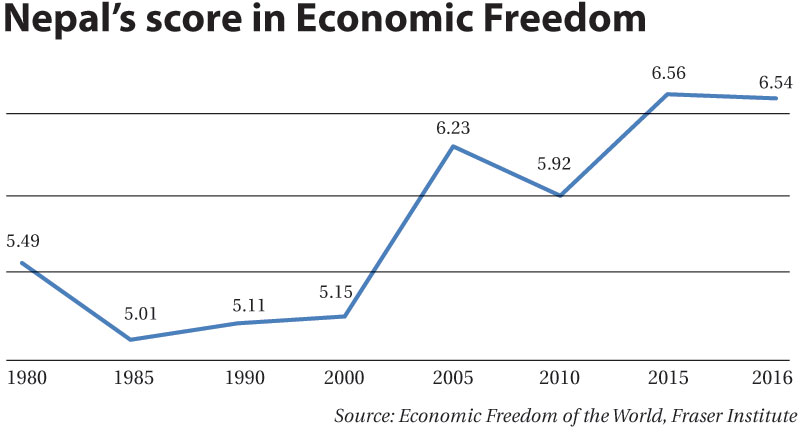 KATHMANDU, Sept 15: Nepal has ranked 108 out of 159 countries and territories included in the Economic Freedom of the World: 2016 Annual Report, released on Thursday by Samriddhi Foundation in conjunction with Canada's Fraser Institute.

Samriddhi Foundation is releasing the report in Nepal for the ninth consecutive year.
Last year, Nepal was at the 106th position with a score of 6.56.

With an overall score of 6.54 -- in a scale of 1 to 10 where a higher value indicates a higher level of economic freedom -- Nepal ranked 108th out of 159 jurisdictions in this year's index.

With this, Nepal has dropped two places down in the global ranking.

Likewise, Nepal's score in Access to Sound Money climbed to 6.43 from 6.42. Nepal also improved its score to 6.72 from 6.47 under Freedom to Trade Internationally.

Under Regulation of Credit, Labor and Business Component also, Nepal's score climbed to 6.87 from 6.85. However, overall score dropped to 6.54 this year from last year's 6.56, according to the report.

"Economic freedom leads to prosperity and a higher quality of life, while the lowest-ranked countries are usually burdened by oppressive regimes that limit the freedom and opportunity of their citizens,” said Fred McMahon, Dr Michael A Walker Research Chair in Economic Freedom with the Fraser Institute.

The Fraser Institute produces the annual Economic Freedom of the World Report in cooperation with the Economic Freedom Network -- a group of independent research and educational institutes in nearly 100 nations and territories.

The Economic Freedom of the World Report is world's premier measurement of economic freedom, measuring and ranking countries in five areas: size of government, legal structure and security of property rights, access to sound money, freedom to trade internationally, and regulation of credit, labor and business.