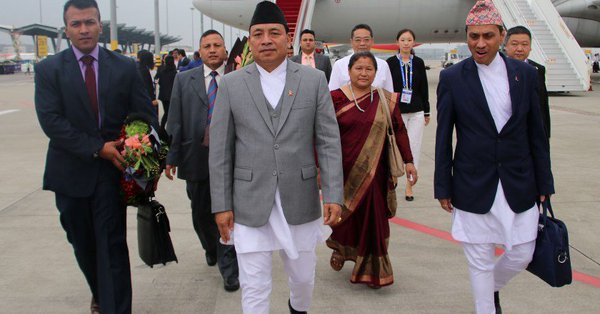 KATHMANDU, Sept 20: Vice President Nanda Bahadur Pun has expressed commitment that Nepal was committed to the One China Policy.

Addressing the 17th Western China International Fair and Ninth Western China International Cooperation Forum at Chengdu, China, today, the Vice President said Nepal was also committed not to allow any activities against China in Nepal's territory.
He said significant achievements are being made as new avenues of cooperation are being identified to further strengthen and widen relations between Nepal and China in recent years.

Vice President Pun added that agreements on transit transport, belt and road initiatives and rail project between the two countries were the significant.

He also welcomed the Chinese President's view of forming community having common future by increasing cooperation among concerned countries for humanity through BRI.
VP Pun further said that both the countries were committed to forward the cooperation in the broader structure of the Trans Himalayan Connectivity to expedite implementation of bilateral agreement related to BRI.

The sisterly relations established between Kathmandu and Chengdu city has further added new dimension in the relation between Nepal and Sichuan province, he added.

Saying the gate to peace, stability and prosperity has been opened in the country after three-tier of elections as per federal structure, the Vice President said achieving economic prosperity and goals of 'Prosperous Nepal, Happy Nepali' determined by the government was the top priority.

He also urged the investors of different countries and participating in the conference to invest in Nepal and take maximum benefits.

Vice President Pun said, "The existing laws and policies of Nepal are investment-friendly. Security of foreign investment has been fully guaranteed. I want to assure you that you will get many benefits investing in Nepal."

He also urged Chinese tourism entrepreneurs for the publicity of Visit Nepal-2020 among Chinese people.

The fair is organized since 2000 has been linking China as well as other participating countries in trade, investment, technology and tourism sectors. The fair has been providing opportunity for sharing of views, establishing relations and cooperation among businessmen, industrialists and investors. RSS

Netanyahu out, Bennett in as Israel marks end of an era
58 minutes ago