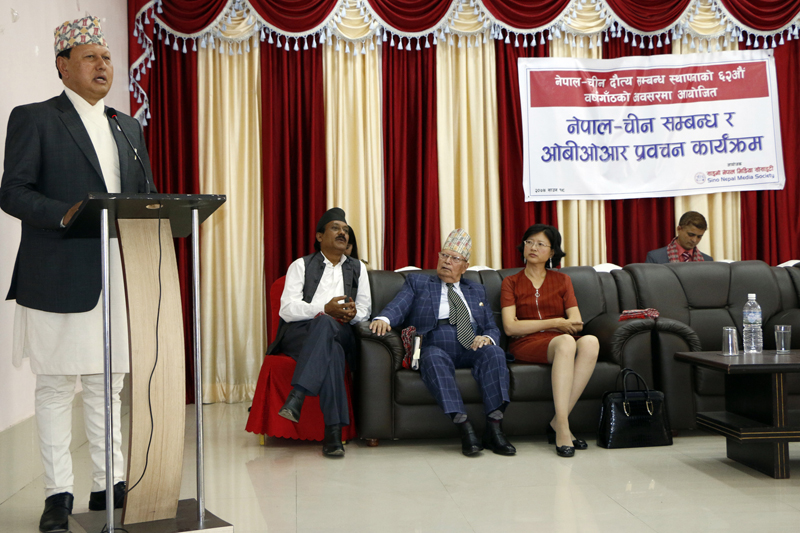 KATHMANDU, August 3: Minister for Information and Communications Mohan Bahadur Basnet has said Nepal is committed to the One-China policy.

In his address to a programme organised here today to commemorate the 62nd anniversary of the establishment of diplomatic ties between Nepal and China, the Minister said cultural, religious and economic relations existing between the two close neighbours were further getting consolidated. The programme was organised by the Sino Nepal Media Society.

He said, "The Nepal Government is always alert to the possibility of any anti-China activities from the Nepali territory." He went on to say that China's non-interference in Nepal's domestic affairs and it reaching the people's doorsteps at time of natural disasters was testimony that both neighbours had strong, friendly and cordial relations, expressing hope that people-to-people relations in both countries would be more cordial once the neighbours are connected through the remaining 11 transit points.

Also speaking on the occasion, lawmaker Rupa Maharjan stated that Nepal could take many benefits for China and India and it was always expected to serve as a bridge between the two countries. Nepal had already agreed to be a part of the One Road One Belt concept, a development initiative proposed by China.

China's Ambassador for Nepal, Yu Hong said Nepal and China had old and deep relations extended to the people's level. "The Chinese Government is always positive toward the development of Nepal," she said, recalling the Chinese assistance in the construction of some big projects in Nepal.