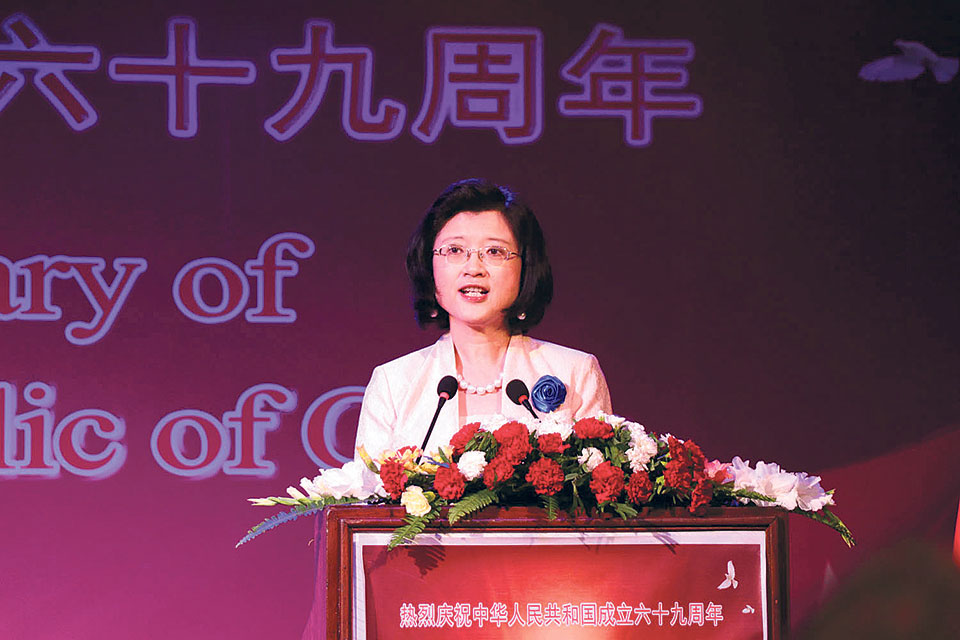 Chinese ambassador to Nepal Yu Hong addresses a reception organized in Kathmandu on Friday to mark the 69th anniversary of the founding of the People's Republic of China. Vice-president Nanda Bahadur Pun, ministers and senior officials had attended the function. | Photo: Rss

“Since the beginning of this year, the cooperation between the two countries has been further strengthened with the joint efforts of both sides,” she said while addressing the 69th National Day reception hosted by Chinese Embassy in Kathmandu on Friday. She said that frequent exchanges of high-level visits have helped further strengthen the relations.

The two sides signed a number of cooperation agreements including the Economic and Technical Cooperation Agreement, she added.

“Last month, the two side reached consensus on the Protocol of Transit Transport Agreement. Not long ago, we welcomed with pleasure two pairs of rhinoceros gifted to China by the government of Nepal and people of Nepal,” she said. “They are envoys of friendship from Nepal. I strongly believe that China-Nepal relations and cooperation will reach a new height with joint efforts of both sides.”

In pics: People celebrate Gaijatra in Sankhu
53 minutes ago