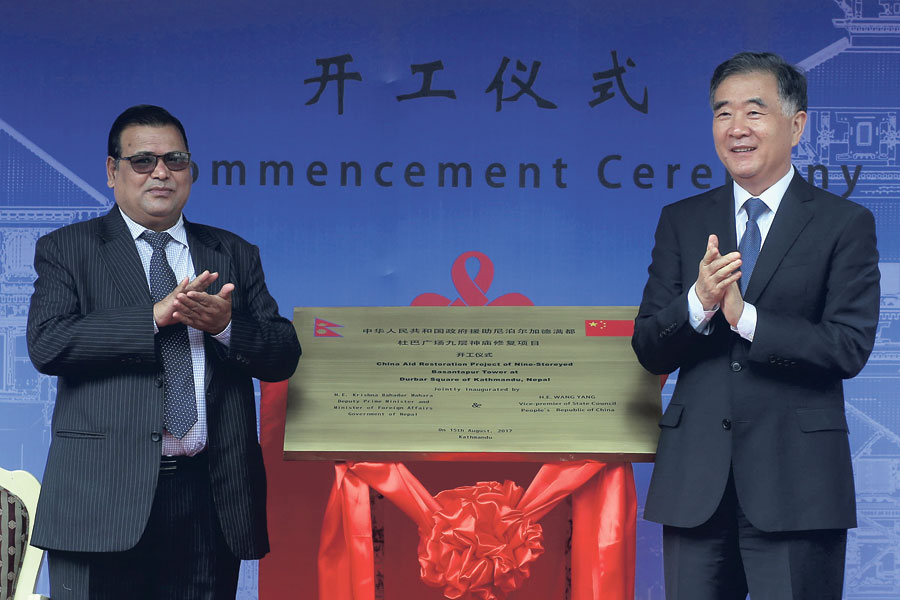 During the official meeting held between the two countries in Kathmandu on Tuesday in the presence of visiting Chinese Vice Premier Wang Yang and Deputy Prime Minister and Local Development Minister Bijaya Kumar Gachchhadar, Nepal and China signed Agreement on Economic and Technical Cooperation.

Under the Economic and Technical Cooperation agreement, China agreed to provide 1 billion RMB and technical cooperation for the restoration of earthquake-damaged infrastructures. The government plans to utilize the money to upgrade and repair Araniko Highway and construct bridge at Timure in Rasuwa district.

Separately, Nepal and China have reached Framework Agreement on Promotion of Investment and Economic Cooperation. This umbrella agreement seeks to bring in investment from the Chinese private sector in various areas of infrastructure development including in construction of road, tunnels and electricity transmission lines in Nepal.

Nepal and China have also exchanged letters on oil and gas resources exploration in Nepal as per the agreement reached during the visit by then Prime Minister K P Sharma Oli to China in 2016. China will provide Rs 2.25 billion for the purpose.

Minister Gachchhadar also appreciated Chinese assistance for Nepal’s socio-economic development. He expressed happiness that the bilateral cooperation between the two countries has been expanding in recent time to cover various important aspects.

According to a press statement issued by the Ministry of Foreign Affairs (MoFA), both sides agreed to enhance the functions and facilities at Nepal-China border port. “In the context of bilateral agreement signed today on utilization of reconstruction grant of the Chinese government in the restoration of border bridges and Tatopani port, Nepali side reiterated its request to the Chinese side for early opening of the Tatopani-Zhangmu border point,” said a MoFA statement.

Chinese government has announced 2017 as Nepal Tourism Promotion Year in China. The two countries have agreed for joint cooperation and collaboration in promoting Nepal’s tourism in China.

Visiting Chinese Vice Premier Wang made the announcement on Tuesday. During the bilateral meeting between the two countries, Wang also expressed condolences and sympathies to the victims of the floods and landslides in Nepal.

KATHMANDU, August 25: Management Association of Nepal (MAN) and the PHD Chamber of Commerce and Industry (PHDCCI) of India have... Read More...