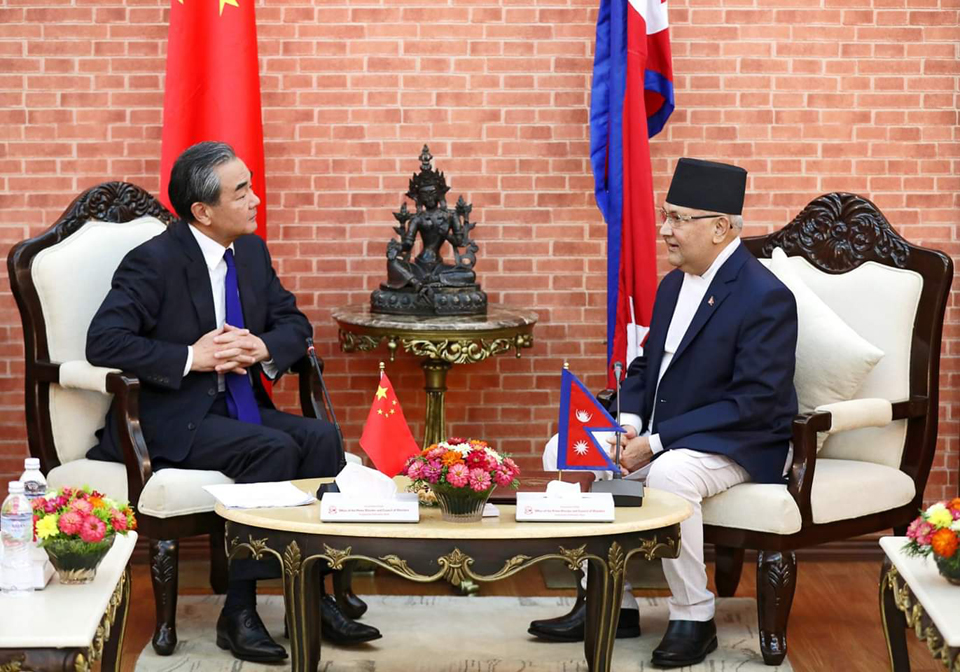 The agreements were signed and exchanged by Foreign Minister Pradeep Kumar Gyawali and his Chinese counterpart Wang during the delegation-level talks between the two countries on Monday.

The agreements signed between the two sides after the delegation-level talks include the Exchange of Letters on the Hospital Recovery Project in Manang and the Exchange of Letters on 5000 pieces of emergency shelter tents worth Rs 17 million. The state-of-the-art facility hospital in remote Manang district will be constructed with the Chinese grant assistance of Rs 356 million.

A separate MoU between the Ministry of Education, Science and Technology and the Embassy of the People's Republic of China on Volunteer Chinese Teachers' Program in Nepal was also signed on the occasion. The Chinese volunteer teachers will teach Chinese language in various schools in Nepal.

Officials at the Ministry of Foreign Affairs (MoFA) said the agreements are part of Rs 17 billion grant assistance announced earlier by China during President Bidya Devi Bhandari's visit to Beijing in April.

During the delegation-level talks, the two foreign ministers reviewed all important aspects of bilateral relations and expressed satisfaction over the expanding and deepening relations between Nepal and China in recent years. They also agreed to further promote co-operation in various areas of mutual interest, according to MoFA.

On the occasion, Minister Gyawali appreciated China's continued support for Nepal's socio-economic development and underlined the need of strengthening cooperation in the fields of connectivity, infrastructure, energy and education.

Minister Wang Yi arrived in Kathmandu on a three-day official visit to Nepal on Sunday evening. The visit is expected to lay the ground for the much-anticipated visit of Chinese President Xi Jinping to Nepal.

Nepal is expecting the visit of Chinese President Xi to Nepal in the course of his five-day state visit to India beginning from October 11. President Bhandari and Prime Minister KP Oli both briefed Minister Wang that Nepal has already completed all necessary preparations to welcome Chinese President Xi Jinping to Nepal, sources said.

Although both sides, according to MoFA statement, underscored the importance of the exchange of high-level visits on a regular basis in order to develop mutual trust and confidence, and to further strengthen bilateral relations, it is still not clear whether President Xi will be visiting Nepal during his India visit.