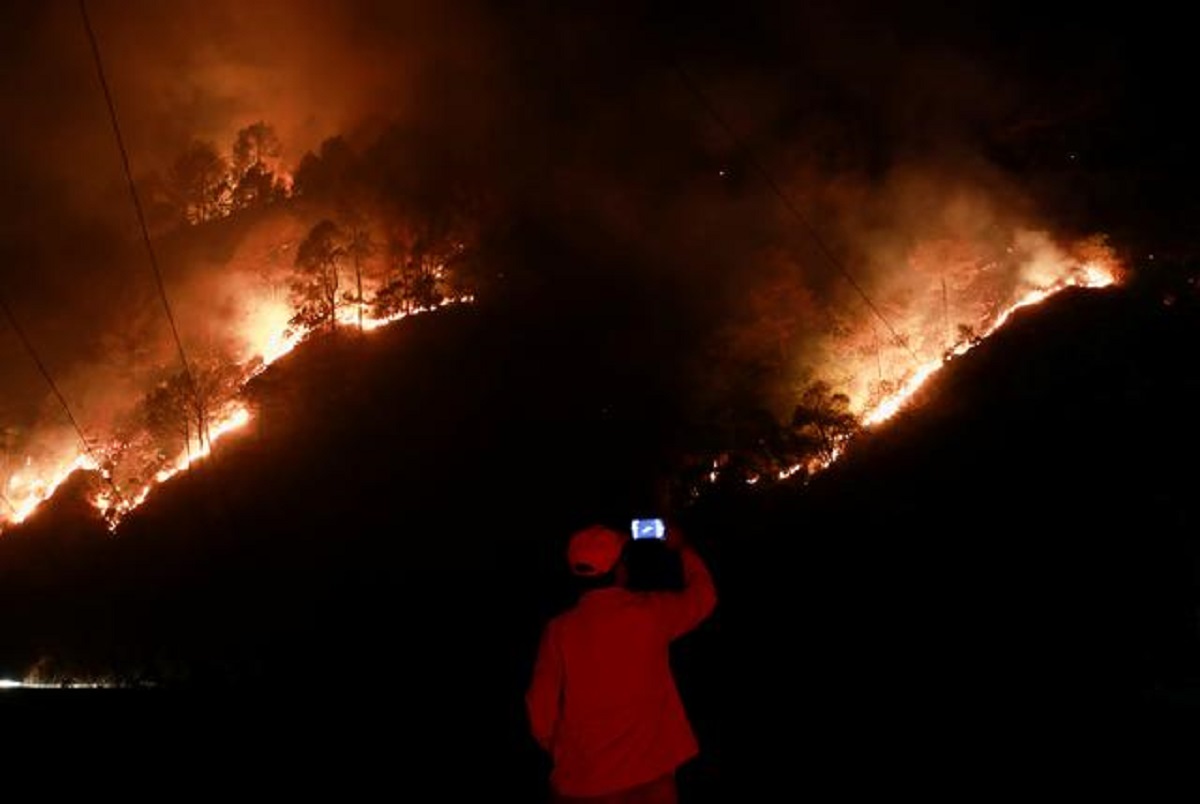 A man takes pictures from his phone during a forest fire in Makwanpur, outskirts of Kathmandu, as forest fires have raged many areas in Nepal contributing to worst air quality in the bowl shaped Kathmandu, Nepal April 8, 2021. REUTERS/Navesh Chitrakar

KATHMANDU, April 10: Nepal is battling its worst forest fires in years, officials said on Friday, with smoke wafting across its mountains and souring the air as it settles into the bowl that holds capital city Kathmandu.

Five people have died so far trying to put out the fires that have been raging since January, said Sundar Sharma, a senior official of the National Disaster Risk Reduction and Management Authority.

Wild fires were burning in at least 60 places across 22 of Nepal’s 77 administrative districts, he said, adding to the growing levels of pollution across the country that lies nestled between India and the Tibet region of China.

Details on losses from the fires are still being collected, Sharma said. This has been the worst fire season by number since 2012, when the government started keeping records.

“Forest fires are the main reason for the rising air pollution in Kathmandu and many other places,” Sharma told Reuters.

“Wild fires could hit the peak later this month if the ongoing dry spell continued,” he said.

Nepal ordered schools to close for four days at the end of March after air pollution climbed to hazardous levels, forcing millions of students to stay home.

Forest fires often erupt in Nepal during the January-May dry season, when villagers burn dry leaves in the woodlands to prompt fresh grass growth for their cattle.

Sharma said the number of fires this year were 15 times more than those occurring in 2020. He didn’t immediately have a reason for the increase.

In Makwanpur, 50 km (32 miles) south of Kathmandu, 46-year-old Tara Pakhrin watched the fires on a hill next to her home.

“The smoke blinded me and I could not see who started the fire,” she said.

The air quality index (AQI) in Kathmandu was at an unhealthy level of 174 on Friday, according to data published on iqair.com, a site that monitors air quality. An AQI level below 50 is considered good.

“The pollution levels have come down in many places but this is not adequate enough for healthy breathing,” said Indu Bikram Joshi, a spokesman for the Department of Environment.

Just over the border in India’s Uttarakhand state, forest fires have been burning since October, killing four people, the state government said.

In April alone, there have been 657 incidents of forest fires in Uttarakhand, a bulk of them in the state’s Garhwal region near to Nepal.