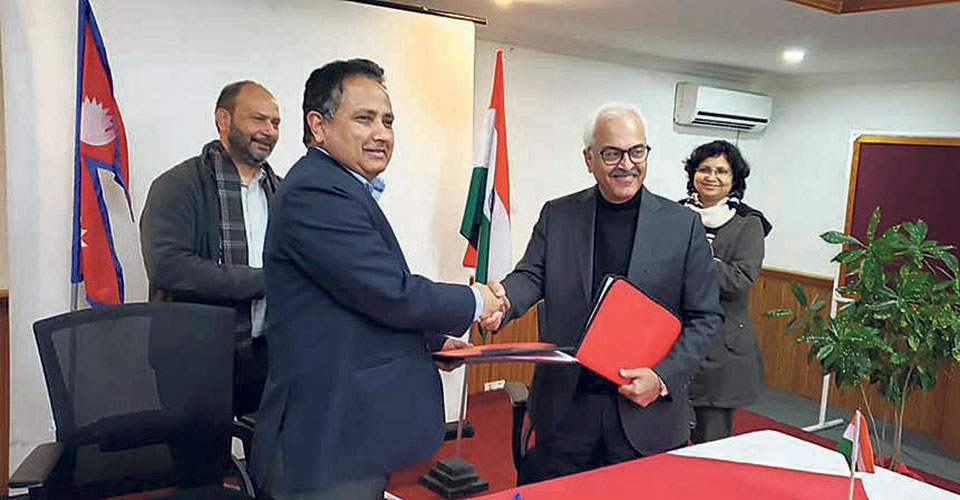 KATHMANDU, Jan 26: Nepal and India have agreed on energy banking, paving the way for selling surplus electricity and purchasing the same volume of energy when necessary.

According to government officials, the new mode of electricity exchange is beneficial for Nepal as it enables the country to bank energy by providing to India during wet season when there is surplus energy. Later the same amount of energy can be received when necessary.

Nepal, which faced acute energy crisis till 2016, is set to have surplus energy during wet months. But the deficit in dry months continues even after the completion of Upper Tamakoshi Hydropower Project.
The government of India has also agreed to allow Nepal’s designated entity to enter into India’s Power Exchange Market for trading electricity.

These were the major achievements of a bilateral meeting held in Pokhara on Wednesday and Thursday.
The government secretary-level joint steering committee (JSC) meeting endorsed the proposal put forth by the joint working group, another body under STC. Energy Secretary of Nepal Dinesh Kumar Ghimire and his Indian counterpart A K Bhalla represented their respective governments.

Spokesperson at the Ministry of Energy Pravin Raj Aryal said that the energy banking would also allow Nepal to participate in India’s power exchange market, which is a forward looking move in bilateral energy exchange.

The agreement is an extension of the Power Trade Agreement that Nepal and India signed in 2014.
“We have to work on exchange modality, secured synchronizations of grid connectivity, and also agree on commercial terms before materializing these things,” added Aryal.

Nepal’s electricity supply system is small compared to India’s massive supply system. Technicians say much preparation is needed on synchronization before the concept of energy banking could be materialized.
Currently, Nepal’s energy flow is only one way: the country imports via different cross-border transmission lines, and the import is done without synchronization.

Aryal said Nepal needed a loop with India in grid connection to protect possible supply failure or blackout, and have stable energy supply if one of the connectivity lines failed to work.

The Government of Nepal is building a mega cross-border transmission line connecting Butwal with Gorakhpur under grant assistance from the US Government.

This will be an important step for energy exchange, Aryal said. He, however, could not specify possible deadline to start energy banking and electricity exchange.

The committee meeting also reviewed other issues of bilateral works and projects.

Currently, Mujaffarpur-Dhalkebar Transmission Line is being upgraded to 400 kilovolt from 220 kilovolt. This upgrading work allows both import and export of up to 600 MW from the current capacity of 290 MW.

Work together to sort out water issues

One of the grievances of people living in Tarai plains along the Indian border has been that dams and structures... Read More...