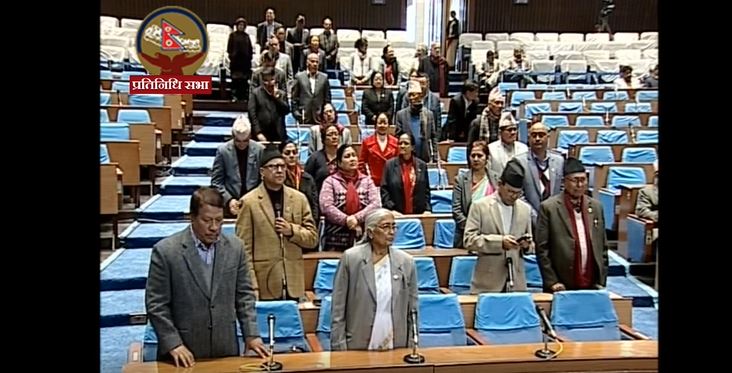 KATHMANDU, Feb 9: The main opposition party Nepali Congress obstructed the meeting of the House of Representatives (HoR) for the third time on Sunday.

The meeting was called for 1 pm on Sunday, however, got obstructed when Congress lawmakers protested by rising from their seats. Amid the protest, NC lawmaker Dilendra Badu took the mike to speak.  However, the speaker refused to turn on his mike thus barring him to speak at the House.

Following the protest by Congress MPs, speaker Sapkota urged them to facilitate him in conducting the house proceedings smoothly. He also added that the parliament can do nothing against any decision taken by a constitutional organ like the CIAA. "Besides, the issue is under consideration at the Special Court," he added.

Subsequently, the speaker said the House was posponed to 1 pm on Tuesday. Main opposition NC has been obstructing the parliament meeting for the third time as of today following the registration of a case by the anti-graft body Commission for Investigation of Abuse of Authority (CIAA) against 175 including then Deputy Prime Minister Bijaya Kumar Gachchhadar claiming their involvement in Lalita Niwas land scam. NC has been claiming that CIAA had made a discriminatory decision regarding the issue.

KATHMANDU, Nov 20: The leftist government of Prime Minister KP Oli is pushing the country toward another cycle of conflict,... Read More...

Former Nepali envoy to Pakistan no more
18 hours ago