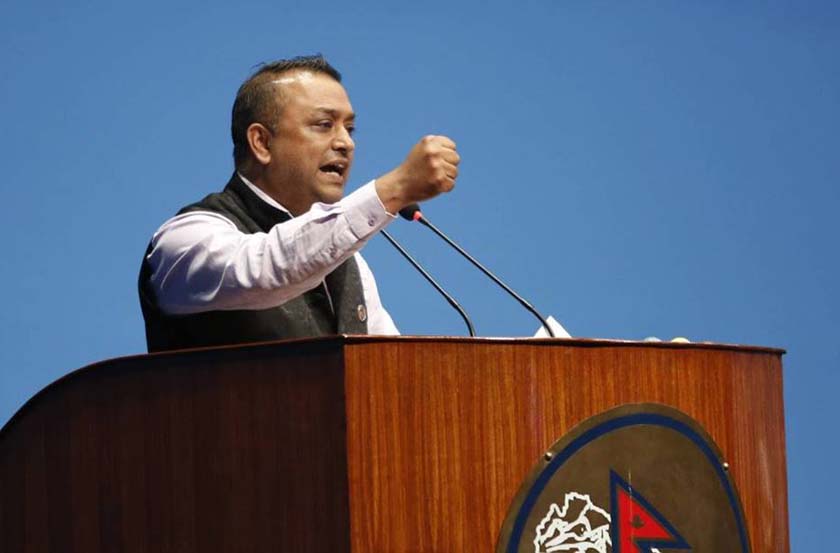 “You are not supposed to make false claims at such programs where you are never questioned.”

KATHMANDU, April 8: Lawmaker of the main opposition Nepali Congress (NC) Gagan Thapa on Thursday challenged Prime Minister KP Sharma Oli to hold a debate about the status of the country’s infrastructure development based on the statistics.

Addressing a meeting of the House of Representatives (HoR), lawmaker Thapa, who also served as a minister under the Pushpa Kamal Dahal-led cabinet, invited Prime Minister Oli to face parliament and hold debate based on facts and figures.

“You are not supposed to make false claims at such programs where you are never questioned. I challenge you to face the House and debate on facts,” Thapa said. He also argued that the prime minister is either telling a lie or ignorant about the existing state of affairs.

On the occasion, Thapa said that the prime minister is busy these days at inauguration and foundation stone laying ceremonies rather than giving priority to complete the ongoing national pride projects. “Nobody talks about the ongoing national pride projects including Upper Tamakoshi Hydropower Project and Fast Track, which have remained incomplete and neglected for years. But all including the PM are in a race to take credit for the projects that have been completed after more than two decades,” said Thapa.

Thapa added that all the political parties that took the helm of government since the commencement of the Melamchi Drinking Water Project in 1998 should apologize to the residents of the Kathmandu Valley for their failure to complete the project within the stipulated time frame.

Referring to the recent inauguration of 165 strategic roads across the country by PM Oli, Thapa criticized the incumbent government for haphazardly announcing the projects without detailed feasibility study and arrangement of necessary financial resources.