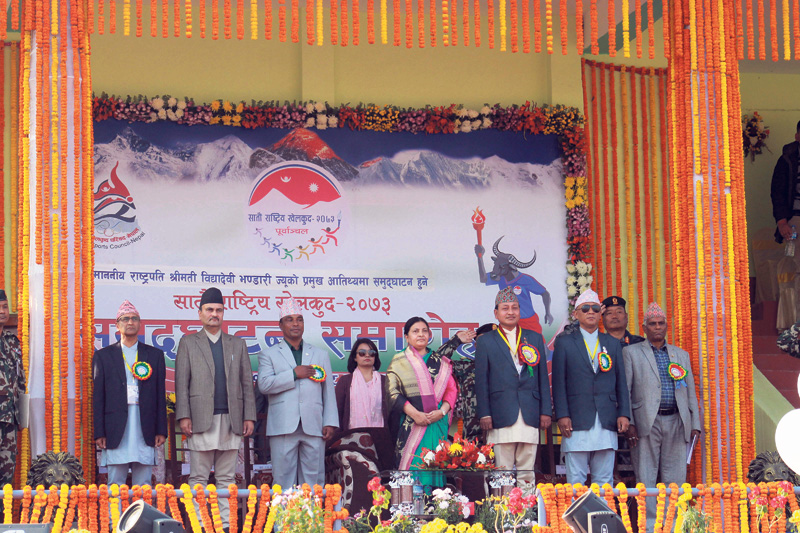 President Bidyadevi Bhandari (4th R) and other dignitaries during the opening ceremony of the  Seventh National Games in Biratnagar on Friday.Photos: Chuman Basnet/Republica

BIRATNAGAR, Dec 24: The seventh edition of National Games formally kicked off on Friday after President Bidyadevi Bhandari announced the opening of the games from Shahid Stadium of Biratnagar.

The event to feature 35 games will see participation of 4029 players for 328 gold and silver medals each and 481 bronze medals. Addressing the mismanaged inauguration ceremony, President Bhandari said, “Now I declare the opening of the Seventh National Games and wish for its grand success.”

She also stressed on the need of ensuring the players’ livelihood and improved infrastructures. “It is the need of the time to introduce country at the international level through sports,” she said.

Minister for Youth and Sports Daljit Sripali hoisted the flag of the Games. He read out the message of Prime Minister Pushpa Kamal Dahal and said that the government has given sports a top priority.

National Sports Council Member Secretary Keshav Kumar Bista said that the Eastern Region was hosting the National Games for the first time and that it was a matter of pride for the region. “National Games is the biggest festival for players to exhibit their talents and create a base for success in the international arena,” Bista said.

Shooting player Tikaram Shrestha and boxing judge Anup Lama took oath on behalf of all the players and referees during the inauguration ceremony that featured cultural and traditional demonstration of the Eastern Region.

Earlier, the National Games was postponed for four times on various reasons and even the current edition of games was in doubt if it would be organized on time. The seventh edition was supposed to be held on 2013. The last edition of the Games was held in 2011 in Far Western Region. Kiran Rai, then President of the Eastern Regional Sports Development Committee, had received the flag making a commitment of holding the seventh edition after two years during the closing ceremony of the Sixth National Games. However, it was postponed for four times owing to various reasons including the Terai protests.

The Seventh National Games has also included three different events which were held 15 months ago. Swimming, bodybuilding and triathlon were held in October and November last year in Kathmandu as the National Games was scheduled in November-December in the same year.

The games that are taking place in six districts of Eastern Region, besides Kathmandu, Lalitpur and Kaski will run for eight days. The closing ceremony will be held at Dharan Stadium on December 30.

Former Olympian Narendra Poma of Dharan who represented Nepal in Moscow Olympics in 1980 lit the Olympic light during opening ceremony of the Games on Friday.

Narendra lit the torch after the Olympic torch brought from Dhangadhi was moved around the stadium thrice by the 17 players including seven former Olympians hailing from Eastern Region. The gold medalists in South Asian Games (SAG) from Eastern Region also joined Narendra on lighting the torch.

The Olympic torch had arrived to Biratnagar on Monday from Dhangadhi where the sixth edition of National Games was held.

The opening ceremony of the National Games turned tensed after it was boycotted by representatives of Nepali Congress Morang chapter blaming that the National Sports Council (NSC) led by CPN-UML carried out all activities unilaterally. The opening ceremony graced by President Bhandari witnessed heated arguments between the rival sides after sportspersons belonging to Nepali Congress started shouting expressing dissatisfaction over participation of Jeevan Ram Shrestha, the president of Nepal Olympic Committee. Shrestha’s committee has international recognition while it is not recognized by the country’s authority.

NSC Treasurer Surendra Hamal led the protesting group saying that the participation of the NOC president, declared illegal by Supreme Court, in the program attended by President was wrong. The security personnel deployed there had stopped Hamal, Nepal Democratic Sports Federation (NDSF)’s President Devendra Serchan and All Nepal Football Association (ANFA)’s Vice-president Kishor Rai among others when they tried to climb to the dias.