Narayanhiti Palace Museum bustles with visitors after display of crown 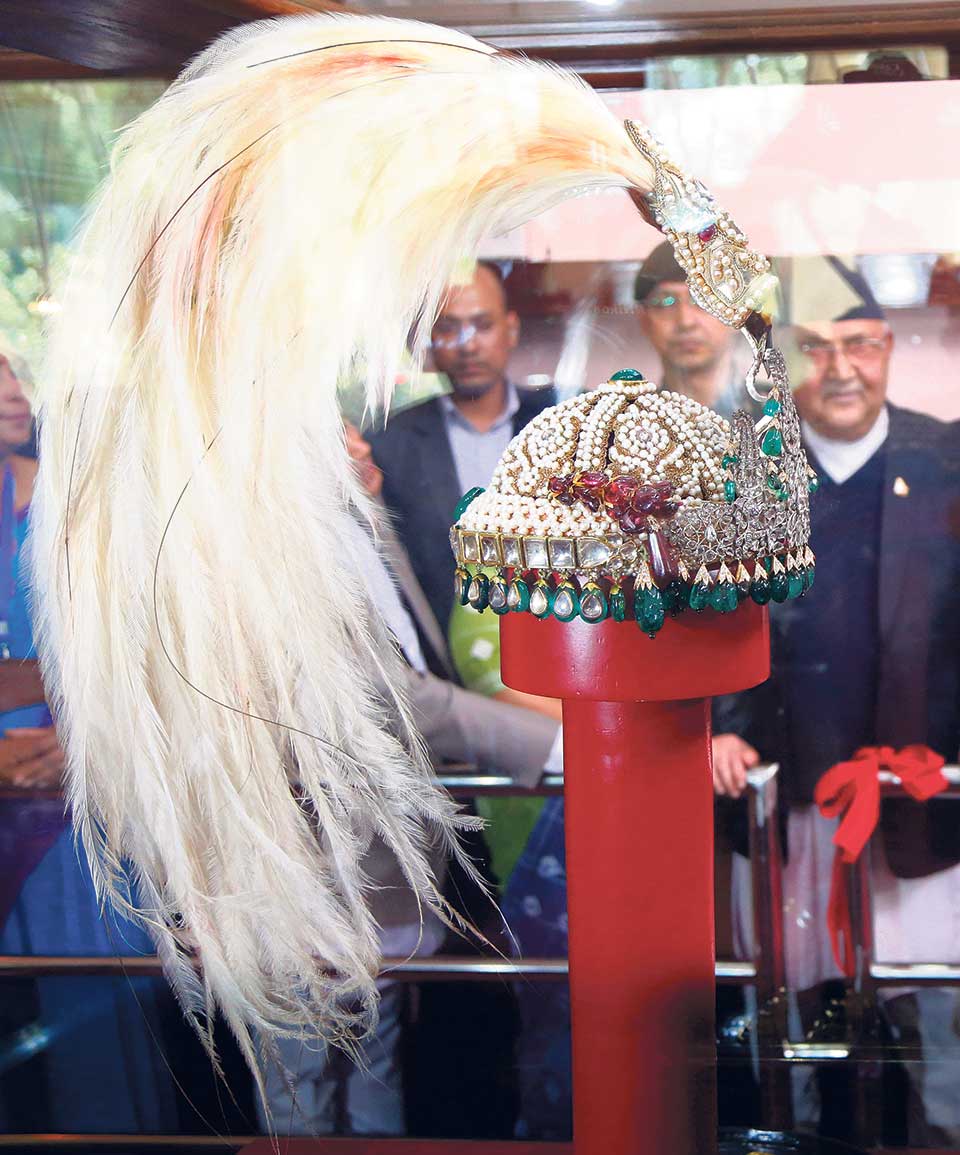 KATHMANDU, Oct 30: One week into the public display of the royal crown and scepter, Narayanhiti Palace Museum bustles with visitors. Not just the locals, but even foreigners are seen flocking the palace to get a glimpse of the priceless artifacts which are displayed inside a bullet-proof showcase in Rupandehi Hall.

According to Raju Karki, a non-gazetted official at the museum, the crown put in display is the same one worn by the late king Prithvi Narayan Shah, Nepal’s unifier. It was last modified during late king Birendra’s reign and is made up of precious stones like diamonds, pearls, emeralds, and rubies.

The ambiance at the museum was a mixture of emotions.

The museum has witnessed an increase in the number of visitors by 50 percent after the display of the crown. Museum officials predict that the royal crown will lure more visitors after Tihar.

While some visitors were glad to have been finally granted the opportunity to see the crown with their own eyes, there was a slight hint of disappointment and sadness in the air at having lost their monarch. Others, however, expressed happiness in confining monarchy to history books.

Eighty-year-old Tika Devi Amgain from Kailali expressed remorse for having to see the crown in the absence of the monarch. The display made her reflect back to the 240-year-old regime of the Shah dynasty.

Rama Acharya expressed mixed feelings. While she expressed happiness for finally being able to get a chance to see the crown with her bare eyes, Acharya said, “The crown is better suited on a king’s head rather than being locked away in an empty glass box.”

Eighty-year-old Prabhakhar Joshi said that even though monarchy has been abolished, he would make sure to bow down before the crown as an alternative way of showing respect to monarchy. Kings were once regarded as incarnation of Lord Vishnu, and the belief continues to hold strong among some over a decade since the abolition of monarchy.

The royal crown, which symbolizes the significance of monarchy, used to be worn only on special occasions. According to Shiva Ram KC, another museum official, the crown was worn by the Shah kings only on four occasions—when the king ascended the throne, during the coronation ceremony, kanyadaan (wedding ceremony) of the king’s daughter and welcoming new members in the royal family.

Along with displaying the royal crown and scepter, a separate glass case also contains the royal ‘kalash’, ‘mace’, and ‘aasha’. While the ‘mace’ is a highly ornamented ceremonial staff carried before the monarch as he entered the National Assembly or Constituent Assembly, the ‘aasha’ is a pair of silver structures held by sentries at the entrance during special events.

The 240-year-old monarchy was abolished in Nepal on May 28, 2008, by the first meeting of the Constituent Assembly following the success of the People’s Movement II in 2006. The crown, locked in Dhaulagiri Hall for over a decade, was shifted to Rupandehi Hall where it has been kept for public display. The crown is surrounded by 18mm thick bullet-proof glass while the showcase itself is made up of 16mm thick glass. CCTV cameras surround the room from all directions and the room is under strict surveillance of Nepal Army personnel round the clock.

Royal crown to be exhibited today

KATHMANDU, Oct 15: Ten years after declaring Nepal as a federal republic, the government is all set for public display of... Read More...

CHITWAN, May 14: Amid high flow of VIP and VVIPs, lack of security measures at Bharatpur Airport has been a matter... Read More...