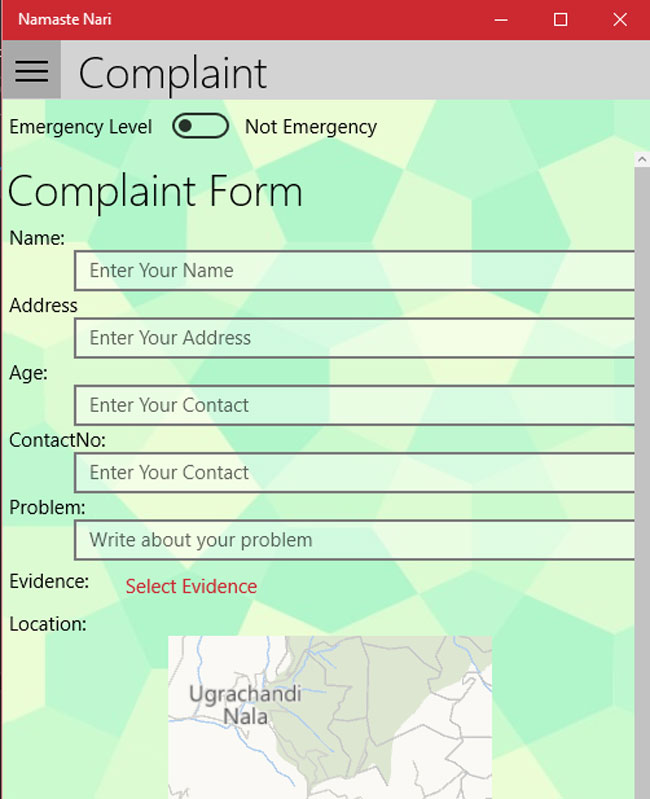 According to the UN, one in three women is victimized every day, and one in five women will become a victim of rape or attempted rape in her lifetime, according to World Health Organization. Women are considered to stay silent, even when they have to endure rape and violence. A group of app developers from Echo Innovators came up with ‘Namaste Nari’, an app to empower, educate, protect and help every woman.

INFORMATION
The most important thing is that women need to know what their human rights are. The app has all the national and international laws and rights that have been stated for women. It will have those rights even in voice command so that everyone can understand them.

NEWSFEED
The app has success and failure stories of women and keeps the information about national and international organization working for women rights and updates the users about different job opportunities for women.

ACTION
This is one of the main major features of the app. In the case of emergency you can push the power button twice. Alert message will be send with your GPS location to the nearest police station. You can also shake your phone so that the camera will turn on and start recording. This recording will be saved in the app’s database. The app also informs if you enter a high crime rate area.

FORM
According to a study by WHO conducted in 2005, 55- 95% of women who had been physically abused by their partners had never contacted the police, NGOs or shelters for help. Stigma and fear prevent women from seeking assistance. It has forms for every victim to complain about their problems. If they have photos, videos or any kinds of documents then they can attach it with that form as evidence. This form directly goes to the authorized agencies so that they could collect the feedback and also take needed action.

TUTORIAL
Tutorials related to health, education, sanitation and safety are also available in the app.

FEEDBACK
The app has a feedback panel so that the developers can take suggested ideas from the users and change the app accordingly.

Rekha is an undergraduate student of Bachelors in Information Technology at TU.