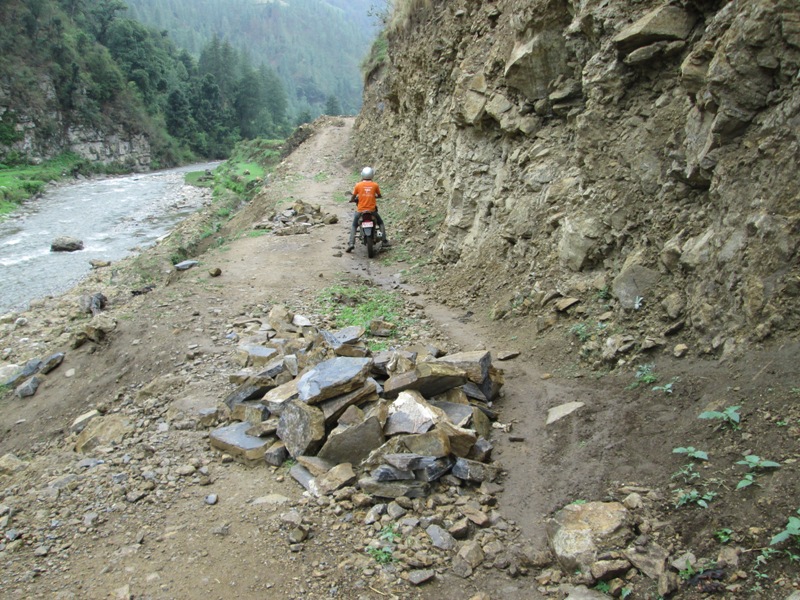 JUMLA, Aug 22: The Nagma-Gamgadhi road section of the Karnali highway has been blocked for the past two months due to heavy rainfall. The incessant rainfall has caused landslides and huge potholes have been formed on various sections of the road.

The VDCs near the district headquarters have seen an acute shortage of daily commodities. The road sections including Bajgada, Koirali, Chulelgaun, Baragidanda, Botamalika and Ghucchi Lekh of Mugu have been obstructed. Similarly various roads nearby Pina, Jhyari Khola, Topla Gaun, Maithudanda and Jumli Temple in the Mugu district have been blocked, says Nripendra Bahadur Malla, general secretary of Mugu Chamber of Commerce and Industry.

The shops in the Gamgadhi market do not have sufficient goods to supply for the local people. There is a scarcity of basic commodities such as sugar, edible oil, rice, pulses, beverages, noodles, biscuits and monsoon tools like umbrellas, tents, shoes and so on.

CHITWAN, Aug 13: Traffic along the Narayangadh-Muglin and Muglin –Naubise road sections has been obstructed from Saturday afternoon due to... Read More...

IPO of CEDB Hydropower allotted, lucky 234,195 investors get 10 units each
20 hours ago

India reports daily rise in coronavirus cases of 343,144
23 hours ago