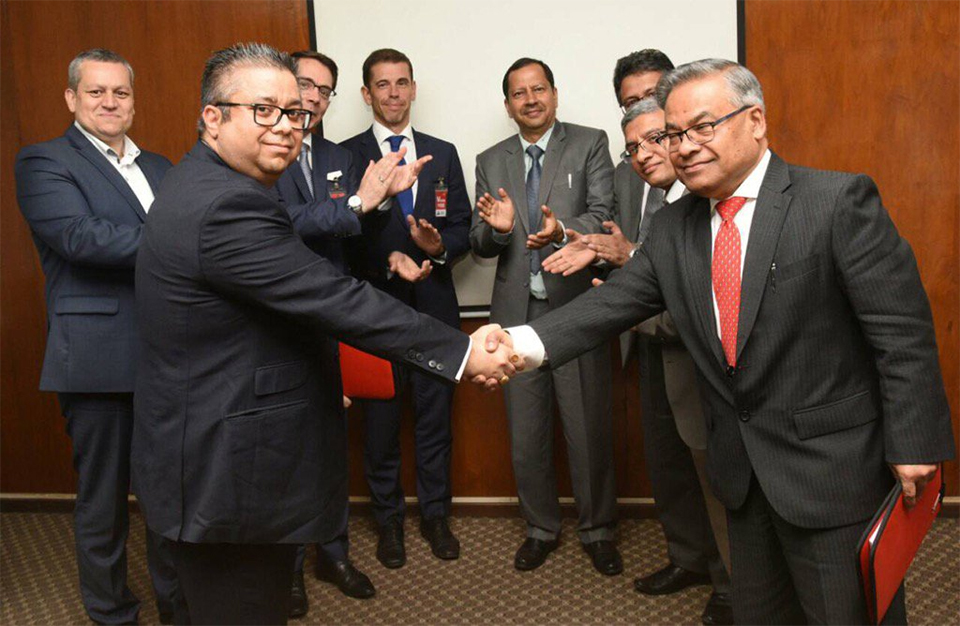 KATHMANDU, April 7: Nepal Airlines on Friday signed a final deal to purchase two Airbus passenger jets, in what is the largest-ever such deal in Nepal's aviation history.

Nepal Airlines Corporation (NAC) General Manager Sugat Ratna Kansakar signed the deal with Deepak Sharma,  representative of  AAR Corp, the supplier firm,  for purchasing two wide-body jets in the A330-200 series, at a price of US $209.6 million, according to a press release issued by NAC after the signing. AAR Corp is a US-based Company.

NAC agreed to release 35 percent of the price immediately after the deal, as part of a first installment  payment. Following the deal, the national flag carrier will have a total of five long-range planes in its fleet by March 2018, enabling it to serve new destinations such as in South Korea, Japan, Australia and Saudi Arabia. The number of seats in the new jets will  range from 250 to 280, according to NAC.

NAC currently has one Boeing 757-200 and two narrow-body Airbuses, and  flies to eight destinations.

NAC sent US $ 1 million to the company as a commitment fee in January. “The new jets will make Nepal a cheaper destination as wide-body aircraft can mean relatively cheaper airfares,” GM Kansakar told a gathering after the deal. The government is standing guarantor for the new aircraft purchase, which is aimed at promoting tourism.

Procurement process for the wide-body jets started in September. Proposals were invited from aircraft manufacturers, airlines, aircraft leasing companies and bankers and the US company was picked  out of 10 international companies.

The Employees Provident Fund has already committed a loan of Rs 25 billion for the Airbus purchase. But the final deal on financing is yet to be concluded as they still have to agree to  amicable interest rates. NAC has already borrowed Rs 10 billion while purchasing two Airbuses  with 158 seats in 2013, at an interest rate of 12 percent.

The purchase process for those jets  started in 2009 but corruption allegations arose at the very beginning when NAC forwarded the commitment amount. Kansakar, in his first tenure as GM, was accused of breaching procurement regulations. He was arrested by the Commission for Investigation of Abuse of Authority (CIAA) and later charge-sheeted at the Special Court, demanding a 10-year jail term. |The Supreme Court  subsequently gave him a clean chit.

The CIAA had accused Kansakar of violating procurement regulations in  sending US $ 750,000 as a commitment amount, but Airbus  returned the lock-up money after Kansakar and five other NAC staff were charge-sheeted.

KATHMANDU, April 7: Nepal Airlines on Friday signed a final deal to purchase two Airbus passenger jets, in what is the... Read More...

Nepal inks deal with US agency for $500 m grant

KATHMANDU, July 2: Nepal and the US government have agreed to instal a mega electricity transmission line and carry out maintenance... Read More...

Foreigners to be allowed to buy apartments in Nepal