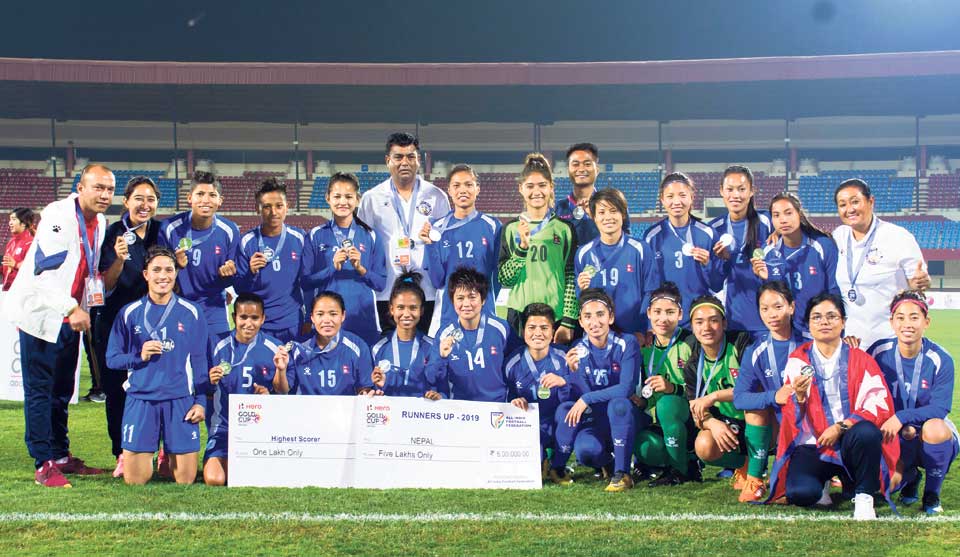 Members of Nepal national women’s team pose for a group photo with their medals after finishing runner-up at the end of their Hero Women’s Gold Cup final football match against Myanmar at the Kalinga Stadium in Odisha, India on Friday. Photo Courtesy: ANFA

KATHMANDU, Feb 16: Nepal national women’s football team suffered a humbling 3-1 defeat at the hands of Myanmar in the final of the Hero Women’s Gold Cup in Odisha, India on Friday.

In the summit clash at the Kalinga Stadium, a brace from Yee Yee Oo and a strike from Win Theingi Tun helped Myanmar win the match, despite Manjali Kumari Yonjan hitting a superb volley to equalize for Nepal before the second half.

Nepal started the game with attacking flow, and pressed the opponent superbly. Myanmar tried to attack from the flanks, but could not find a breakthrough in the first half an hour.

Myanmar was better than Nepal in all aspects of the game and took the lead in the 34th minute as Oo got a cut back in the Nepali danger box, and punished the poor defense line with a wonderful finish to the bottom corner.

Nepali team started playing attacking football after conceding the goal and Yonjan replied a goal back for Nepal with a sumptuous finish. She received a flick from Sabitra Bhandari inside the Myanmar box, and scored a superb volley giving the Myanmar keeper no chance to save the ball just at the stroke of half time.

Tun restored Myanmar’s lead in the 53rd minute, and Oo completed her brace 10 minutes later.  Oo hit a shot from near the edge of the box and Nepal keeper Anjila Tumbapo could not stop her shot.

Despite trying to get back in the game with a little hold of the possession, Nepal could not get a goal back.

Nepal had other chances to score, but could not convert them. Dipa Rai hit a long free-kick in the 32nd minute, but the ball grazed over the bar.

Myanmar created some other chances to add to its tally, but missed too. With Nepali defending well in the earlier stage, Myanmar could not add a goal or two more.

Nepal, who is preparing for the SAFF Championship and the Olympic Qualifiers, performed better than the expectations beating higher ranked teams like India and Iran.

Nepal lost the first match of the group stage against Myanmar 3-0. But, it bounced back superbly winning the last two matches against India and Iran to finish second and reach the final.

It recorded a historical win over India 2-1 and defeated Iran 3-0 to reach the final.

Myanmar, Nepal set up first ever Chamber of Commerce to promote investments

KATHMANDU, Nov 22:  Myanmar and Nepal have set up the first ever Chamber of Commerce established in Yangon since the... Read More...

Is Nepal prepared to deal with floods in light of COVID-19?
20 hours ago

Only two electric vehicles got customs clearance on May 27: Customs Department
21 hours ago

PHOTOS: 26 Nepalis arrive at TIA from Myanmar
18 hours ago

PHOTOS: 169 Nepalis arrive at TIA from UAE
11 hours ago

PHOTOS: 169 Nepalis arrive at TIA from UAE
11 hours ago

India set to reopen temples, malls but no sprinkling of holy water
13 hours ago

PHOTOS: 26 Nepalis arrive at TIA from Myanmar
18 hours ago