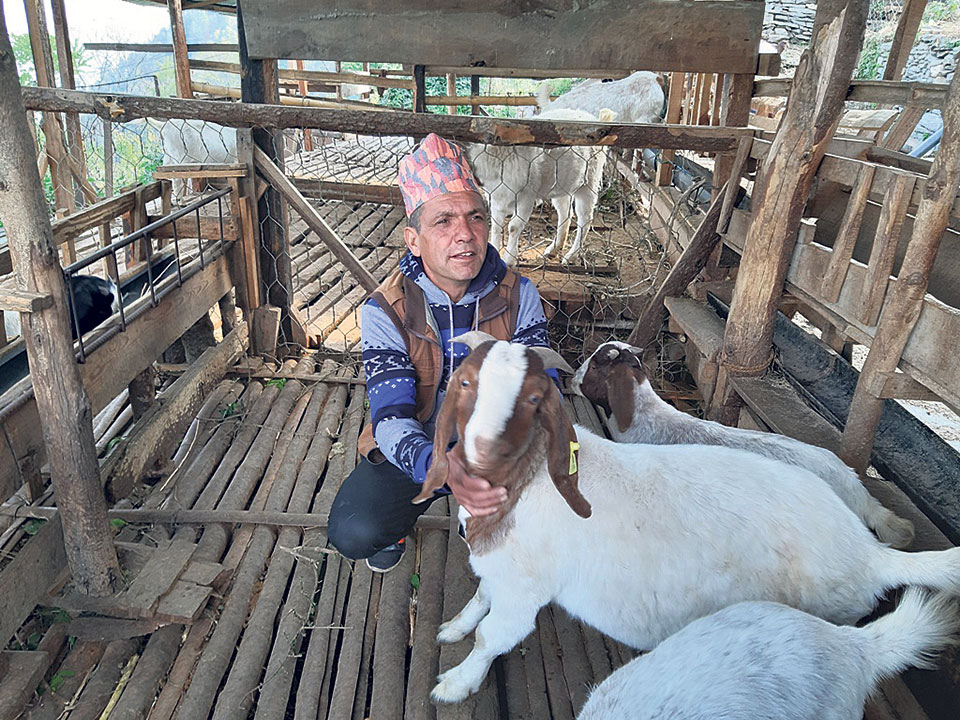 MYAGDI, Feb 12: Ananda Rijal of Toripani in Beni Municipality-9 of Myagdi district has been earning Rs 2 million annually after he ventured into commercial goat farming.

Rijal, who was working as a supervisor at a business firm in Kathmandu, started goat farming six years ago. Though the first year was not encouraging, as all his goats died, he did not give up farming. He has been making good profit in recent years.

"I had decided to give up farming when all my goats died in the first year. But I felt I should continue. I made a good decision," he added.

Rijal is the proprietor of Dhaulagiri Commercial Model Boer Goat Farm. He has kept Boer breed of goats, which grows comparatively faster than other breeds, in his farm. At present, he has 19 goats.

He feels happy to share his experience with other farmers and traders who come to his farm.

He has also planted different species of fodder grass in his farm. "I have planted fodder grass like Super Napier," he added.

Bel Bahadur Katwal, chairperson of Ward 9 of Beni Municipality, said Rijal's success has encouraged many people in the ward to take up goat farming. "The municipality has taken a policy of providing subsidy to interested farmers," he added.

Many overseas returnees have started goat farming in Myagdi, according to Katwal.

MYAGDI, Sept 15: Banking industry in Myagdi is confronting the problem of multiple banking, thanks to unhealthy competition among bank and... Read More...