Negligence in the health sector 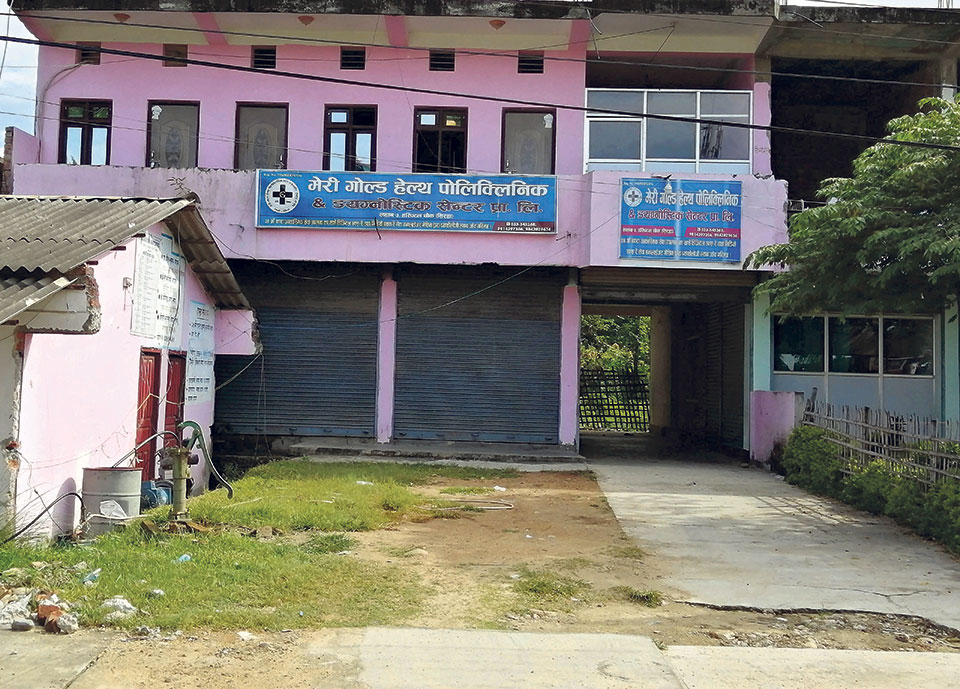 LAHAN, Aug14: Shova Devi Chaudhari of Roghapur village of Mirchaiya Municipality–3 started having labor pain on Sunday morning. Though there was a hospital in Mirchiya itself, Chaudhari’s family wanted to take her to a better health facility. An ambulance was called, and she was taken to a private clinic of Sunita Shrestha, a nursing superintendent. Shrestha was delivering for the fourth time. She already had three daughters and the family was expecting a son. In her earlier three cases, Chaudhari had consulted Shrestha only, which was the reason she trusted her. Shrestha, however, took Chaudhari to a clinic next door. It read Marigold Health Polyclinic and Diagnostic Center, close to it was a government-run Rau Smarak Hospital. Shrestha insisted that the polyclinic is best in the town, recounted Shova’s kin, Lalsa Chaudhari. “It has the best equipment and staffs. I can give you best service,” Lalsa quoted Shrestha as saying.

Things then did not go smooth. Lalsa felt that it was taking a lot of time for the delivery of the baby. She got worried, but staffs and Shrestha were not providing any information to her about Shova. “I even asked them if I should take her to some other clinic or hospital. But they convinced me that everything is fine and there is no reason to worry. They even told that I could take her away if I have a lot of money to waste,” Lalsa reported.

On Sunday night Lalsa saw Chaudhari was shifted to another ward. She followed her, but the clinic’s staff and Shrestha did not allow her to see her. But soon she saw that the whole team was in tension. They were rushing here and there and looked restless. When she asked them why they looked so worried, she was informed that they could not save Sabita’s baby. They reported that even the mother’s condition was critical.

“They told me that the umbilical cord was wrapped around baby’s neck. It died when they used the machine to deliver the baby” Lalsa reported them as saying. “And that affected even the mother. She suffered from excess bleeding,” she added, quoting the health facility’s officials.

The incident has left the family devastated. They have reported the matter to the police. They have accused Shrestha of taking them to an inadequate health facility by taking advantage of their ignorance.

With the help of DSP Bhesraj Rijal, Chaudhari has been taken to Nobel Hospital of Biratnagar for further treatment. According to Lalsa, Chaudhari was admitted at the hospital on the very night. Lalsa that the doctors have said they would try their best to save her life but noted that she remained in a critical condition.

Following the incident, it has come to the fore that Marigold Health Polyclinic and Diagnostic Center does not have permission to provide maternal health-related services. According to District Health Chief, Dr Nagendra Prasad Yadav, the clinic was providing illegal services.

Manisha Yadav of Bhagawanpur Rural Municipality had pain in her lower abdomen on January 25. She was taken to a hospital in Lahan that belongs to Ramkumar Sarada Umaprasad Murar (popularly known as RAU hospital). She was expecting baby for the first time and had regular checkups at the same hospital.

She had come to this hospital even two days earlier, on January 23, for the same pain. She had reached the hospital very early morning, and around 10 am Dr Shushila Singh recommended her to the nearby Shreya Polyclinic.

“Dr Shushila told me to go to Shreya Polyclinic. She was coming there for my checkup. She said that polyclinic had better equipment,” Yadav said.

According to Yadav’s sister Rekha, who had accompanied the former, Dr Shushila said the condition is alright after reading video x-ray report. “And we were also told to buy medicines from the polyclinic itself,” Rekha reports.

But the medicines did not work. So she had to come to the hospital again. But then doctors did not attend her well in the hospital. After some time she was taken to the labor room where nurses soon declared that the baby in the womb was dead. “Just two days ago they do video x-ray and say that the baby was alright. But later they said that the bay was dead,” laments Rekha. The family reported the incident to the police, but claim that the then DSP Rajesh Thapa ‘was not helpful’. “You people have come here to create nuisance out of nothing,” Rekha quoted Thapa as saying.

As illegal clinics and health care centers are mushrooming in Tarai region, authorities concerned seem oblivious to this. Along with that, a lack of awareness has been leading innocent people to such health facilities. Most often such facilities try to settle the matter before it reaches to the police and some silence it even after it reaches there.

Claims the number of ventilators raised to 900 from 770 before the pandemic ... Read More...

NUWAKOT, Mar 3: Chief Minister of the Province No. 3 Dormani Poudel has said that service delivery to the general... Read More...

Over 100,000 Pfizer vaccines to arrive in Nepal on Monday
6 hours ago

Substation at Nawalpur comes online, electricity supply expected to be reliable
10 hours ago