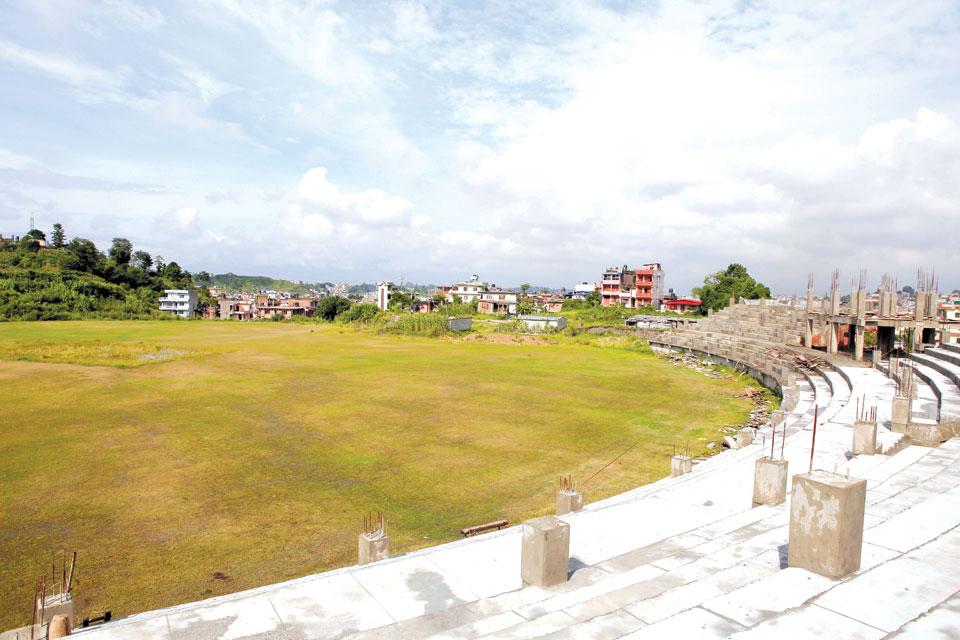 KATHMANDU, Aug 9: Nepali cricket fans’ decades-long dream of watching their national team playing at an international-standard cricket venue at home is getting elusive as the construction of Mulpani international cricket stadium is further delayed.

After failing to resolve the land acquisition issue, the completion of the most awaited cricket venue with a capacity of 13,000 spectators will likely take another three years at the minimum.

Although the first phase of construction work is almost completed, the second phase is in limbo after failing to acquire 3.25 ropanis of land required for the stadium. Without acquiring the area, neither the two blocks of parapet could be built nor could the stadium ground be given its complete shape.

“The first phase of construction will be completed in mid-October. But the second phase work can be started only after the land acquisition row is resolved. The second phase of work alone will take at least three years,” according to National Sports Council (NSC) engineer Bihswamitra Sanjyal, who is assigned as site engineer for the stadium.

The first phase in the stadium construction consists of building three blocks of parapet, leveling the ground, managing drainage system, among others.

The land acquisition row has stopped other tasks as well for the last one year as the landowners did not accept a compensation of Rs 500,000 per ana of their land as fixed by the government.

The landowners however have accepted the government proposal to provide land in exchange of their land in order to resolve the issue, according to Sanjyal.

“There has been an understanding between the government and the locals over the exchange of land. As per the understanding, government will provide an equal area of land to local people, around the same area,” Sanjyal said.

NSC owns a total 294 ropanis of land in Mulpani where it plans to build stadium, academy and its practice ground, hostel, administrative building, and swimming pool among other infrastructures. The land that the Ministry of Youth and Sports has been looking to offer is from the same place.

Secretary of the Ministry of Youth and Sports Mahesh Prasad Dahal said that once the ministry received the file back, it would forward it to a cabinet meeting for final endorsement.

“Once we receive the file back from the Ministry of Land Reform and Management, we will submit it to a cabinet meeting as land exchange scheme must be endorsed from a cabinet meeting,” Secretary Dahal said.

In February, a team from the Department of Survey was mobilized, to find out the exact land that NSC owns in Mulpani to find whether or not the exchange of the land can be conducted without affecting its master plan, prepared by the NSC.

Due to slow government process of land acquisition and exchange of land, the completion of Mulpani Stadium is likely to get pushed back for at least three years.

“If the land issue is not resolved at the earliest, the completion of the stadium will take longer and the total cost will also increase,” Sanjyal added.

“Our estimated cost to complete the Mulpani cricket master plan was Rs 760 million but continuous delay in the work has resulted in increased costs. Now our estimated cost to complete it is around Rs 820 million,” Sanjyal said:  “But there could be further increment in the cost if we don’t sort out the issues on time. The more delayed the work, the costlier will be the stadium.”

KATHMANDU, May 24: The inaugural match to be played at the Mulpani Cricket Stadium’s lower ground has been further postponed... Read More...

HETAUDA, Jan 12:: The construction of a national level cricket stadium has been completed in Hetauda. ... Read More...