MPs not to be suspended upon arrest 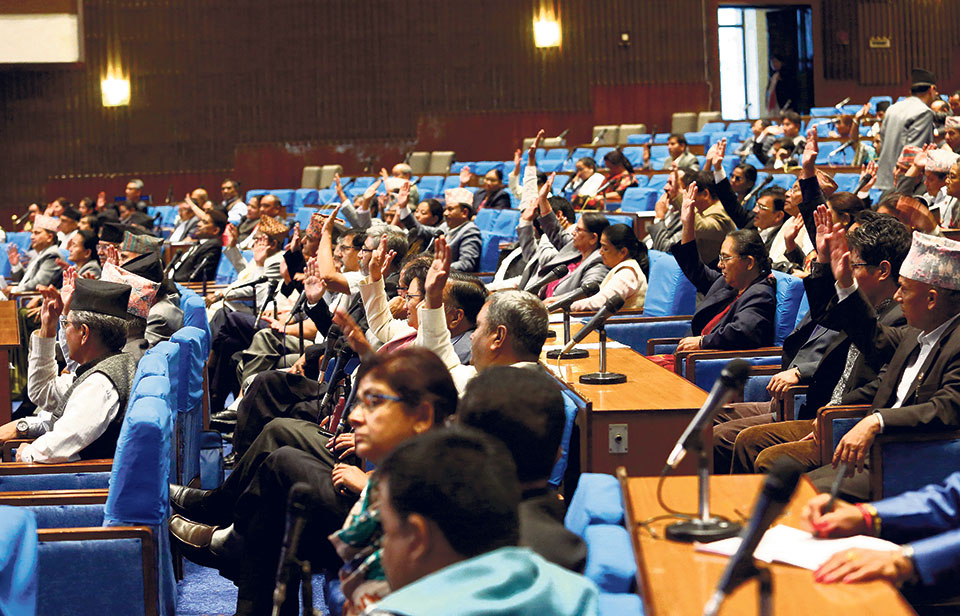 Lawmakers endorse the new Parliament Regulations through voice vote during the parliament meeting on Kathmandu on Friday. Photo: Dipesh Shrestha/Republica

KATHMANDU, June 9: Ending a months-long impasse over a provision on the  suspension of lawmakers, parliament on Friday endorsed the House of Representatives Regulations, with a provision  barring a lawmaker from parliamentary privilege, perks and facilities instead of suspension from his or her post upon being arrested for a criminal offence or any other offence liable to incur a jail term of three years or more.

Endorsement of the regulations has paved the way for the formation of the House panels and appointment of the chief justice, the chief of the Commission for  Investigation of Abuse of Authority (CIAA) and office bearers at the constitutional bodies.

The House meeting on Friday endorsed the regulations through a majority vote following an understanding between the ruling Nepal Communist Party (NCP) and main opposition Nepali Congress (NC). The understanding was to not  suspend a lawmaker until a final court  verdict . The House rejected amendments demanding  suspension while opposition lawmakers withdrew their amendments calling for only seven House panels instead of 10. The ruling and opposition parties were at loggerheads over the conditions under which a lawmaker can be suspended from parliament and over the number of House committees. This had  delayed endorsement of the House panels.

“Keeping in view the demand for suspending members of parliament for criminal and other serious offences, the regulations propose barring them from exercising any powers and  denying them impunity as lawmakers along with their remunerations, perks and other benefits right after  police detention in a criminal  or any other case that is liable to bring a jail term of three years or more,” said coordinator of the regulations drafting committee Krishna Bhakta Pokhrel, while tabling the regulations for endorsement in the House.

However, two previous parliaments after  2008 had followed a provision of suspending the lawmakers in such circumstances.

Some lawmakers from the ruling parties,  while speaking at the House meeting, expressed their discontent over the no-suspension provision. “If a handcuffed person or an accused in police custody still wears the insignia of lawmaker, what  impression would this create in the  public ?” questioned NCP lawmaker Bhawani Khapung.

Nepal Workers  Peasants Party (NWPP) lawmaker Prem Suwal and Durga Paudel of Rastriya Janamorcha voted against the regulations. “A lawmaker will be respected as an honorable person. How  could we jail such a person without first suspending his title or post?”  said Paudel.

The regulations have also provisioned 10 parliamentary committees under the lower house as well as making it mandatory  for ministers concerned  to respond to lawmakers’ questions  within five days. A question and answer session with the prime minister twice a month has also been made mandatory.

In the absence of a Parliamentary Hearings Special Committee, the appointment of the chief justice, the CIAA chief and other CIAA commissioners stalled for months.

After the National Assembly endorses the regulations the bicameral parliament will become fully functional. Ruling and opposition parties have been disputing over the method for fixing the tenure of member. The constitution provisions that the tenure of upper house members  will be fixed through a drawing of lots, at  2, 4 and 6 years.