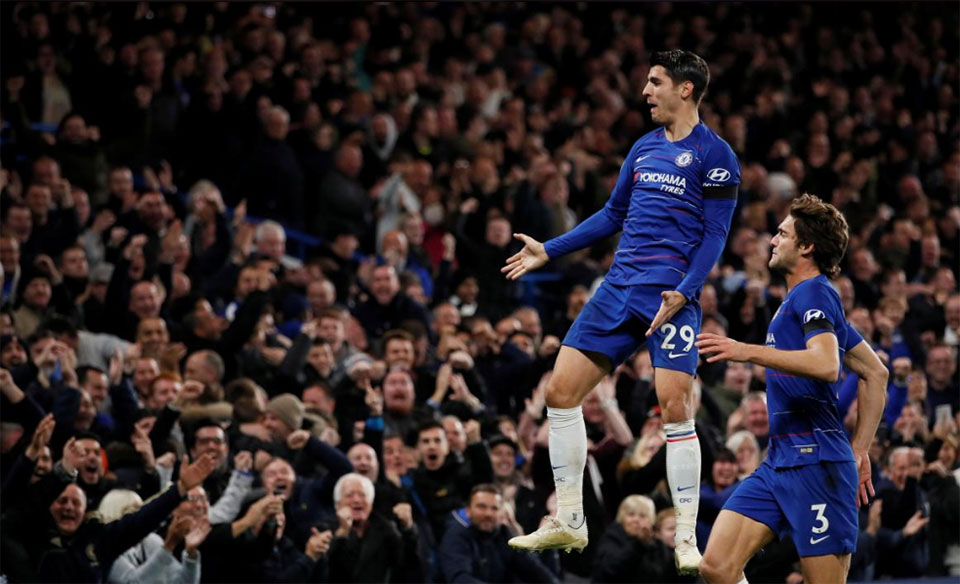 CHELSEA 3 CRYSTAL PALACE 1
Nov 5: Alvaro Morata scored twice as unbeaten Chelsea climbed to second in the Premier League with a 3-1 victory against Crystal Palace on Sunday.

After Liverpool drew at Arsenal on Saturday, Chelsea knew victory would send them second and in-form Spain forward Morata saw them on their way with two smart finishes.

First the 26-year-old skilfully controlled and converted Pedro’s cross in the 32nd minute, then — after Andros Townsend equalised — the often maligned Morata lashed home from a tight angle in the 65th minute for his fourth goal in four league matches.

Pedro then sealed the victory five minutes later, ghosting into the box to convert Marcos Alonso’s cross in the 70th minute for a Chelsea side, who also welcomed back Eden Hazard as a second-half substitute.

Chelsea, one of three unbeaten sides, have 27 points from 11 games — two fewer than leaders Manchester City — and lead Liverpool in third on goal difference.

Palace, meanwhile, have won just twice in the league this season and remain 14th with eight points.

“I can score a hat-trick so it was not the perfect day but we will take the three points,” Morata, who spurned a golden opportunity for a third in the dying stages, told Sky Sports.

Chelsea talisman Hazard was fit enough only for a place on the bench following injury but under Maurizio Sarri the Blues are no longer solely reliant on the brilliant Belgian.

Despite impressing so far this season though, Chelsea had to weather a spirited start from a Palace side who had won two of the previous three meetings between the sides.

Chelsea slowly wrestled the impetus away from their London rivals and Morata fired the Blues ahead before Wilian had a goal ruled out for offside just minutes later.

Palace started the second half stronger and a lovely, dinked through ball from James McArthur saw Townsend surge clear before unleashing a low drive into the bottom corner to restore parity in the 53rd minute.

But that prompted the introduction of Hazard to a rapturous reception, and the 27-year-old’s presence was enough for Chelsea to finish comfortable winners with quickfire goals from Morata and Pedro.